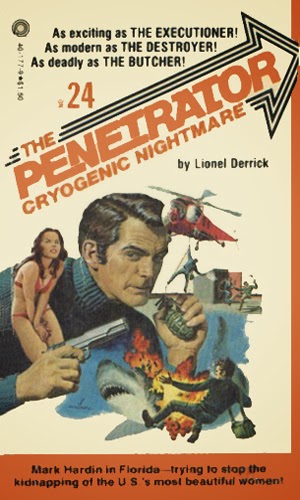 Chet Cunningham redeems himself with this installment of the Penetrator, which is the best one Cunningham’s turned in for a long time. That’s not to say that Cryogenic Nightmare is as masterfully lurid as Cunningham’s #4: Hijacking Manhattan or #12: Bloody Boston, but it sure as hell isn’t as sleep-inducing as #22: High Disaster, which I rank as one of the worst men’s adventure novels I’ve ever read (even worse than Tracker!). But you can’t really blame Cunningham, because like series co-writer Mark Roberts he had to churn out these manuscripts one after another, year in, year out, which is a lot to expect from a guy.

Whatever the reason, Cunningham apparently got his wind back for this volume, which features perhaps the most lurid threat yet – gorgeous women are being cryogenically frozen and sold to the highest bidder! And the man behind it is straight out of the ‘70s: an ultra-styling super pimp who looks like Black Moses-era Isaac Hayes and calls himself Preacher Mann. Unfortunately Cunningham takes his time getting to this cryogenic stuff, with it only given passing mention in the first hundred pages of the 180-page book. Rather, the focus is on Mark “The Penetrator” Hardin going down to West Palm Beach to research Preacher Mann.

Our villain calls himself thusly not because he’s an actual preacher, but because he was known for “preaching” about the benefits of being a vegetarian to his cronies in Harlem, back before his global crime empire got off the ground. Now Preacher Mann operates somewhere out of Florida – Hardin isn’t certain if it’s West Palm Beach or Miami – and he’s so nefarious but so insidious that there’s zero evidence on the guy. Also, despite that we’ve never heard of him before, we are informed that Hardin and Professor Haskins, his mentor back at the Stronghold, have been researching Preacher Mann for the past two years.

Speaking of Cunningham’s earlier work, this one features a callback to his very first installment for the series, #2: Blood On The Strip. Hardin flies his private plane into West Palm Beach and talks to a vaguely familiar mechanic with “sandy” hair and lots of freckles. Hardin knows he’s seen this kid before, and the way the kid’s looking at him Hardin also knows he’s been made as the Penetrator. Sure enough, as he’s driving away from the airport in his rental car, he’s attacked by thugs in a car. Hardin crashes into a swamp, his car exploding due to the arsenal hidden in it, but he secretly escapes, hoping his pursuers figure him for dead.

Only then does Hardin flash back on who the sandy-haired kid was – one of the low-level employees of The Fraulein in Blood On The Strip. Hardin had a few run-ins with the kid in that volume, even slapping him around at some point, and now the kid has sworn revenge. In the years since (interestingly, it appears that real time has passed within the world of the series; meaning Blood On The Strip really took place over four years before Cryogenic Nightmare), the kid has hired himself out to various crime outfits, to act as a lookout for the elusive Penetrator, being that he’s one of the few people to have ever seen him and lived.

Hardin knows Preacher Mann’s up to something big but he doesn’t know what exactly it is. So the first half of Cryogenic Nightmare is mostly made up of the Penetrator going around West Palm Beach and tracking clues. This entails a few brief action scenes like when he crashes a Preacher-owned building and gets shot by a night security guard; luckily, Hardin is wearing a sweater made of “Resistweve” at the time. We’re informed that this material looks like a regular sweater but has bulletproof qualities. Hardin can’t believe there’s such a thing, obviously having forgotten all about the bullet-proof business suit he had made in #15: The Quebec Connection.

A later action scene has Hardin escaping from a few goons who get the drop on him and flagging down the first car that comes by. True to Cunningham form the car is driven by a super-hot young woman named Kristi – a girl who, we’re told, has a “Farrah Fawcett” hairdo. The Penetrator has truly entered the late ‘70s. In the past I’ve been overly critical of Cunningham’s penchant for arbitrarily shoehorning hot women into the lives of his men’s adventure protagonists, but honestly I was missing the point – these books should be escapist fantasies for men, and Cunningham knows what he is doing.

But the wah-wah’d action between Hardin and Kristi never happens…instead the gal treats us to yet another of those Cunningham penchants: the rambling monologue. Hardin ends up sleeping on her couch. He vows to move out asap, because his mere presence could put the girl in jeopardy, but it’s not like he’s in a hurry about it or anything. Indeed, the next we hear of Kristi she answers the phone breathlessly when Hardin calls to check on her, letting him know some men have come over looking for him – and they proceed to threaten her and hang up on Hardin. And what does our hero do? Chalks Kristi up as good as dead and heads on over to the beach to check out the view! (Seriously!)

Kristi isn’t the only girl in the story to suffer harsh torture; Hardin’s girlfriend Joanna Tabler enters the narrative around this point, working undercover. She too is researching Preacher Mann, in some of the laziest coincidental plotting ever. However she doesn’t know Hardin’s down here, and vice versa. So she goes undercover to get a receptionist job at a suspected Preacher Mann front, only for the dude behind the desk to reveal he knows who she really is…a Samoan henchman comes out and strips Joanna down while the dude behind the desk gets up and starts alternately slapping and sucking on her “full breasts.” Then the Samoan takes her to a side room and rapes her!

So as you can see, the lurid, sleazy element missing from Cunningham’s last few novels has returned. The action isn’t as bloody, though; when Hardin stages a mid-novel assault on a Preacher Mann building (the same one Joanna was earlier abducted in, though Hardin doesn’t know this), Cunningham doesn’t dwell much on the gore. Instead he’s more about Hardin’s weaponry and gear, in particular a Resistweve blacksuit that stops a few bullets, “only” bruising a rib or two in the process. Hardin mows through the office building, blasting away with a Mossberg riot shotgun, his ever-reliable dart gun Ava, and some White Phosphorous grenades.

Intel captured in the building raid leads Hardin to a secret island seven miles off the coast of Florida. He has no idea what’s there, just assumes it’s where Preacher Mann is plotting whatever the hell it is he has up his sleeve; Hardin has come across the term “cryo” in the captured papers but doesn’t know what it means. Hardin makes a night reconnaissance on the island and finds it to be a barren, foggy patch of soil. Preacher’s henchmen are beneath the ground, though, as Hardin discovers in a very long sequence in which he takes cover and fights off guard dogs, machine guns, explosives, and even soldiers who pop up out of hidden doors along the island’s main hill.

Busting his way inside, Hardin finds a high-tech complex burrowed into the caverns beneath, all of it quite similar to the later Killmaster novel Deep Sea Death. Here Preacher Mann conducts his cryogenic experiments; Hardin, once captured, is treated to a tour of the facilities per the Bond cliché, and is informed by the muscular, bearded, and bald Preacher Mann that they have not had much success with resuscitating the humans they’ve killed and then frozen. Special mention must be made of the initial Hardin/Preacher meeting, in which Hardin, to bait the Harlem native, starts throwing around the “N-word!” That was pretty surprising to see.

Sadly, the whole “let’s capture women and freeze them” plot is given short shrift; Preacher hasn’t figured out exactly how to do it, and his business model seems a bit skewed. He says something about a problem with the women he steals getting fat, thus he came up with the idea to freeze them, so he can keep them in perfect shape once the clients are sick of them, to be frozen and thawed and shipped out again to the next client. I’m sure there would be much less costly alternatives to this scheme. But already he’s spent a few million on the venture, and he blithely shows Hardin around his SPECTRE-type underworld lair.

Preacher goes one step further by offering Hardin a job, but instead Hardin challenges him to a stick fight(?!), and after a lengthy battle Hardin not only knocks Preacher Mann out but also disarms two shotgun-wielding guards. This takes us into the bloodless finale as Hardin frees Joanna and then sets the place to blow – once the seawater mixes with the leaking cryogenic stuff, we’re told, it will go off like dynamite. Also, Preacher Mann is one of the very few villains in the Penetrator annals to escape, vowing to get revenge on Hardin someday.

Cunningham leaves a lot of stuff unresolved: for one, Hardin never does take vengeance on whoever it was who kidnapped (and killed?) young Kristi, even though he swears over the phone to the kidnapper that he will. And Joanna’s rape is completely glossed over, with the rapist never even being mentioned again, let alone returning so that Hardin or Joanna can dole out some gory payback.

Joanna, reunited with Hardin, doesn’t mention any of her ordeals, and the novel ends with them renting a beach house in Florida and soaking in the sun for two weeks – though Hardin’s already thinking about his next mission, which will have him looking into the dangers of nerve gas.
Posted by Joe Kenney at 6:30 AM