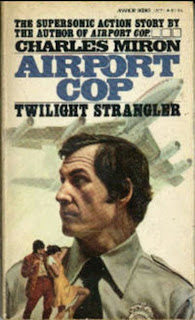 First of all, thanks to Justin Marriott for bringing this obscure, three-volume series to my attention. But then, judging from the dearth of information and reviews on the web, it doesn’t look like too many people have heard of it. All I know is that Charles Miron was a real person and published a handful of novels through Manor Books, this being the only series.

Typical of other Manor series books of the day (like Kill Squad), there are no volume numbers: Airport Cop was the first one, The Twilight Strangler was the second, and Death Flight was the third and final volume. I don’t have the first volume, but if this second one’s any indication Airport Cop is one weird “action series” indeed.

My friends, I may have found another Gannon here, at least so far as the bizarre writing style goes. To be sure, The Twilight Strangler is nowhere as nutzoid, violent, or extreme as anything in the Gannon novels, but it is written in a somewhat-similar screwed-up style. As with Dean W. Ballenger, you wonder if Miron was writing this way purposefully, sort of how Ballenger proved he could write straight narrative in his standalone WWII novels and his men's adventure magazine work.

But then, if this is the way Miron naturally writes, the guy is definitely on a different wavelength. The Twilight Strangler reminded me mostly of that psychedelic “crime thriller” I reviewed a while back, Mystery, only without the fantastical elements. But style-wise it’s very similar, with the characters seeming to exist in a world that is only tangentially related to the book itself. The reader is thrown in and must fend for himself as the author hopscotches perspectives, situations, settings, even time periods, sometimes within the span of a sentence.

For example, I read the entire novel and I still don’t know if the titular airport cop, Verban, even has a first name, let alone what sort of cop he is. The back cover states he’s “chief of airport security,” but that doesn’t seem to be the case in the book itself. In fact it seems like he’s a regular cop, one who possibly specializes in airport crimes. For that matter, it wasn’t until page 60 that I got confirmation that Verban was based out of New York; before that I honestly couldn’t tell if it was Los Angeles or NYC. Actually Verban is identical to the type of cop protagonist you’d meet in one of William Crawford’s novels, and the novel is just as mired in police-world details.

But The Twilight Strangler is almost psychedelic in how it hopscotches across perspectives and situations, Miron never bothering to set up or explain anything; it’s almost the men’s adventure equivalent of Rudolph Wurlitzers’s Nog. I’ve complained before about “POV-hopping,” where an author changes character perspectives without warning the reader through a chapter break or a few lines of white space: Charles Miron takes this to a whole different level, with POVs sometimes changing within the same sentence. Before I read this novel I would’ve said such a thing would be impossible, that every writer would know not to do this. But Miron proved me wrong.

So anyway, Verban, sometimes called “Verb” by his partners, is a New York cop who apparently works the airports. There’s absolutely no description of the character, so I guess the cover painting will have to suffice. When we meet him he’s already on the case; in the first of the novel’s brief murder scenes, a highfalutin model is strangled while shooting a commercial in an airport (I think it’s at JFK, but I never could figure out for sure). Verban is put on the case by his superior, Captain Kinsella, and works it with his new partner, a black cop named Reggie Wasson who is trying to fill the shoes of Verban’s regular parner, Freddie Karp, who is on vacation but returns later in the novel.

There’s also a “policewoman” in the crew, Candace Reuscher, and she serves more as Verban’s partner (both on the streets and in bed) than any of the other characters. Also it must be mentioned that Miron has no qualms with referring to his characters by multiple names in the narrative; it took me a few pages to realize that Wasson’s first name was Reggie, for example. Just like in a William Crawford novel we get a lot of immaterial stuff where these cops brainstorm who the killer might be, going out and tracking down leads, even checking their files for potential suspects.

All this stuff is pointless because we readers already know who the killer is, and he’s not on any of Verban’s lists. His name is Milo Kline, and he is a reclusive sadist who reminded me for all the world of Ignatius Reilly in A Confederacy Of Dunces. He has the same pretentious, stentorian tone and everything. However I couldn’t figure out if Milo was skinny or heavyset, or ugly or handsome; he seemed to be described either way. Why he gets his jollies strangling women is never explained, but he does have the arrogance of Ignatius, thinking of his victims as “immoral women” and etc, so I guess we’re to infer he’s just wiping them out for the betterment of the world or something.

Milo also likes to strangle with antique tools – a barber chair strop, an old hemp cord, even the antenna of a ‘40s television set. This is something which eventually has Verban hitting the antique stores in Manhattan, tracking the guy. A yet another unexplained subplot has Milo calling Captain Kinsella to taunt him before each kill. The murders aren’t limited to New York, with Milo flying around to different aiports to murder various women, among them a lesbian fashion designer, a stewardess, and even a teenager. In almost each case we get several pages from each woman’s perspective, hopscotching around their thoughts with no concern over plot or narrative structure. All of it of course rendered moot when the woman is dead and never mentioned again.

After the “twilight strangler” (so called by the cops due to his penchant for killing at this time) taunts Kinsella that he’s going ot kill someone at Chicago’s O’Hare aiport, Verban goes “off duty” and flies there on his own time, Candace accompanying. Miron builds up a rapport between the two which takes the expected route, though our author is very shy when it comes to actual sex scenes (nevertheless, characters will often reflect back on whopping orgasms they’ve had, in those wily-nily flashback POV sequences). They butt heads with the O’Hare chief cop and, worse yet, find that the Strangler’s struck again, despite their efforts. This gets Verban thrown on a week’s unpaid leave; he uses the time to scout out those antique shops.

The novel gets even more bizarre when Milo goes on vacation(!?) in the Caribbean, where he’s hit on by this hotstuff divorcee who has become a millionaire thanks to her ex-husband; her name is Elyse and she talks like a Bringing Up Baby-era Katherine Hepburn. She takes an immediate sexual interest in Milo, demands he come back to her hotel with her, and further announces they’re to be married(!?). Milo acts again like Ignatius Reilly throughout, fending off her advances and protesting how forward she is. She sticks around for a long time and, surprisingly, does not get killed by Milo, who instead finally manages to “escape” from her several weeks later.

But this is another of those pulp novels where so much time is wasted on inconsequential stuff that the climax is hurried. For example, we could’ve done without a lot of the stuff in the middle half, like Milo’s ordeals with Elyse, or the arbitrary part where Verban just happens to stumble upon an auto theft ring (mirrored in a later scene where Candace stumbles upon a pickpocket). These parts do offer a little action – and Miron doesn’t exploit the violence at all, in fact I don’t think you even read about a single drop of blood in the entire novel – but they ultimately come off as chaff, especially when you consider how abrupt the finale is.

In short, the “climax” occurs over the span of a mere two pages; using Candace as strangler bait, Verban and team scout JFK airport and manage to put the hammer down on Milo just as he’s knocked out the girl and shoved her into back of a Jaguar. Milo slams into Verban’s partner Karp as he speeds away (we never do learn if Karp lives or dies) and Verban gives chase in a Dodge Charger. Half a page is left. Comedically, without the event even being described, Verban is somehow magically able to teleport himself out of his car and onto the hood of Milo’s Jaguar! Like a regular TJ Hooker he manages to pull Candace free as the Jaguar plunges into the Hudson.

And that’s that! We’re informed Milo’s corpse is eventually fished out of the river, but there’s no wrapup or anything. We never learn why he was on his kill-spree or how he even knew who Captain Kinsella was. But while the writing style was unusual and the action sporadic and flimsy, I can’t say The Twilight Strangler was terrible. It had a weird sort of appeal, like an ugly dog you can’t help but keep staring at.

Also Miron has a definite gift for dialog, with the characters trading banter with aplomb. The minor characters sort of spring to life, in particular a kid calling himself “The Big E” who shows up for a single page and steals the entire novel; he offers legal counsel when Milo falls while running along a beach on vaction. I could’ve read an entire book about that kid. Anyway, I have Death Flight, which appears to be about hijackers, so eventually we’ll find out if it’s written in the same sort of impenetrable style.
Posted by Joe Kenney at 6:30 AM

Wow! Never heard of this series at all. And "airport cop" is such an off-the-wall concept I can't imagine anybody greenlighting it for a series. Then again, we're on the second "Paul Blartt" movie, so, what do I know? And James Cagney made a movie where the hero was a guy from the bureau of weights and measures (The Great Guy)... so, I'm waiting for a health-food inspector or meter-maid series to turn up. Mike Steele: Notary Public!

This one sounds pretty amazing. When they start a car chase with a half a page to go you know they're going to have to teleport somebody!

So this is not about someone strangling fans of the Twilight books. Rats.

Great review - and great comments! That Cagney movie Zwolf mentions is really great by the way.