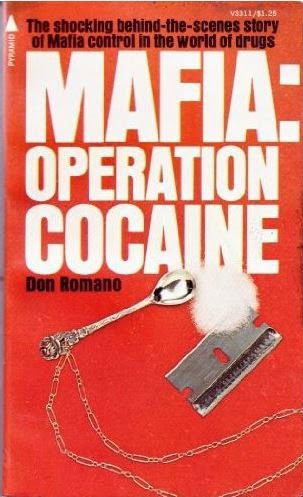 In a way Operation Cocaine is like an installment of Marc Olden’s Narc series, only without a hero; they’re all villains in this story. But it retains the same Byzantine plotting as one of Olden’s books, with every character scheming against the other to get a piece of the cocaine empire. That’s true for the first half, at least, after which the novel almost turns into a sort of Sharpshooter or Marksman variant, with a psychotic lone wolf swearing vengeance against the Mafia…and really busting the shit out of them.

This character is the closest we get to a hero, or even a protagonist: Paul Duray, Belgian-born 45 year-old who lives in ultra wealth and has a lucrative deal with the New York-based branch of the Mafia, which spend lots of money on his top-quality cocaine. The novel opens with sabotage, as the dude who unwittingly carries the shipments of coke up to New York is killed (while thinking about the awesome blowjobs he gets from a New York whore, naturally – I’m telling you, these authors are masters of sleaze). This sets off a chain of events which will, just like in the previous book, end on almost Shakespearian levels of tragedy.

New York Mafia bos Carlos Carriglio, head of the Prescipio Family, vows to find out who stole these three kilos. He has Duray himself investigated, as it appeared to be an inside job, even though Duray is so wealthy, not to mention that it wouldn’t make any sense for him to rob from his own stash. Nonetheless Carriglio tasks his top caporegime, Al Dennono, with looking into Duray and perhaps making him and/or his associates sweat a little, in particular Duray’s top assistant, Flip Hondo. It’s Hondo’s death that sets Duray off and turns him into an ostensible Johnny Rock.

Before that happens though we get a bit too much about Al Dennono and his screwed-up world. Hiding his “lavender” proclivities from his boss, Dennono is gay and is currently smitten with a young male hooker named Nino DeSico who has silicone tits and sometimes, we later learn, puts special silicone attachments around his shaved privates so his male customers can screw him like a girl…! Nino’s got a stupid brother named Baba, whom Dennono is training as an underling, despite the guy’s stupidty – all so Dennono can keep getting special favors from Nino.

This stuff gets a lot of print; there’s even an arbitrary part early in the book where Paul Duray, looking for quick cover, finds himself in a gay bar in Manhattan, and we get lots of description of this lifestyle. But the authors don’t shirk on the straight sex; this comes in the form of Lacey Johnson, a smokin’-hot redheaded “actress” who in pure ‘70s style wears a silver coke spoon as a necklace, so that it dangles in her “impressive cleavage.” Flip Hondo hooks up his boss Duray with her, warning the older man first off that the gal is a fiend for coke, totally addicted to it.

Paul could care less, and takes her back to his swinging bachelor penthouse on Park Avenue. Here we get an explicit sequence that brings to mind the shenanigans in Operation Porno, as first Paul screws Lacey, who we learn cannot achieve orgasm, “regular” style…and then afterwards he covers her nether regions with cocaine, puts some on his own privates, and then they go at it big time!  Harold Robbins couldn’t have written a more over-the-top scene. Not only does Lacey achieve that ever-elusive orgasm, but she also feels like she’s falling in love with Paul Duray, and he’s starting to feel the same for her.

But when Flip Hondo is captured by Dennono’s goons and killed, Paul goes into vengeance mode. Here the novel kicks into gear as he makes short but grisly work of the various flunkies who are part of Carlos Carriglio’s operation. Paul retains two henchmen/bodyguards, hulking “Peruvian Indians” named Tala and Jorge, and the three make for a very impressive team. First they take out “the Scorpion,” a ‘Nam-trained assassin who was responsible for Hondo’s death, paralyzing him with a curare-tipped dart (shades of The Penetrator) and then hurling his car into the bottom of a quarry.

Meanwhile Al Dennono’s storyline continues to get more and more fucked up. For we learn that Nino, Al’s little transvestite playmate, is in a sexual relationship…with his own brother!! You see, I told you these authors know their sleaze! But yeah, Nino and Baba enjoy going at it, and we get a lot of crazed and wild stuff with the two of them, and then it gets even more crazed and wild when Dennono shows up at Nino’s place unannounced and catches the brothers in the act. When Paul and his two henchmen show up and carry off a numb Dennono, there’s a pair of twitching corpses on the bed, something which a puritanical Carlos Carriglio is desperate to keep out of the papers.

Paul Duray could give Johnny Rock and Philip Magellan a class in sadism: his offing of Dennono is particularly novel. They take him to one of Carriglio’s legal operations, a laundromat, and stuff him into a dryer, Paul confident that Dennono will be knocked out of his shock by the heat and the centrifugal force of the dryer, and thus will be cognizant of the horrifying way in which he’s dying. And as the man pleads and bangs against the dryer door, Paul knows he was right. Next up Paul and the henchmen (who he raised as sons) take on a six-man task force Carriglio sends after them.

In a move Rambo would later endorse, the three take positions on the rooftop of a building across from Paul’s apartment building and launch flaming arrows down at the two cars that wait in ambush outside it. The authors are also masters of dark comedy, and this sequence features an almost proto-Simpsons gag, as some random dude in the apartment building happens to be watching a gangster movie on television while the battle rages outside, and when he gets up to turn the channel he’s hit in the head by a stray bullet.

Along the way Paul has learned that the culprit behind the kilo hijack was a guy named Errico Rosario, one of Carriglio's Mafia men and a person Paul had been training to be his second in command. Rosario’s plan was to sow dissent against Paul so that Carriglio would have him killed, and then Rosario would become the owner of Paul’s cocaine empire in South America. As if that wasn’t enough, Rosario has also moved in on Lacey, who figures she’s been dumped by Paul – she feels that her lot in life is to be used by men and then dropped. So she plays right into Rosario’s hands, especially when he offers her some coke.

Using Lacey as bait (and the little nympho, we learn, has introduced him to Paul’s little coke-on-your-privates trick), Rosario hopes to roust Paul out of hiding. But as usual Paul Duray is two steps ahead and captures both of them. Another sadistic death ensues, as Paul takes his captives out on his cruising yacht, strips Rosario down to trunks, and ties him to a line, tossing him into the water behind the boat. This all works up to a gory send-off for Rosario, who is chopped to hamburger by the powerful propellors.

Lacey suffers an equally crazed fate. Paul, feeling betrayed by the girl, leaves her to sulk in her prison of a room as he takes the yacht on down south, announcing he’s due a “vacation” after all this nastiness in New York. Finally he talks to Lacey, playing nice, and offers her a drink. Only, he’s dosed it with a mixture of cantharides (ie Spanish Fly) and strychnine. This leads to a mega-horny and nude Lacey screaming on the deck of the yacht, pleading with Paul, Tala, or Jorge to have sex with her – even threatening to kill them if they don’t. The cantharides, we’re informed, were used by the Peruvian Indians as punishment for unfaithful wives.

Strangely, the authors don’t exploit Lacey’s eventual rape, as Paul figures at length that she’s “had enough” and then he and his two henchmen take their turns with her in a fade to black scene. But when they dock at a Florida port a few days later while a sort of pirate celebration is going on, they find that Lacey is dead, killed by the fatal cantharides poisoning. This isn’t something Paul intended to happen, but he’s as resourceful as ever, disguising the girl’s body as a mauled pirate victim and dumping it into the water along with the other effigies – part of the bizarre annual celebration, we’re told.

The reader will of course understand the novel is headed for a dark conclusion, and here in the home stretch they dole out the final betrayal. Jorge and Tala, who as mentioned were raised from childhood by Paul, have been given an offer by Carlos Carriglio: get rid of Paul Duray and his cocaine empire will be theirs. This is a savage scene, as the authors cut straight to a nude Paul Duray, cast naked and adrift in the middle of the ocean, with no hope of rescue or of swimming to safety; we’re informed in one of the most abrupt but disturbing finales ever that he’s nothing more than a mauled corpse a mere three hours later.

While taking a bit too long to get going, Mafia: Operation Cocaine is nevertheless a masterful blast of lurid pulp, which makes it a shame that the authors’s next installment, Operation Hitman, was their last for the series.
Posted by Joe Kenney at 6:30 AM

No, there is another book, Mafia: Operation Hijack.

I've never read Allan Nixon, but Robert Turner was a well regarded and prolific writer from the pulp magazine era of the 1940s and the noir paperback field of the 50s. His autobiography, SOME OF MY BEST FRIENDS ARE WRITERS (BUT I WOULDN'T WANT MY DAUGHTER TO MARRY ONE), Sherborne Press, 197?, is a rich look into a pulp writer's life and is well worth tracking down. These Mafia books are late in his career. I think he also ghosted a Shaft novel or two around this period.

Stephen, thanks a lot for the comment. Your mini-bio of Turner made me recall/realize something -- he's mentioned in the "Spider" book by Robert Sampson. Turner was Norvell Page's last editor on the Spider magazine and supposedly rewrote Page's manuscripts significantly. Your post reminded me of this factoid because Turner's "Some Of My Best Friends" book is referenced by Sampson; apparently in this autobiography Turner puts down Page's "Spider" tales as "typical pulp garbage," or something like that. At any rate he is not kind to Page's writing. When I read Sampson's book I failed to put it together that this was the same Robert Turner who later co-wrote the uber-sleazy Mafia: Operation novels! Funny how it all comes together!

hey Joe, are u going to do a review of Operation Hitman next?

Yep, I'll read that one next, then move on to the two by Eiden (Hijack and Loan Shark). Zwolf reviewed Operation Hitman a few years ago, if you're interested in checking out his take on it -- sounds like another sleazy hit courtesy these two authors.