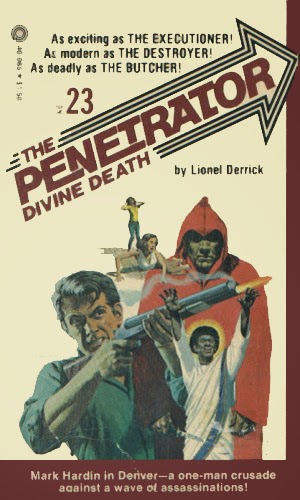 After the boredom of the previous few installments, Divine Death gets things back on track for the Penetrator series.  Mark Roberts again turns in a volume filled with violence, blood, and occasional right-wing sermonizing, as Mark Hardin takes on the cult explosion of the late ‘70s.

Similar to Death Merchant #36 and Chameleon #2, Divine Death trades on the cult trends of the day a la Jim Jones and Sun Moon, as a Fiji-born “messiah,” Vanua Levu, heads the Church of the Final Coming, and countless youngsters flock to him. Of course, the shaven-headed Levu harbors evil intentions, his cult just a front for his Communist-backed plans, and he’s surrounded by legions of gun-toting goons in robes. He also enjoys killing people with poisonous mollusks from his native Fiji.

Hardin happens to be in Denver on vacation; curiously, this volume almost appears to be a sequel to Chet Cunningham's earlier #20: The Radiation Hit. I’ve figured for a while that Roberts and Cunningham were writing their volumes at the same time, hence the lack of continuity, so perhaps this Cunningham installment was the most recent one to have been published while Roberts was working on Divine Death.

The Penetrator’s alerted to this latest menace when he hears about the murder of an undercover cop. This guy had infiltrated the Church, which has its sole temple in Denver, so as to find a pair of runaway girls – part of the cult’s schtick is taking legal guardianship of runaway kids and keeping them from their parents. However it appears that these kids are soon brainwashed and exploited, with attractive girls for example being thrown into the temple harem, where they are expected to openly prostitute themselves on the streets for the good of the Church.

Hardin gets pissed and decides to do something about it. To Roberts’s credit, he doesn’t waste time getting to the good stuff. Hardin visits the Denver temple and soon suspects foul play, propositioned immediately by a drugged-out “temple whore” and later bullied by a pair of brown-robed thugs. Of course, Hardin quickly butchers the thugs, only to find his photograph being snapped. He chases the photographer down, and after destroying the negatives has a new ally; reporter Terry Lucas, who himself is researching the cult.

Lucas is researching a pair of local sisters who have been legally adopted by the cult, and he suspects they were more so just abducted. When Hardin gets wind of this – coupled with the murder of that undercover cop – he’s really pissed. Reasoning that the usual “red tape” would delay anything from being done soon enough, Hardin charges in to the rescue. This is a pretty good action scene that starts off as a soft probe of the temple, but once Hardin has freed the girls – who have been drugged and put into the cult harem – he goes back for a hard probe, killing with impunity.

Unusually for the series, Hardin is caught. This is a strangely-written sequence, though, almost clunky in a way. Roberts keeps cutting over to Levu’s security thugs, a group of brown-robed sadists, as they watch Hardin on hidden monitors. Yet these guys keep biding their time, even after Hardin’s escaped with the girls(?!), and then don’t pounce on him until he’s come back into the temple and found evidence of a Moscow-backed plan to assassinate key figures in the US. I mean, how did they know he was going to come back after leaving with the girls??

Anyway, Hardin is strung up and tortured, but the thugs aren’t sure if he’s yet another undercover cop or the Penetrator himself. Ultimately it doesn’t matter, as Levu himself trundles out another of his precious mollusks, stinging Hardin with it. The Penetrator uses his Indian training to shut off parts of his body so as to funnel the poison “harmlessly” through his system, all while it appears as if he has died; Roberts writes variations of this scene at least three times throughout the rest of the novel, as Hardin keeps reflecting back on it.

Now that Levu’s people think he’s dead, Hardin is free to…well, to continue on just as if none of it the “death” stuff ever happened. He knows from his probe of the temple that 60-some people across the US will be targets of the cult. He also knows that the killers are brainwashed assassins who have been programmed Manchurian Candidate style, however he doesn’t know who the killers will be, nor who their targets are. And since there won’t be time to expose Levu, the Penetrator himself will have to kill the would-be killers.

After a pointless meeting with one of Professor Haskins’s academic friends, Hardin begins a whirlwind tour of the US as he flies around to each stop of Levu’s “final coming” tour – the assassinations will take place in each city, the assassins being activated by key phrases in the speech Levu will give at each venue. The reader must be prepared for long dialog sections of Levu’s vitriol, much of which sounds like it could come out of Tilt!.

Hardin flies to each city, shows up at the rally, and watches the crowd to see who might be activated by Levu’s words. Then Hardin will follow after the assassin, stopping them before they can get their target. A humorous thing is that Hardin shows absolutely no mercy to these brainwashed assassins, blowing their heads off whether they be male or female. Yet they’re always just kids for the most part, easily-swayed youth who have been perverted against their will by Levu’s people.

Even Hardin is exhausted by the time he’s flown around the country and taken out so many assassins. Again his reasoning is that the Feds or whoever wouldn’t act in time to stop the murders, but he does retain the help of reporter Terry Lucas. Also the Penetrator, a wanted felon so far as the law is concerned, is able to talk the would-be targets into faking their deaths for the press! All so Levu and his Russian backers will believe that the assassinations are proceeding as planned.

It culminates in a quick climax in Florida, as Hardin storms Levu’s hotel room and blows away his henchmen. This includes a memorable scene where one of them falls into a tank filled with those poisonous mollusks. Levu himself is strung up, with evidence of his plot scattered beneath him. After which we get a quick wrapup where Hardin’s at dinner with his girlfriend, Joanna Tabler, as well as Professor Haskins, wondering when he can get a real vacation.

Roberts writes a prologue and epilogue that promise an interesting future installment. A Mafia don named Federico Calucci, who briefly appeared in #17: Demented Empire, is still trying to kill the Penetrator and collect the large bounty that’s been placed on his head. In the prologue Calucci deduces that the Penetrator must be using a computer to determine the locations of his strikes, and by novel’s end he’s gotten confirmation of his guess. Calucci then does what any other Mafia don would do – he hires a friggin’ ninja to kill the Penetrator!!

I have no idea when this storyline will play out, but it goes without saying I’m looking forward to it. Anyway, Divine Death was pretty good, and while not perfect (and a little clunky at times), it was definitely an improvement over the previous couple volumes.
Posted by Joe Kenney at 6:30 AM

Man, I haven't read any men's adventure paperbacks in over a year. Need to get back on that wagon. You've moved ahead of me in the Penetrator series too. Does the FBI still have that special task force chasing him? I wonder if that ever pays off.

Not withstand its culminating in a quick climax in Florida, I would have thought that a "Penetrator" series would have been a little more risqué.