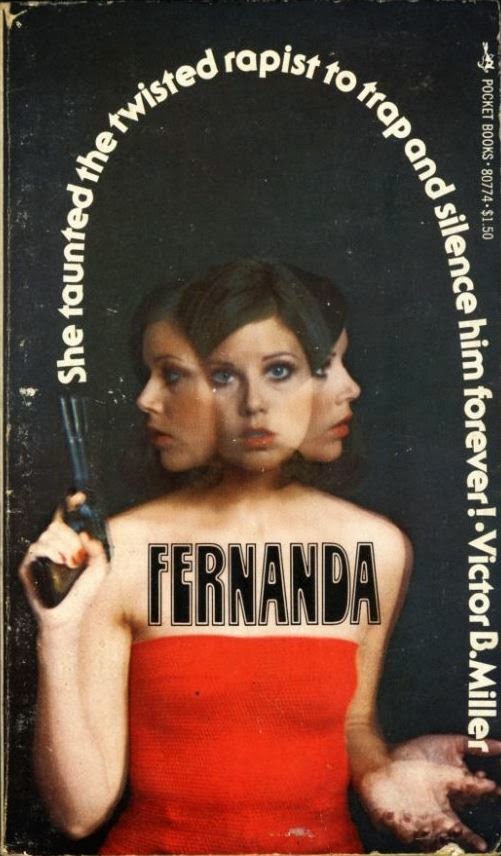 With a cover and slugline that could come off a lurid men’s detective magazine (“She taunted the twisted rapist to trap and silence him forever!”), Fernanda is a PBO suspense thriller which is narrated by our heroine, New York City private eye Fernanda (no last name given).

At 157 pages of big print, Fernanda itself is pretty lurid; our hero’s modus is taking out rapists, and to do so she poses as rape bait. This generally gets her in trouble with the law for entrapment, and there’s also of course the danger issue, but Fernanda doesn’t give a shit. She’s more Hatchett than Jana Blake, though of course she’s just as hot as either of them, with “massy” breasts that even she herself likes to oggle. (“Massy,” we’re informed, is a term a doctor once used to describe Fernanda’s big ol’ breasts.)

Victor B. Miller, who would soon go on to fame as the screenwriter of the first Friday the 13th film, goes for a hardboiled narrative; Fernanda relays her tale via snappy, short sentences, sometimes to the detriment of actual plot and content. For example, characters just show up in the narrative with no setup or explanation, which causes for some confusion. Fernanda herself does little to explain her own actions or thoughts.

But we know her from her actions, and my friends, the lady’s a bit callous. For example, an attractive woman named Liz Conlon attempts to hire Fernanda, asking her to track down Neal Ackerman. Liz claims that, after a few months of no-sex dating, Ackerman one night raped her. After asking Liz what kind of clothes she wore on these dates, and how she would taunt Ackerman with her looks, Fernanda bluntly tells her, “You weren’t raped. You were taken up on your word.”

Meanwhile Fernanda has bigger fish to fry. There’s a killer-rapist stalking Washington Square Park, and Fernanda shoos Liz Conlon away and gets ready to play rape bait that night. But Fernanda when it gets down to it is no Hatchett; the unseen rapist grabs her from behind, and a suddenly-terrified Fernanda just lets him lead her away! Forgetting all about the Beretta in her purse, Fernanda allows herself to be thrown to the ground, and knows she’s about to be raped and possibly mutilated – but can do nothing to stop it.

It’s only the sudden appearance of her assistants, Frank and Alice, that keeps her from being raped. The still-unseen dude (it’s pitch black in the park) rushes off, knife flashing…and poor Alice is gutted! Now Fernanda loses her PI license, as well as her gun permit, really brought to justice given that her entrapment angle has lead to someone’s death. Not that this stops her from continuing to work; she even decides to take up Liz Conlon’s case.

From prints on the scene and Fernanda’s hazy impressions, they now know a guy named Michael Dunlop is the rapist-killer. But the cops can’t find him, and he starts calling Fernanda to taunt her. Oh and meanwhile she screws Frank, whom she has a casual sex thing going with; the sex scenes are fairly explicit, with those “massy breasts” getting fondled, but yet again we have that weird conundrum where a male author writes a graphic sex scene from a woman’s perspective.

Dunlop really has it in for Fernanda, and when she goes out to entrap Neal Ackerman, the “pseudorapist” as she calls him, she comes home to find the butchered remains of the young woman who lived next door. Here again we have another of those characters thrust on us with no setup; the cops on the scene keep talking about “Bonaventura,” who apparently is a top detective, and Miller takes forever to bother informing us that the dude is Fernanda’s ex-boyfriend.

Bonaventura, who still cares for Fernanda, demands that she have 24-7 police protection. Fernanda quickly ditches them, still attempting to entrap Neal Ackerman. Truth be told, this Ackerman stuff is uninvolving and really just serves to take up space. It’s played more for laughs, with Fernanda quickly deducing that Ackerman is a closeted gay; eventually Liz Conlon takes him back, and soon enough they’re coming to Fernanda for couples counseling. It’s all very strange and has nothing to do with the main story, which is Dunlop’s war of terror on Fernanda.

It all plays out on more of a suspense/terror aspect, which obviously calls to mind Miller’s later Friday The 13th work, only with less violence or thrills. Instead, Fernanda will hopscotch around New York with Bonaventura and a legion of undercover cops, only to come home and find the butchered remains of murdered women outside her door. In another incident she discovers that the crotches have been cut out of all of her pantyhose. Fernanda will spend a moment or two quivering in terror, and then she’ll engage Bonaventura in another of the novel’s fairly-explicit sex scenes.

Speaking of which, Miller introduces a goofy subplot late in the novel where Fernanda learns that Dunlop has a sister named Barbara Laidlaw who is a hooker in a high-class brothel on 52nd Street – the girl’s last name eliciting some laughs from Fernanda. But coincidentally enough, Fernanda’s own sister just happens to be a high-class hooker, and is able to arrange an interview with Mrs. Loesser, the proper and elderly lady who runs the brothel out of her posh apartment, which is done up like it’s the 19th Century.

Fernanda poses as a reporter who wants the inside story, with all sources protected and anonymous…and Mrs. Loesser likes her so much that, when a picky john arrives who has already had each of the three girls Loesser currently employs, the old woman asks Fernanda if she’d like to earn a hundred bucks! And, so as to get more time with Barbara, Fernanda agrees! Coincidence continues to abound when the trick turns out to be an old flame of Fernanda’s, a guy she dated in college but later dumped because he was terrible in bed.

After screwing the guy in a hasty scene, Fernanda’s able to get more info on Michael Dunlop from Barbara – he is into knights and liked to bury things when he was a kid. Implausibly enough, this provides Fernanda with the angle that allows her to figure out where Dunlop’s been hiding – in The Cloisters. Once again ditching her police cover, Fernanda races out for the place shortly before closing. She’s certain Dunlop has been hiding on the grounds, secretly living there.

The Friday The 13th element is strong in the climax, as Fernanda sneaks around the spooky, deserted Cloisters, searching for a serial killer. And she doesn’t even have a weapon. Miller introduces a last-minute twist that’s believable but kind of stupid, as it turns out Dunlop hasn’t been the person stalking Fernanda all this time. But regardless it still sees the expected ending, with a dangerous psycho chasing Fernanda through the darkened cloisters, as Fernanda desperately tries to hide from him.

There are a ton of “Also by Victor B. Miller” books listed on the first page, but a little research proves that they were all Kojak novelizations. Perhaps Fernanda was his only standalone novel, I’m not sure. His writing for the most part is good, with fluid dialog and strong description, but the hardboiled vaguery detracts, and sometimes confuses.

But overall, I’d say Fernanda was pretty enjoyable – nice and lurid, with a sleazy ‘70s New York vibe. And it’s so short and breezy you’ll blast through it in no time.
Posted by Joe Kenney at 6:30 AM

Great piece, Joe. I own ANGEL's BLOOD (Playboy Press) and HIDE THE CHILDREN (Ballantine Books) by this guy. I have yet to read them, though. He wrote other novels such as Windborne(Bantam Books);
American Dynasty (Dell Books);
Toga Party (Fawcett Books);
The Glory Sharer (Jove Books);
Giving In To Get Your Way, (Delacorte Press), reprinted as Aikido In Everyday Lif (North Atlantic Books); The Book Of Worries (Warner Books). Continued success--Martin

Martin, thanks for the comment, good to hear from you. None of those books were listed in Fernanda, so that's good to hear the guy wrote more than just Kojak novelizations. I looked up those books, and some of them look like they might be worth seeking out someday!