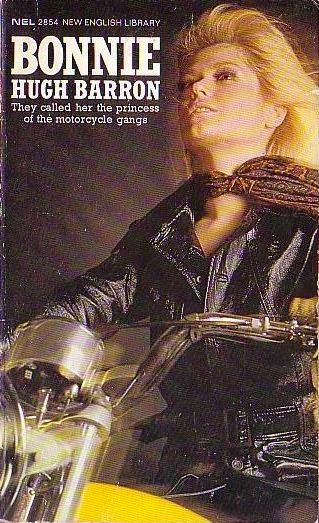 If ever there was a Hirschfeld novel that should’ve been an AIP biker movie, this is the one. Curiously, it was never reprinted under Hirschfeld’s name in the US (more of which below), and it only appeared under his “Hugh Barron” pseudonym in the UK. The “Oscar Bessie” edition was published by Domino Books, a sleaze imprint of Lancer, however be aware the novel isn’t explicit, really, and not just due to the year it was published (1965); Hirschfeld is very much in his metaphorical mode this time out, with climaxes compared to cresting waves and etc.

Bonnie shares almost the exact same template as a later Hirschfeld novel, Cindy On Fire. Like Cindy Ashe, Bonnie Dixon is 19, beautiful, blonde, and bored. Living in Bayville, an area of Long Island, Bonnie like the later Cindy is saddled with a loser of a fiance, super-square Bob Horner. The dude doesn’t even believe in premarital sex! The novel opens with yet another of his refusals, as Bonnie implores Bob to take her one night after a date. Throwing a fit when she’s turned down for the umpteenth time, Bonnie runs away from Bob’s car, whips off her clothes, and runs nude along a deserted stretch of the beach.

After spying on a couple having sex, Bonnie swims nude in the ocean. When she lays back on the sand she’s almost raped by a pair of bikers. She’s only saved by the appearance of their leader, a muscular, good-looking dude who wields a riding crop. This is Mike Shaw, leader of the Apaches “motorcycle club.” The two would-be rapists are Leo and Buster. Mike gives Bonnie a ride home, and she’s so excited she can’t sleep that night and must pleasure herself (again, written in a very metaphorical style).

Bonnie, increasingly distant from her parents and Bob Horner, runs into the Apaches again, and tells them she wants to join. But she doesn’t just want to be a “squaw;” she wants to be a full-fledged member, with her own bike. First though she must pass the “Ordeals” all new Apaches must face. The first ordeal is a mugging in a park, Bonnie distracting a pair of random dudes while a few Apaches swoop in and attach them, and then Bonnie must join in the fight. She enjoys it so much she nearly beats the victims to a pulp.

The next ordeal is a brutal fight with another female Apache, while the rest of the gang watches. It takes place in an old farmhouse the Apaches have taken for themselves, and Bonnie is able to overcome her more-powerful opponent, using her wits and her speed. This leads immediately into the final ordeal, which first has Bonnie bathed by “handmaidens,” and then, nude, put up on an auction block! The Apaches bid for her, and the winner gets Bonnie for the night.

Hirschfeld, realizing he was required to write a sleazy tale, goes all the way – a female Apache bids for Bonnie at an exorbitant cost. This is Paula Hart, gorgeous redhead with a shitkicker bod. Paula takes Bonnie to a separate room and has her put on thigh-high boots and hands her a whip. Yes, friends, Hirschfeld really goes for it, here – Paula gets off on being whipped, and urges Bonnie to lash the hell out of her, after which Paula crawls on her hands and knees to an exhausted Bonnie and starts dining at the Y…friends, I never knew ol’ Burt had it in him!

Three weeks later and Bonnie’s such a diehard Apache she threatens to usurp Mike’s position as leader. She has her own crew now, in particular Paula, Leo, and Buster, and she and Mike are on the verge of open warfare. Not that this stops Bonnie from occasionally screwing Mike. Hirschfeld also intimates that Bonnie’s screwed most of the Apaches, but wisely, for such a short novel (124 pages), he limits the narrative to just a few named characters. Strangely, Bonnie is still engaged to Bob Horner, who not only still refuses to have sex with her, but apparently is oblivious about her secret life as an Apache.

Now our antihero needs her own motorcycle. One thing I should mention is that Bonnie is pretty scant so far as biker stuff goes – I mean, motorcycle models aren’t mentioned, and there’s maybe two or three parts where people even ride their bikes. It’s more about Bonnie’s need for constant thrills, and the increasing levels of sadism and danger she compels her fellow Apaches to. It’s also your typical morality play-type tale, about the dangers of peering too far into the abyss.

Anyway, Mike Shaw pokes fun at Bonnie that she could just ask her loaded parents for the money to buy a bike. But Bonnie’s plan wins yet more favor from the Apaches – she’s going to rob her own parents. Once again employing Paula, Leo, and Buster, Bonnie and her three followers dress “completely in black leather, including full-face wind masks and leather helmets” and head for Bonnie’s home. There they break in, threaten Bonnie’s parents with knives, tie them up, and raid the safe.

But before Bonnie can even buy a bike, she goes back to the farmhouse, where new Apaches are being inducted…and bids on the new girl for herself! This is buxom, vixenish Leah, who is game for a little lesbian fun with Bonnie, though again it doesn’t drop into outright sleaze. I mean, to be sure, there’s lots of dirty stuff going on, but it’s written so “poetically” that it never descends into porn. Bonnie has outbid Mike for Leah, which furthers the potential Apache rift, something compounded when Bonnie gets her own chopper and starts leading around her own little crew.

The Apaches are at war with the Monarchs, a gang from a few towns over that greatly outnumbers the Apaches. Mike has never been able to defeat them. Bonnie knows that if she comes up with a strategy to destroy them, she’ll immediately become the leader of the Apaches. Her plan is as usual mean-spirited and crazy; she breaks into a beach house, hides weapons in it, and invites the Monarchs over for a big party.

Having the “squaws” and other female members “be nice” to the Monarchs (including the memorable image of Leah standing over three satiated and unconscious Monarchs), Bonnie gets the other gang nice and drunk while she and the Apaches stay sober. Then, after Bonnie’s had (unfulfilling) sex with the Monarch “war chief,” she blows a whistle and the battle begins. The Apaches beat the shit out of the Monarchs, trashing the beach house in the process.

A recurring element – same as in Cindy On Fire -- is that Bonnie cannot achieve satisfaction in anything, especially sex. Constantly spurred to greater lengths, she ends up screwing Mike Shaw yet again, and then racing with him on the night roads at top speed. When a cop gives chase, Mike attempts to lead him to his death, but Bonnie panics and crashes herself, saving the cop’s life. She’s sprung from jail, and it’s even worse because her parents and Bob Horner are even more understanding and etc.

But it’s worse with the Apaches – Bonnie goes to the farmhouse to discover that she’s now persona non grata, thanks to her saving a cop’s life. She has to murder someone to make amends with the gang, or they’ll kill her. When Bonnie refuses to kill a bum that night at a park, she runs from Mike and Paula, almost killing the former with the wrench she was supposed to use on the bum. Bonnie, just like Cindy Ashe, ends up running to the man she’s treated like shit since page one – her fiance, Bob Horner.

Humorously enough, Hirschfeld only bothers to inform us here in the eleventh hour that Bob was formerly a collegiate wrestler, and is still a big and muscular guy! (The image previously presented to us clearly made him out to be a 90-pound weakling.) The couple goes to the beach, where Bonnie unloads her story to a noncommittal Bob. Then, right on cue, Mike, Paula, Leo, and Buster show up, staging an ambush right where this whole story began.

Would you be surprised that Bob Horner makes short work of the three men? Better yet is Bonnie’s fight with Paula, who comes at her with a knife. This is a pretty vicious catfight, which ends with Bonnie finishing Paula off with “a perfect karate chop” to the throat. Then Bob, suddenly the man, hops on one of the choppers, tells Bonnie to get behind him, and blasts off! Then he insists they swim nude…and have sex right there on the beach!

And of course, just like Cindy Ashe who too was reunited at long last with the man she’d treated like shit, only to find he was the perfect match for her, Bonnie Dixon finally knows true satisfaction and happiness with Bob Horner. As mentioned, it’s a morality play, or whatever you all it, only one filled with leather-clad biker chicks and lesbian sex and occasional mentions of “pot parties.” In other words, it’s pretty great.

Maybe the one thing holding Bonnie back from true greatness is, again, Hirschfeld’s ornate style, which admittedly isn’t as busy here as it is in some of his other books. And also you have to admire how much he packs into so few pages. Given that Bonnie was never reprinted under his own name, you have to wonder if Hirschfeld maybe disowned it, but I think there might be another story there.

Bonnie was first published by Domino, as mentioned a Lancer imprint; this NEL reprint is copyright Lancer Books. When Hirschfeld reprinted his “Hugh Barron” books in the ‘80s, Bonnie was not included – but then, all of the other Hugh Barron novels had originally been printed by Pyramid Books. Lancer had been out of business since September 1973. So what I’m trying to say is, maybe Bonnie was never reprinted in the ‘80s because Hirschfeld couldn’t secure the rights to it.

Who knows. At any rate Bonnie is pretty fun. Here’s the cover of that original Domino/Lancer edition, from 1965, which not only gets it wrong by making Bonnie a brunette, but also by making her look like a drag queen: 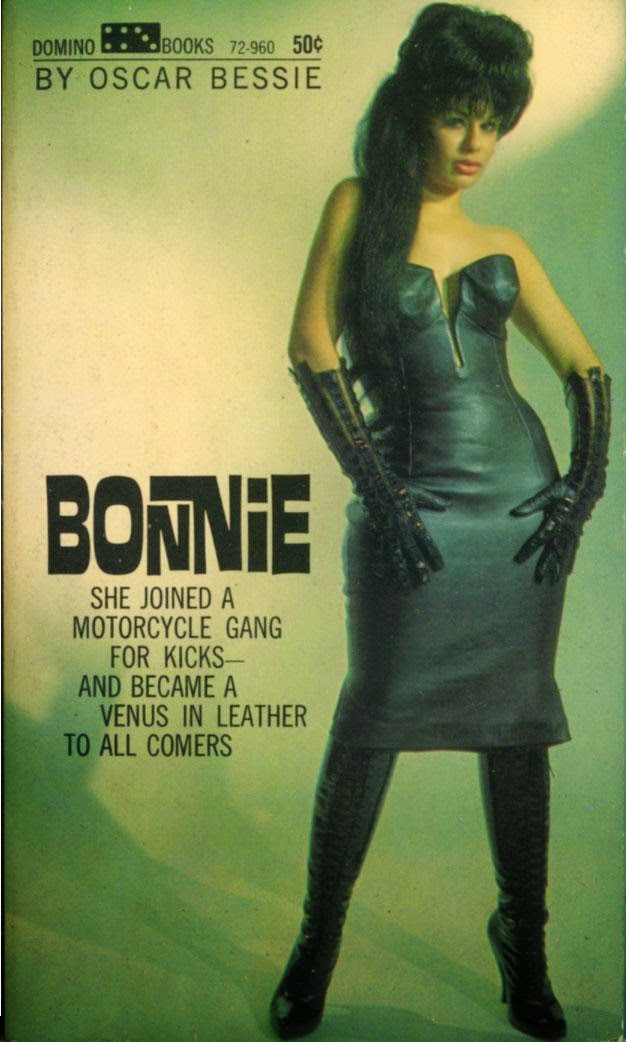 It's the other way round: I think Amy consciously went for that late '60s drag queen look!