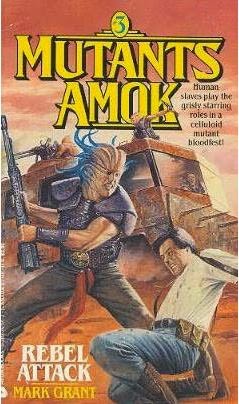 The Mutants Amok series continues to be a gross-out splatterfest of gore, projectile vomiting, explicit sex, and literal shit eating with this third volume, which once again sees author David Bischoff (ie “Mark Grant”) not taking his material seriously in the least.

Rebel Attack picks up soon after the previous volume, but a few questions from that one remain unanswered – like if BrainGeneral Torx, the main villain of the series, is truly dead. As we’ll recall, he had a climactic sword fight with loser hero Max Turkel in Mutant Hell, but we never saw the finale of it; instead, Turkel just informed the others that he’d chopped off Torx’s hands and the mutant sadist then plummeted to his doom.

Turkel’s sticking to his story this volume, with the added info that Torx apparently blabbed lots of info before falling off that mountain; like for example how he sold hotstuff blonde Jennifer Anderson to a mutant movie producer named Algernon Waugh. Jennifer is the true love of teenaged hero Jack Bender, who meanwhile has gotten serious with sexually-insatiable Jill Morningstar, the classic rock-listening, M-16 wielding American Indian beauty he met in the previous volume.

Jennifer Anderson, missing since the first volume, plays the central role in Rebel Attack, which makes for a problem, because she’s naïve, bland, and boring. Also, the material with her skirts too far over the line of satire and into slapstick, as Jennifer finds herself in Hollywood, now renamed “Hollyweird,” which has been taken over by mutants. It’s all just like the Hollywood of old, with despotic mutant moguls and lowly screenwriters who are treated like shit (even forced to eat it), and it’s all about as unhinged as a Looney Tunes cartoon.

Anyway, Jennifer is brought to the attention of famous mutant director Foxtrot Bennington-Spleen, who takes one look at Jennifer’s blonde hair and big breasts and announces that she’ll be perfect for his new film, Blade Babes of Babylon. Spleen is British, just like Waugh – for some reason Bischoff has the ruling elite of Hollyweird all be British mutants – but whereas Waugh is dandified and “cute,” Spleen is an overbearing drunk. Jennifer agrees to the film, caught up in the excitement of being a star, not realizing that this will be a snuff film and she, like all other human actors, will be killed for real in the finale.

Meanwhile, in one of the novel’s top gross-out moments, Max Turkel discovers that he now has a robotic liver. Secretly put in him in the previous volume by his “ally,” BrainGeneral Harten, the liver announces itself to Turkel in a gory Alien hommage as it pops out of his abdomen, stating that it does not like alcohol – which explains why Turkel’s been puking so much. The liver is also a conduit to Harten, who demands that Turkel head on into Hollywood and kill the mutants who have Jennifer Anderson.

It turns out that Foxtrot and Waugh are involved with mutant movie mogul Hairy Kahn (seriously) in a black market gene-splicing initiative. Their goal is harvesting the genes of famous celebrities of the past, mixing them with the genes of healthy modern humans, and whipping up perfect actors! (Don’t laugh, this is exactly how Serpentor was created.) But this gene-splicing deal is pretty dangerous, so far as Harten is concerned, and he explains to Turkel that it’s in Turkel’s best interest to do his request, mostly because it’ll give Turkel the chance to kill a bunch of mutants.

The gang appropriates a mutant “MV,” aka motorized vehicle, which is described as an “armored Winnebago.” Curiously, despite being built up so much, the MV doesn’t even feature it in the climactic assault on Kahn’s fortress, as Turkel et al must find a new ride when the MV’s wheels are stolen in LA. Bischoff does this throughout, building up characters/incidents and then brushing them aside, like the late introduction of a “halfsie” named Joe Brown who looks identical to Elvis (having been created by an Elvis-obsessed mad scientist), a character who seems like he’s going to be a lot more important than he actually turns out to be.

Action scenes are a little more limited this volume. More focus is placed on the surreal, violently slapstick world of Hollyweird, which comes off as a scatalogical spoof of the real Hollywood. We have Hairy Kahn walking around in his “sleazure suit,” making writers named after Ernest Hemmingway literally eat shit, as well as Kahn flunkies who do reenactments of Hollywood’s more sordid stories, like Herman Makiewicz puking at dinner and then delivering an immediate quip, or even more grisly bits like the Black Dahlia murder.

But it’s all just so intentionally goofy; I mean, Turkel’s robotic spleen, when it returns into his body, even bats its mechanical eyes and says “Th-that’s all, folks!” Even the minor details are goofy, with tidbits like “mutant Reebok shoes” and even “Mutant Top Forty” radio, which as described sounds a lot like modern death metal. (Jack becomes a huge fan of it during the long drive to LA.) While some of this is funny, ultimately it robs from the novel, as you can’t take it seriously. A little jokery is great, but too much and the entire edifice will collapse. That basically happens in Rebel Attack.

Oh, and meanwhile Jennifer falls in love with Algernon Waugh, the mutant. We never get a thorough description of Waugh, but apparently he’s “cute” and a pure gentleman, very refined and British – so refined in fact that his Hollyweird pals think he’s gay. But Waugh proves himself very much straight in the novel’s longest and most explicit sex scene, as Jennifer practically throws herself on him. We get thorough graphic detail here, just as in the sex scenes of previous installments.

To Bischoff’s credit, you can see where he understands that Jennifer is a boring character, and thus has come up with a good way to write her out of the series: have her fall in love with someone other than old sweetheart Jack Bender. Luckily, he has created a much more interesting female character in Jill Morningstar, who is every post-nuke male’s dream – and, in yet another of the novel’s many overtly comedic touches, declares herself as such.

Things ramp up as Hairy Kahn informs Foxtrot Bennington-Spleen that he’ll have to finish Blade Babes Of Babylon much earlier than expected. Poor Jennifer doesn’t realize that her hectic last day of filming will be her last day on earth. It all culminates in a huge massacre, the mutants killing one another in a fight for the cameras, and then a mutant Hitler is about to gut Jennifer on camera – that is, after he’s sung “Springtime for Hitler.” Then Waug swoops in on a jungle vine, wooping like Johnny Weismuller as he comes to Jennifer’s rescue.

So yeah, it’s all just really dumb. But it sure is gory, with heads juicily exploding, guts pouring out, and so forth. By the time Jack, Turkel, Jill, and geek Phil Potts arrive, all the mutants on the set are dead, and the four heroes now must hurry to the secret vat in which the gene-splicing experiments take place, Jennifer having been rushed there by Hairy Kahn. But it’s Waugh to the rescue again, fencing with Foxtrot and again saving Jennifer. In fact, the humans don’t do all that much.

Rebel Attack ends with Jennifer and Waugh now a couple, and the two planning to leave for New York, where Waugh has just gotten a job at “Evian Books,” which “even has its own cosmetics line.” (Note who publishes Mutants Amok…!) Bidding goodbye to his former sweetheart, Jack Bender resigns himself to a life of mutant killing and “raw sex” with Jill Morningstar…and meanwhile, none of the elements introduced in the previous two volumes are much explored in this one, so here’s hoping the next volume gets things back in focus.
Posted by Joe Kenney at 6:30 AM

Wow. Just wow. The author obviously had a lot of fun writing this book (and perhaps too much fun with various substances while sitting in front of his typewriter). I might have to pick these up just for the experience.