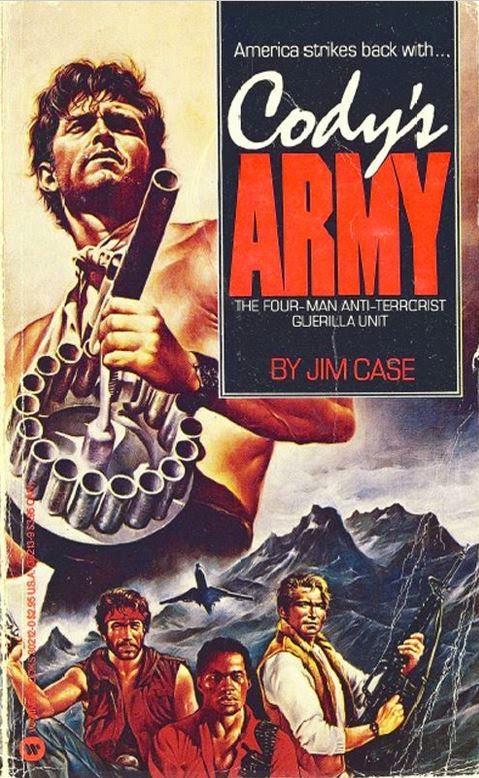 In the ‘80s Stephen Mertz oversaw two series, but MIA Hunter got all of the attention. However at the same time he also did Cody’s Army, which ran for seven volumes and, like that more popular series, saw a collaboration of various writers working under a house name, with Mertz outlining and editing (and occasionally writing volumes himself).

Like most other first volumes from the ‘80s, Cody’s Army #1 is focused on setting up the characters and storyline, and thus is longer than the average men’s adventure novel, coming in at 232 pages of smallish print. Also like MIA Hunter, there’s hardly any info on who wrote which volumes, so then a big thanks to Stephen Mertz himself, who told me that, for this first volume:

I wrote the opening chapters introducing Cody in action and him putting the team together. Sidebar: I asked my writer pal Joe Lansdale to please draft me one chapter where a Southern member of the team is busted out of jail. I wanted it racy but from a southern writer's viewpoint so as not to demean, much less alienate, southern readers. So Lansdale delivers a scene with a small town halfwit named Scooter who totes around a skateboard with a dead racoon nailed to it. Sigh. Joe never could write to spec, which probably accounts for his well-deserved success. Chet Cunningham picks up the narrative with the airplane hi-jacking, completing the novel based on my outline.

Interestingly enough, one can barely tell the author switch-up; the whole novel reads like the work of one writer. This is the same for the MIA Hunter books, which also seem to have the same style, even though almost every one of them is written by a different author. My assumption is this is Mertz’s behind-the-scenes editing, making it all come off with the same tone and style. But at any rate, there is little in this novel that reminds the reader of Cunningham’s earlier work; ie, none of the batshit craziness of, say, Hijacking Manhattan.

Anyway, Mertz opens the tale, and it’s all very ‘80s, as hero John Cody, a CIA agent who was in Force Recon in the Marines in ‘Nam, is down in Nicaragua, fighting the Sandanistas. Working with the Contras, Cody’s mission is to rescue a group of nuns who have been kidnapped. What starts off as a fairly routine action scene sees an unexpected twist, as Cody frees the nuns – only for them to be coldly murdered by the Contras he’s working with!

Learning much too late that this was not a rescue mission – the nuns were supposed to die, so that it would look to the media like the Sandanistas butchered them – Cody exacts vengeance on the Contras and his CIA contact, a sadist named Gorman. We then pick up 14 months later, and it’s all very Commando-esque, at least so far as the beginning of that Schwarzengger film went, with Cody living the life of a recluse in a mountain cabin in the wilds of Canada.

Cody has quit the Agency life in disgust, the memory of the nuns still haunting him. However he is of course tracked down, a trio of men showing up one day on his property. They’re lead by Pete Lund, a CIA man Cody has dealt with in the past. Lund offers Cody the opportunity to lead a new, off-the-book team that will be answerable to the President only; there will be no incidents like the fiasco in Nicaragua. Plus, Cody will be able to pick his own men. The operating principle of the outfit will be that it can do things Delta Force and etc cannot, as the outfit will technically not exist, and thus can work in the shadows.

After a page or two of deliberation, Cody agrees. Now he has to put his team together. First up there’s Richard Caine, who is basically Terrance Loughlin of the MIA Hunter series – a stoic Brit who was formerly in the SAS and is an expert in demolitions. I mean, Richard Caine is so similar to Loughlin – even coming off as a vague shadow of Cody, just as Loughlin does to Mark Stone – that I started to figure that maybe the dude is Terrance Loughlin, like maybe polygamist style Loughlin serves in two seprate action groups, and for Stone et al he’s known as Loughlin, but Cody and gang know him as Caine.

Next there’s Hawkeye Hawkins, a southern hellraiser who is similar to Hog Wiley of the MIA Hunter series, but not as bearish or oafish. To tell the truth, Hawkeye doesn’t do much to capture the reader’s attention, though he does blow off a few heads with his .44 Magnum, which is always a memorable thing. Anyway, Hawkeye and Caine are down in East Texas working as bounty hunters, so they’re easy for Cody to wrangle.

The fourth and final member of the team is another story. This is Rufe Murphy, who also comes off a clone of Hog Wiley, only he’s black. However he’s more like Hog than Hawkeye is, as Rufe is the roughian of the group, plus a pilot to boot. Rufe is currently in jail in some small town in Mississippi, having gotten there due to his banging the white mayor’s wife. Cody and team will need to break him out.

This breakout turns out to be the most memorable scene in the novel. Coming off like a redneck version of Mission: Impossible, it sees Cody and gang posing as cops from a neighboring town, who have come over to measure the size of the prisoner’s dicks! Rufe is of course massively endowed – the cops having gotten a good gander of him in the showers – and thus he’s trundled out as a sure-fire winner for this (fictional) contest Cody claims to be running. It all culminates in incriminating photos taken which make it appear that the police chief is giving ol’ Rufe a blowjob, and he’s of course let go in exchange for the negatives never being shown.

Gradually we get around to the storyline of this first volume; namely, that an American airplane, en route to Tel Aviv from Athens, is hijacked by a group of Palestinian terrorists. They’re soon taken to a deslote patch of Lebanon, just outside of West Beirut, where the captors demand various things or, in 48 hours, will start killing the passengers. It’s all very similar to the plot of The Hard Corps #2, which especially gets confusing when you realize that this novel also has a dour and taciturn character named Caine.

The hijacking stuff goes down just past page 80, which would mean, per Stephen’s comments above, that this is where Chet Cunningham takes over the writing duties. But as mentioned, the reader can hardly tell. The only problem is, it’s all so familiar; after some harrowing stuff, the prisoners are taken to a fortress outside of Lebanon, where the terrorists, lead by Farouk Hassan and Abdel Khaled, first murder the pilot, and then threaten to off the rest if their demands aren’t met.

Cody and team head to Beirut, where we’re at first lead to believe that a character named Kelly McConnell, a famous TV reporter, will become important to the story. Kelly provides a lead for Cody behind the Green Line of Beirut, ie the war-torn, Shiite-controlled area…and then she is promptly killed off. This is a typical “pull the rug out” Cunningham trick, and one he’s done successfully in the Penetrator books.

Cunningham does a good job of bringing to life the hellzone that is this quarter of Beirut, with innocents getting killed in the melee; there’s a bizarre subplot about some woman named Ona whose husband is killed in a blast, and she’s taken into sexual captivity by Majed Kaddoumi, a Palestinian leader who lives in a fortress, and who is the lead Kelly McConnel provided Cody. This takes us into our first major action sequence, as “Cody’s Army” stages an assault on Majed’s fortress.

Neither Mertz nor Cunningham much play up on the gore, but the latter does a little more so, with descriptions of heads exploding and guts pouring out. Hawkeye in particular has a knack for shooting people in the head with his .44 Magnum, which always results in showers of skull shards and brain matter. Just as in the MIA Hunter books, Cody is really the star of the show, though, to the point where the supporting characters sort of blur together.

Cunningham finishes the novel with back-to-back action sequences. First there’s the assault on Majed’s place. Immediately thereafter Cody’s Army (after dropping off the captured woman, Ona) attacks the remote fortress outside Beirut in which the captives are being held. Meanwhile, in a prefigure of the subplot Cunningham would write in Stone: MIA Hunter, the captives themselves are revolting, lead by a plucky stewardess named Sharon Adamson.

This action-packed finale has memorable moments like Rufe Anderson weilding dual Uzis; a total ‘80s action cliché if there ever was one. We can just go ahead and assume he’s wearing a headband. Cunningham opens it up a little with helicopters brought into the mix, including a climax in which Cody, piloting a chopper, chases after the fleeing Farouk Hassan. This part features a total Rambo ripoff, where Cody, crash-landing his chopper, plays dead, and when the other chopper comes in for a closer to look at him, he jumps up and sprays them with his Uzi!

It also looks like Gorman, the CIA sadist who was behind the nun massacre in the beginning of the novel, is to become the series’s recurring villain, much like Alan Coleman in the MIA Hunter books. Humorously enough, despite Pete Lund telling Cody that this new outfit won’t have any problems, Cody arrives in Beirut only to discover that his CIA contact is…none other than Gorman, the man Cody tried to kill in vengeance back in Nicaragua!

However, nothing at all comes of this, and Gorman and Cody don’t even meet; Cunningham writes only one or two scenes with him, cooling his heels outside of Beirut. There is no confrontation between he and Cody, all of which makes me suspect this Gorman stuff is there mostly to set us up to understand that the dude’s still around and still harbors a lot of animosity toward Cody (and vice versa), with the potential that it’ll all eventually blow up.

This first volume, while entertaning for the most part and well written, ultimately comes off as a little too standard. In his interview here on the blog, Stephen Mertz said about Cody’s Army: “Those boys kicked it for several books but they never did catch on like MIA Hunter.” I can sort of see why that is, at least given this first volume, as there’s no unusual hook or memorable quirk, as there was in the other series.

Future installments look to open things up, though; Mertz wrote the next two volumes himself, and the sixth installment, Hellfire In Haiti, sounds especially promising, with a plot about voodoo.
Posted by Joe Kenney at 6:30 AM

Great review! This reminds me of another four-man commando series that I don't think you've looked at yet (please tell me if you have) called Deadly Force. "Mark Dixon" was credited as the writer. I read most of them but could never tell if they were supposed to be serious or a parody, because I spent a lot of time laughing as I read them. A set of the books just sold on eBay.

Heh. I like how the one guy on the cover is just Chuck Norris without even any attempt to disguise him--even the same color headband!

Thanks for the comments, guys. Brian, I've been meaning to read The Deadly Force for a while, but haven't yet. Your comments definitely have me intending to read it!

Maybe if they'd left in Scooter and his dead 'coon, the series would've caught on better.