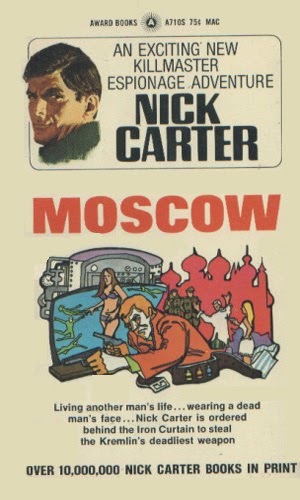 Nick Carter returns in this 1970 installment of the Killmaster series, which sees the first-person narration in full effect. Author George Snyder, who at the same time was pennng the Operation Hang Ten series for book “prodcuer” Lyle Kenyon Engel, turns in a novel that, due to the first-person perspective, comes off as a hardboiled sort of spy tale…one that’s only salvaged by a sci-fi twist in the very end.

I’ve said too many times that I don’t like first-person narrative for men’s adventure, and Moscow really sums up why – it takes forever for anything to happen. Given that the narration is directly from Carter, the outrageous aspects of the plot are thus played down, and we are so in Carter’s head that more time is spent on scene-setting, description, and opinions on various things.

But then, that could just be Snyder. The feel of this Nick Carter is very similar to the volume of the Operation Hang Ten series I’ve read, though luckily Carter isn’t as much of a misogynist dick as Bill Cartwright. However we get the same snap-judgments throughout, as well as random musings on women (“You could tell a lot about a woman from her hair,” etc). But all this stuff builds up to the point where it overclouds too much of the narrative – which is really sad, when you disover (much too late) that this novel’s threat is Russian “mermen!”

Anyway, Nick Carter is on vacation in Vegas, getting laid. As in the Operation Hang Ten book I’ve read, Snyder plays it vague with the sex scenes. In fact he doesn’t really exploit the female characters, more so writing about their grace and charm, rarely dwelling on their physical attributes. And yet for all that, it still comes off as more misogynist than those authors who do go on about “magnificent, full breasts” and whatnot; there’s just this indefinable, pervy vibe you get, same as in Synder’s other series. Like when Carter thinks an AXE coworker is cute, and actually sneaks into her purse to get the address off of her license!

Carter is called away from his eager Vegas bedmate by a call from his boss, David Hawk. In AXE headquarters in DC “Agent N3” is informed that his current assignment is to go to Moscow, posing as a top Soviet assassin AXE has recently killed, and smuggle out an undercover agent named Irinia Moskovitch. Also, he’s to look into the hintings of a secret weapon that is being devised at the Soviet Institute for Marine Research.

His features changed via makeup to resemble those of Vasilly Popoff, the murdered assassin, Carter is further trained via post-hypnotic suggestion to know everything there is to know about Popoff. Then he’s sent to Special Effects and Editing, where he’s given a host of gadgets that prefigure the material from the later Lyle Kenyon Engel-produced series, John Eagle Expeditor: a money belt filled with explosive vials, and a plastic gun that shoots darts. Given the necessity of his cover story, Carter will not be able to bring along his usual weapons, ie no Luger, stiletto, or gas bomb that he tapes to his scrotum!

Speaking of the Expeditor series, Moscow reminds me a lot of the eleventh installment, Poppies Of Death. It’s almost the same novel here, only in first person, trading more on Cold War espionage and suspense as Carter, pretending to be someone else, sneaks behind the Iron Curtain. Here though we do get a bit more action, like when Carter is attacked on the small vessel that’s taking him into Moscow – and his attacker turns out to be the real Vasilly Popoff.

Even after a brutal fistfight, in which Popoff is thrown overboard into the icy waves of the ocean, Carter still isn’t sure the man is truly dead. This adds a bit of suspense to the tale. That Carter likely doesn’t sound like Popoff is something Snyder glosses over, but still he is met with suspicion by power-hungry Mikhail Barsnichek, who is head of security at the Marine Institute. There’s also Sergi Kraznoff, who runs the place, an insane scientist who is obsessed with famous ballet dancer Irina Moskovitch – ie, the undercover AXE agent Carter must rescue.

Like author Paul Eiden in that volume of John Eagle Expeditor, Snyder attempts to bring to life the snow-swept streets of Moscow, as Carter is chauffered around. He outranks both men, and thus is treated to the luxury benefits of the Soviet elite. There follows a sequence at the ballet where Carter gets his first glimpse of the beautiful Irina – again, Snyder doesn’t much play up her body or beauty, but of course she and Carter share an instant spark when they later meet face-to-face. Another thing Snyder glosses over is that Carter doesn’t even look like himself throughout this whole section, posing as a man with a permanent facial scar, yet women still find him irresistable.

Speaking of which, Carter manages to score soon enough (I’ve noticed the dude bangs three women per volume, give or take); he heads back to his hotel room, only to find a naked and ready woman waiting in his bed. This is Sonja, girlfriend of Vasilly Popoff. After a vague-ish sex scene, Sonja quickly realizes this man is not the real Popoff (a funny scene because it’s intended to be read that the giveway is that Carter’s member is bigger than Popoff’s – but you could easily read it the other way around). After she gets her sexual satisfaction, she pulls a gun on Carter. It’s all been a setup, the real Popoff waiting outside; Sonja just got caught up in the moment and decided to take Carter for a test run!

There’s another fistfight where Carter, who goes along with the two apparently just for the hell of it, ends up losing the papers that were part of his cover, Popoff getting them back and making off with them. And also, poor Sonja gets used as a human body shield. Now Carter is up shit creek. He will be outed soon enough, and likely killed. So what does he do? He rushes to Irina’s apartment, having told her during their brief meeting earlier that he’s the agent sent here to get her out…and proceeds to have sex with her! I mean, what would you do if your entire mission had just been compromised?

Barsnichek and Kraznoff storm in, disrupting them in mid-coitus (how embarrassing!), and haul them off. Kraznoff is at the frothing point, driven fully insane. Carter, using those explosive vials, manages to free them, but the Soviets already know he’s heading for the Marine Institute. Once Carter’s finally gotten in, we see how nuts Kraznoff is. The “secret weapon” he has devised here are mermen, ie “husky men” who have been surgically modified to breathe underwater. They have “permanently puffed out cheeks and lips,” bloodshot eyes, and gills on the sides of their necks. They’ve also been rendered mute by the surgery, and now squeak like aquatic animals; Snyder delivers several eerie scenes where they sit in their massive water tanks, squeaking and circling around like human sharks.

The climax goes on for quite a while, but unfortunately comes off as underwhelming, mostly due to how Snyder writes. Simply put, the dude takes forever to make anything happen. For example, Carter steals a truck at one point and barrels it through the Marine Institute gates, losing control on the snowy streets. He sees he’s about to crash into something…and like three pages later he does. It’s like that throughout. There’s just too much buildup, even in the action scenes, and the momentum is constantly stalled. And likely it’s due to the first-person narration, as we’re stuck inside Carter’s head.

There’s also a lot of repetition throughout, which also stalls momentum. Like when Carter uses one of his glass vials to start a fire outside the Institute, and we’re informed at least three times that many of the soldiers are busy trying to put it out. But anyway, this finale is at least fun, with Kraznoff holding a nude Irina overtop the vat of mermen, threatening to throw her in, even making her do a sexy dance for them – as he reminds her, despite their deformed appearance, they are still men, and still have certain needs.

We finally move past the hand-to-hand stuff as Carter remembers he has a dart gun. At any rate he and Irina still manage to fall into the massive water vat, where you’d think they’d be easy pickings for the mermen. But wow, talk about anticlimactic…these “secret weapons” are a total joke. All Carter has to do is punch them in the gills and they instantly die! I mean for one, you’d think that Carter’s strikes wouldn’t even have much force behind them, given that they’re fighting underwater, but still, wouldn’t you think these guys would totally outmatch Carter in their natural environment?

But then, it is pretty cool to realize that the finale features our hero taking on men with gills in their throats and webs between their fingers. And despite being a wanted man, with half the Soviet regime converging on the burning Institute (many of the soldiers are busy putting out the fire, by the way), Carter of course manages to escape with Irina, getting her back to the States – where he later informs an impressed Hawk that the two are going camping for three weeks!

Lyle Kenyon Engel claimed that he came up with the plots, wrote the outlines, and in many cases wrote the actual books for all the volumes of Nick Carter: Killmaster that he “produced.” Beyond being an impressive claim, given that Engel oversaw the series from its creation in 1964 until 1973, it’s interesting to wonder if these claims held true for Moscow. If so, Engel must’ve felt the “merman” idea needed further exploration – hence the later Engel-produced series, Attar The Merman.

I haven't read this novel, but from your description the merman angle just seems to be tacked on.

A better use of it might have been about say Soviet mermen sabotaging the navy or something.