To Kill A Snowman 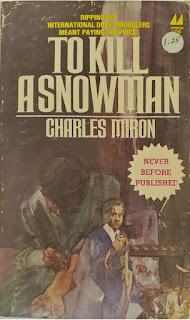 To Kill A Snowman, by Charles Miron
No month stated, 1978  Manor Books

It looks like after Airport Cop failed to get off the ground (clever pun alert) Charles Miron went on to publish several standalone crime novels for Manor Books…crime novels with some of the most psychedelic narrative you’ll encounter anywhere. Seriously folks, halfway through To Kill A Snowman it occurred to me that I had no idea what the hell was going on.

First of all, the cover art implies that this novel has something to do with heroin, but in fact it’s about coke smuggling, as evidenced by the title. I was hoping for a Cocaine-inspired sleazy ‘70s crimefest set on the mean streets of New York, but To Kill A Snowman actually takes place in…Sweden. This is just our first example of how skewed Mr. Miron is…not to mention that the plot, such as it is, is sort of ripped off from a subplot in his earlier Death Flight: a struggling filmmaker uses a coke deal to finance a movie. I mean, that’s what the plot’s supposed to be about. What actually happens in the book is a different matter.

For one, I don’t think Miron ever even informs us where in Sweden the novel opens; initially I thought it was taking place in Copenhagen, which of course is in a different country. Finally though “Sweden” emerges as the locale, and it would appear Miron must’ve visited the place, as he peppers the narrative with egregious references to Swedish words, places, and cuisine. Our hero is Jeff, a young American fillmmaker who has come here to Sweden because…honestly I don’t know why the hell he’s here. Apparently there’s like a screening of an unfinished documentary he made, or something like that…really, just like with the Airport Cop books, I spent the entirety of the novel feeling a sort of contact high, so a lot of the “plot” escaped me.

The novel opens with Jeff attempting to rip off some coke dealers, working with Lena, his Swedish girlfriend. If I understood it correctly, and I’m not sure I did, the plan is for Jeff and Lena to act as couriers for other buyers, but they intend to take the coke for themselves and sell it. I think. But Lena, after picking up the cocaine, doesn’t show at their prearranged meeting place, and Jeff starts to suspect he’s been had. Spoiler note for anyone who attempts to read this damnable book: Lena won’t return. I mean you’d think it would be a given that Jeff would have a reunion with her, at least for revenge, but nope – that’s not how Charles Miron rolls. I mean folks you can’t expect basic storytelling elements when your author turns out prose like this:

Wet film flooded over [Ulla’s] perfect marble-shaped eyes. “Puries” Jeff called them when he knelt as a kid outside round circles in the dirt where potfulls of gaily speckled globollas lay waiting to be knocked out from a three-finger heist.

What does that even mean?? Or how about:

Who understands the phalarope, his dreams or flights of fancy? Now [Jeff] drove masochistically through the nutcracker drill, football’s two-on-one suicide formation propelling a lone ballcarrier between a pair of Neanderthal shoulders with no necks, only blind desire to bust head, claw inside his birdcage face mask, using callous stumps for hammers, gouging his eyes before the body fell limply forward.

“Girl, open your eyes, the ones you closed everytime we made love. Touch me, a bit of a user, selfish, but Christ, not the shadow of anyone’s mind blowing incomplete man.”

Ulla watched as Jeff nervously picked loose skin from the corner of his cuticle. She tried remembering intimate details [her old boyfriend] Jurgen had left outside his window for her. Back of the hand over his left eyelid, as if the sun always shone too brightly for him.

Mind you, that’s exactly how those three paragraphs appear in the book – I mean that’s in sequence. And it’s like this through the book. Soon enough it devolves into a near-psychotic blur of senseless narrative. And speaking of psychotic, the infrequent violence comes out of left field and hits hard: when rounded up by the men who financed the coke deal, Jeff fools them into thinking he’s hidden the stash somewhere, and as they’re driving him to get it he uses a surprise “karate elbow” to knock a dude’s eyeball out of its socket! Bloody cord dangling down the guy’s cheek and everything. And previously Jeff’s been portrayed as a harmless movie-fan…though he did get “commando training” from his high school gym teacher(?!).

The “Ulla” of the excerpts above is Lena’s 18 year-old roommate, who professes no knowledge of where Lena’s run off to, and this after Jeff’s slapped her around a bit. She asks to come along with him, as apparently she’s attracted to him, and during the escape they get around to having sex: “I’m going to spunk you like you are a jungle goddess” being the unforgettable words Jeff initiates the act with. Oh and I forgot, at this point the two are on a ship, escaping wherever the hell the novel opened, and Jeff’s just taken a big shit! Yep folks, you read that right…we have a scene where Jeff sneaks into the restroom while everyone onboard is sleeping and tries to hide the sound of his, uh, “evacuations” with the flushes of the toilet. This takes place directly before the sex.

One would think Jeff would be a nervous man, with Swedish and American mobsters and the cops looking for him, but again, Charles Miron doesn’t roll that way. Instead our hero blathers endlessly about classic film, or makes obscure references to film or literature, and instead of hiding out he goes to a little village and works on his film script. Then one day he ditches Ulla and tries to get a boat to Copenhagen. Instead he’s caught by more drug-world denizens, but these ones are more professional and just want Jeff to work for them and find the cocaine he lost.

Instead Jeff makes off with Elizabet, sexy babe of this drug kingpin, and is right back to watching movies and talking about movies instead of worrying about his life. In fact the “climax” occurs at a screening of Jeff’s unfinished film, where the cops, thugs, and Mafioso who have been trailing him all congregate. Hopefully at this point no reader is expecting an action-packed finale, or even a sensible one. Jeff throws a “brick” of cocaine that turns out to be candy, and the thugs squabble for it, and the cops take custody of Jeff and lead him out, passing by the audience that wants to ask Jeff about his movie.

Honestly To Kill A Snowman was a hot mess, and I have to say I’m not sad that I don’t have any of Miron’s other Manor standalones.
Posted by Joe Kenney at 6:30 AM

Puries, globollas etc. are all references to the game of marbles. Puries are opaque marbles of a single solid color. Globollas are large marbles. The three fingered heist is a reference to successfully executing a shot, probably a Three-Finger Flat. The circle in the dirt is the playing field. Pretty obscure references to casually throw out like that. The cross-section of marble players and crime novel readers can’t be that large.

Thanks for the comments, everyone -- and TF, thanks for explaining what the heck that paragraph was about!

There’s some overlap here with a terrible movie called Search and Destroy (1995), where a failed businessman decides to make a movie out of his favourite self-help novel and eventually (along with the self-help guru’s assistant who falls in love with him) takes an assignment as a drug courier, though he manages to screw that up, too, and has to run for his life. It seems the movie was an adaptation of a stage play, which explains why everything is weirdly stagey and everyone stands around repeating every line four times like they’re slowly figuring out the best reading for that line. Amazingly, it won film festival awards.