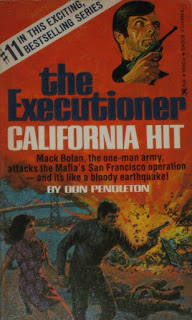 Picking up shortly after the previous volume, this installment of The Executioner has Mack Bolan in San Francisco, and what I found most impressive about California Hit is how effortless Don Pendleton makes it all seem. I was halfway finished the book and it felt like I’d just started reading it.

And yet, that edgy feel of the early volumes has been lost; one could almost argue that Pendleton is on autopilot at this point. I don’t mean that as a criticism; he’s just so perfected his template that you know exactly what you’re going to get: an opening action scene, a couple arbitrary parts where one-off characters recap everything that’s happened, some Mafia parts where various goombahs argue with one another, perhaps a sexy babe or two, and a final action scene. But Pendleton does it all so well that it comes off as fresh…but then we’re only on the 11th volume. If we’re still reading the same thing in the 30th volume it will be a different story.

Bolan’s already in San Francisco when we meet him, and the cover illustration comes into play immediately. Bolan tosses a satchel charge into a mob bar with an Asian theme and a “real live Chinal doll” runs onto the scene moments before the explosion. Bolan saves her, but this compromises his “numbers;” now his plan has been thrown awry and he’s in danger of being cornered by the mobsters and/or the cops who are quickly gathering on the scene. However I’m sure no reader anywhere was concered about this; as ever Bolan manages to escape both parties.

The “China Doll” is named Mary Ching, but she isn’t nearly as important to the series as a new item in Bolan’s arsenal: the .44 Auto Mag. This stainless steel automatic magnum is dwelt on for a few pages of proto gun-porn, receiving more coverage than any previous Bolan weapon, even down to the load mixture for the cartridges. What I found most humorous though is we are told this gun is new on the market, yet we’re not told how Bolan acquired it – previously we’ve been informed how he came across all his other weapons. Perhaps he took it from some thug he killed between volumes.

Anyway, Bolan’s come to mess up the San Francisco mob, and also he’s heard of a msyterious “Mr. King” who is behind the scenes and also needs a good killing. This recalls the previous volume, in which Bolan targeted the peons before going after the big bad guy in what came off as an arbitrary finale. However, there’s less action here. Pendleton spends more time with those one-off characters, either cops or Mafioso, fighting with each other or trying to figure out how they can finally bring down “that bastard Bolan.”

Bolan does however find the time to get lucky with Mary Ching, later in the book, but the scene is totally off-page. Bolan is more concerned about whether he should trust her. First she comes back to her place with a few Mafia gunners tailing her, and after taking them out Bolan seems to be sure Mary was unaware they were following her. Then after taking her back to his “drop house,” Mary takes off again without any notice, and thus Bolan feels that his secure base has been compromised. He can’t get a handle on which side she’s on; Pendleton initially seems to be working in a Chinese tongs subplot, but apparently changes his mind and drops it before novel’s end. There’s also some red herring stuff about Red Chinese commie cells operating out of the Bay area, but that too doesn’t amount to much.

As mentioned action is more sporadic. Bolan hits the bar in the opening, then gets in a few quick firefights here and there. The action highlight for me is his blitz on a mob location in which he first hits it with smoke bombs and then storms inside, wearing a gas mask and his customary blacksuit, and blows away goons with his new Auto Mag. Here though we have a return of another element of the template: a cop who is supportive of Bolan’s one-man war on the mob. Pendleton throws in a new twist this time in that the cop, Bill Phillips, was on Bolan’s team in ‘Nam.

Pendleton works in references to previous books, in particular #2: Death Squad; Phillips has kept up with Politician and Gadgets, telling Bolan they’re doing well living lives of anonymity now. Of course these two would later feature in Able Team, but as for Bill Phillips I don’t know if he returned to the franchise; the last time the two face one another Phillips tells Bolan that it will be his duty to arrest him if Bolan ever steps foot in San Francisco again.

The Mr. King subplot is almost surreal in how vague it is. As with the last volume, Pendleton tries to remind us periodically that there’s a big man behind the scenes, one shrouded in mystery. Bolan finds out who it is in the final pages, after having set up the mobsters and orchestrating them into an ambush. Mr. King shows up in a car, and when Bolan spies him from afar he’s blown away by his identity. All we find out is that Mr. King is black, and his name “isn’t really King;” it seems evident that we’re to understand Mr. King is a Martin Luther King type of civil rights figurehead who in reality has “sold out his own people,” per a disgusted Bolan, who of course kills him.

At any rate Pendleton is more concerned with setting up the events of the next volume, which I believe per his interview in A Study Of Action-Adventure Fiction he claimed as one of his favorites in the series. Bolan gets in phone contact with Leo Turrin, the undercover cop back in Pittsfield, Bolan’s hometown and the location of the first volume. Turrin seems preoccupied about something and at novel’s end (as usual, the book occurs over just a few days) he informs Bolan that Bolan’s kid sister Johnny and Bolan’s old flame Val have gone missing. At the end of the book the Executioner hops in the “Warwagon” and heads back east to find them.

Pendleton’s writing is as skilled and assured as ever, but he seems to have forgotten that Bolan is only thirty years old. Several times in the book Pendleton mentions that Bolan’s not only a ‘Nam vet but he’s also a veteran of the Korean war! First this appears in a “Uniform Crime Network” bulletin which opens the book; it’s stated that Bolan fought in Korea, and I was willing to accept this as just a gaffe on the part of the authorities. But then in the novel Bolan himself is remembering this or that incident in Korea, so Pendleton must’ve forgotten for this installment that his protagonist would’ve been way too young to fight in that particular war.
Posted by Joe Kenney at 6:30 AM

I'm not sure how many Mack Bolan short stories Pendleton wrote, but I just happened to read his first last night in the 1978 anthology THE GREAT AMERICAN DETECTIVES. It's a typical Bolan tale, but the pacing just seemed way off. A typical Pendleton action sequence that might last, say, 18 pages is dealt with in just a couple in "Willing to Kill." I liked the story fine, but Bolan seems more appropriate to long-form fiction.

Willing to Kill was Don's only short story. It's available as an ebook. I've yet to read it. It was described to me once as Bolan philosophizing for a few pages before whacking some guys. If that's the case, I don't need to read it.

I don't think that's accurate. It's basically a typical Pendleton novel compressed to 20 pages or so. The War Wagon is in it, as are Turrin (by phone) and Brognola. All the violence is saved for the end and is not plentiful.

Thanks for the comments, guys! Marty I've got that anthology too, but I've been waiting to read the story...if I remember right, it takes place after the 18th volume, Texas Storm. I might not be right on that, though. I seem to recall it's mentioned that Bolan is leaving Texas when the story begins, thus implying it takes place around that time (also given the publication date).

Yeah, it starts at the airport, where Bolan spots a Mafia hit team and decides to tail them.

Pendleton wrote the story specifically for this book, its only original story.

Also, this is one of the firs, I believe, where Bolan's basic strategy in the end is just to lure all the mafiosi somewhere remote and then blow them up with a bazooka or something. It happens a few times later. You'd think they'd quit falling for that.

Bolan hit the Mafia leaders with a bazooka and a mortar in the very first book, WAR AGAINST THE MAFIA. Although he didn't really "lure" them there ... they were just meeting with the top boss to decide what to do about Bolan.

I don’t have any memory of Bill Phillips appearing again, but a Google search shows I’m wrong; he appears in #10: Caribbean Kill.

Sometime in the last year I read #134: White Line War, in which Bolan infiltrates the Mafia during a Mafia/Colombian gang war, then (after aggravating the problem) suggests the two sides call a truce. And then blows them up at that meeting.

I keep forgetting that Bolan has grenades (including fragmentation grenades) which are great for when he’s badly outnumbered but the bad guys are all clustered in one room.