The Peacemaker #2: The Yashar Pursuit 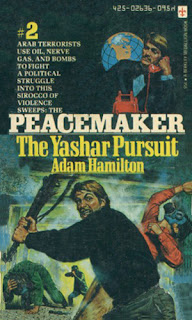 Ah, The Peacemaker. The “adventure” series that makes Dakota seem like a rip-roaring rollercoaster of thrills. I have to quote him again, but damned if Zwolf didn’t aptly sum up this series when he mocked the covers: “Look out, troublemakers, or Barry will make a few calls!” Because that’s all Barington “The Peacemaker” Hewes-Bradford does in the course of The Yashar Pursuit.

But first a note on that cover art, which is by far the best thing about this series. The back cover credits artist Mel Crair, and it would seem evident that the character depicted is his own interpretation. Indeed, Marilyn Granbeck (aka “Adam Hamilton”) briefly describes “Barry” as having “a hawk nose and black hair,” and later even has him joking about wearing a false moustache. Thus the moustached lothario of the cover is Crair’s invention – I mean hell the dude doesn’t even wear a bow tie in the books. But he sure as hell uses the phone a lot, so that part of the cover is at least faithful to what happens in the actual books.

There’s no pickup from the previous volume. The novel opens with what will turn out to be one of the few action scenes as a group of American terrorists break into an army base in the desert and steal a cylinder of nerve gas. Later we’ll learn that four other cylinders have been stolen from other bases across the country, but this information is being kept top secret from the public. We readers know it is a plot of Yashar, an Arabic terrorist from the fictional Middle Eastern country Kushka, in league with some hippie terrorists who call themselves the International Peace Movement.

Barry comes onto the scene because the husband of one of his most trusted employees is hurt in the opening cylinder heist. He makes here the first of the many, many phone calls that will comprise the brunt of what passes for “action” in The Yashar Pursuit, trying to get details on what exactly was stolen from that army base. He even flies to DC to get the scoop on what’s happened. For the most part he relies on two employees: Frank Trask, the pipe-smoking executive in charge of the security wing of Barry’s corporation, and Lobo, the former pro footballer who, same as last time, does most of the heavy lifting when it comes to researching leads, fighting bad guys, and doing all the other stuff that the main protagonist of an action series usually handles himself.

For that is the inherent problem with The Peacemaker. I mean it’s like reading an action series starring the President. Barry hardly ever rolls up his sleeves and gets in on the action – he just, you know, makes a few calls, and other people do the work for him. About the most he does for the first 160 pages is call people, smoke mountains of cigarettes, and occasionally take a flight on his private plane. But even then a savvy writer could come up with a way for Barry to actually go out and see some action, but part of the gist of the series is that Barry protects his “secret identity” at all costs – the world just thinks of him as a successful entreprenneur, not realizing he uses his vast wealth to “ensure peace.”

Well anyway Barry gradually comes across mentions of Yashar and deduces that he’s stolen the cannisters with the help of the hippie terrorists. Sad to say, the highlight of the book might be a part where Lobo is sent to check out an International Peace Movement sit-in in DC, where he hobknobs with a willowy redhead (who promptly disappears from the text, despite initially promising to be a more important character) and spies a package of grenades being unloaded alongside some food. But the cops raid the sit-in and steal the grenades, which turn out to be unarmed or something, and both Lobo and Barry suspect they were going to be filled with some of that stolen nerve gas.

There’s also a lot of nonsense about Freda Polk, the leader of the International Peace Movement. Granbeck wants her cake and to eat it, too, because Freda is both a grungy hippie terrorist and a sultry babe who is wooed by Barry’s manly charms. Whereas a real-life Freda would be a shrill harpie who hated men, Freda actually tries to communicate with Barry, resenting him for being “Establisment” but still offering to spend the night with him…an offer, folks, which Barry turns down. Like I said last time, it wouldn’t take a genius to deduce that “Adam Hamilton” is really a woman.

Nor does Barry conjugate with Elorith, attractive young sister of the current ruler of Kushka, a woman who knows the mysterious Yashar and might even be able to contact him. But Barry is constantly uncertain if he can trust Elorith, if she’s just setting him up for Yashar, and all that – again, Granbeck’s bibliography is heavy on mysteries and that’s pretty much all she writes here. But back to the sleaze, nothing happens with these or the few other women Barry meets in the course of the novel, though on the very last page it’s implied he and Elorith might get friendly on a trip to Kushka.

It just churns on and on, with hardly anything happening. Most interest is derived in how much more ruthless Muslim terrorists have become. The terrorists send letters to the media that the cylinders will be released in a big city if demands aren’t met – freeing Kushkan prisoners and the like – and Barry and others have trouble believing that these terrorists could kill people on a mass scale. When one of the cylinders accidentally leaks, killing nineteen innocents, Freda Polk goes out of her way to proclaim Yashar’s “innoncence,” that he had no intention of killing those people. Of course I’m comparing fiction to reality, but still, the book is from an era in which the idea of radical Muslim terrorists flying airplanes into skyscrapers would be outside the realm of rational thought. But that’s progress for you, I guess.

Last time there were at least some gestures toward excitement, or potential excitement, like Barry doing scuba reconnaissance and such, but this time there isn’t even that. Barry just smokes and flies around on his private plane, including a trip to Denver when it appears one of the cylinders is about to be released. The climax, such as it is, involves a long drive into Pennsylvannia, where Barry finds Yashar’s headquarters, deep in a mine. The cover art comes into play here, with Barry knocking out a few of the terrorists with an appropriated rifle – shooting none of them.

In fact the book is so determined to be bloodless that when Barry captures Yashar, he goes out of his way to keep him alive; this despite Elorith, who begs Barry to let her kill Yashar, given how evil he is. I mean even the female character wants to kill the bad guy, but our hero refuses! At length Barry is indeed forced to pull the trigger, but only after Yashar has conveniently escaped with a gun of his own, and thus Barry has to defend himself. This is Barry’s first and only kill, on page 189 of a 192 page book. The whole thing is just so tedious and lethargic. And the helluva it is, Granbeck’s writing is fine, she’s just working in the wrong genre.

Honestly folks, no fooling – this series sucks. It seems to have been written for a target audience of grandmothers. But I bet even grandmothers would find it boring.
Posted by Joe Kenney at 6:30 AM

Sounds like the Peacemaker should be the hero's boss, not the hero himself. There's a reason Ian Fleming wrote about James Bond and not M.

I never understand people writing these books and not wanting to put action into 'em. It's pretty easy. I mean, I've written these kinda things just for fun sometimes, and I like to get my characters into fights just so they can say some cool shit, if nothing else. And if they know they're writing for an action market, you'd think it'd be a given that they'd put in... y'know, ACTION.

Weird, books like these are just weird. I still haven't read past the first volume of the Peacemaker. Looks like I've got a slog ahead of me if I do... :)

I remember reading the first one, thinking it was cool concept, and found it boring. Never went on to any others.