Voyage Of Death (aka Kill Squad #2) 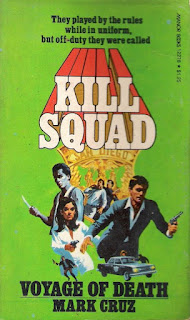 Dan Streib seems to have learned his lesson from Chopper Cop, the series from which he was apparently fired by book packager Lyle Kenyon Engel; the first volume of Kill Squad was much better than either of Streib’s Chopper Cop novels, featuring more biker action and exploitation than both of them put together. This second installment continues the trend, at least in that it’s sleazy ‘70s crime. However this time there’s an almost goofy disregard for reality or common sense.

Actually the goofiness is prevalent throughout, with almost the entirety of Voyage Of Death featuring the titular Kill Squad – blond Chet Tabor, black Grant Lincoln (we’re reminded many, many times that he’s black, of course), and sexy Maria Alvarez – on a luxury cruise ship bound for Mexico. Streib pulled the same trick in the lackluster third volume, taking his heroes out of their San Diego stomping grounds and putting them in an unusual locale. My suspicion is he was shoehorning them into various mystery novel ideas he had on the backburner. For example, the plot of this one could feature practically anyone as the protagonist; a trio of rule-breaking San Diego cops seems forced.

There’s no pickup from the previous book; we meet the trio as they’re aboard a ship in San Diego, working a stakeout on drug runners who’ve been smuggling heroin into the city from Mexico. Maria’s kid brother Pedro’s on board, a junior cop who has been working the case. There’s a quick firefight where Tabor inadvertently kills all the bad guys – Tabor is an almost bafoonish protagonist, more of which later – much to the dismay of their “stupid chief” boss, Chief Jackson.

We get our first taste of the ridiculous nature of the book when Tabor leaves the crime scene…and goes to a party in his apartment! And then Lincoln and Maria show up to yell at him! The yelling of course gets Tabor and Maria properly heated, so that they’re engaged in some sort-of explicit hardcore shenanigans on Tabor’s bed, a reminder that these two “have a casual sex thing going” (per Marty McKee). Then Lincoln barges in on them (not the last time “the big black” will barge in on Tabor while he’s getting busy) with a box that’s just arrived for Tabor.

You guessed it, folks…pre-Seven style it’s Pedro’s severed friggin’ head in the box. Well this of course ruins Maria’s randy mood good and quick. Things get even more ridiculous…Tabor and Lincoln march into Chief Jackson’s office and flat-out tell him they’re boarding the cruise ship they’ve determined is behind the heroin smuggling…if Jackson doesn’t “make some calls to Washington” and get them assigned they’ll just go as ordinary civilians. So Jackson relents, mostly because it will get these two out of his hair for a while, and thus these San Diego police officers are flown to Los Angeles so they can board a luxury ship bound for Mexico.

Oh and to make it even more ludicrous, a grieving but determined Maria comes in and says she’s going too, like it or not. But it gets goofier, folks…’cause Tabor, who as you’ll recall started all the action at the opening of the book which ultimately led to Pedro’s death, is basically like “Who gives a shit?” that the kid’s dead, and disregards it because there’s nothing he can do about it now. And so Tabor looks as the cruise as ample opportunity to check out some swinging ‘70s chicks and maybe take a couple of them back to his stateroom, which he shares with Lincoln; “the Negro cop” will just have to find his own place to spend the night.

To this end Tabor insists that he’s only going to check out the young female passengers on the ship; the evidence shows that life preservers have been missing from staterooms occupied by single male passengers, and thus it seems clear that the smugglers are stealing them and using them to float the heroin shipment before the ship comes into port, to be picked up later by boat. While Maria and Grant believe this means that single men are behind the heroin pipeline, Tabor is certain it’s an all-girl pipeline, sleeping with those single men and stealing their life preservers the next morning.

There are supposedly a few hundred passengers on board but Tabor keeps bumping into the same three women – a willowy librarian named Winifred, a standoffish blonde named Sabine, and a sexy brunette named Kirstin – and immediately deduces that one or all of them is involved with the heroin pipeline. Of course he’ll be proven correct, coincidence or plot cliches be damned. Meanwhile Grant Lincoln hooks up with Winifred’s Japanese roomate; Streib often includes Japanese babes in his novels, I’ve noticed, with Tabor scoring with one in the third volume.

But it’s just all so goofy…Tabor, despite his better judgement, ends up with Winifred, even though he’s sure she’s a virgin. He just feels sorry for her. Plus she drops enough hints that she’s on the cruise for reasons other than just pleasure, so Tabor’s suspicions are aroused. They have some fairly explicit sex, where it turns out Winifred is indeed a virgin. Late that night Tabor wakes up alone in bed, searches his room, and finds that his life preserver is indeed missing! He gets in a chase with a shadowy individual on the empty, dark deck – there are a lot of contrived “action scenes” where Tabor is haunted by someone he somehow can’t see on this massive, empty ship.

The next big action sequence has Tabor and Lincoln shadowing Winifred as she sneaks around Puerto Vallarta, immediately after the ship docks. She appears to do a drug deal while “chuting,” ie flying along in a parachute behind a boat. To make it even more ludicrous Tabor and Lincoln chute behind her, tailing her to a remote island, where they get in a shootout with some Mexican thugs…a shootout for which Tabor is arrested and thrown in jail. And then folks, a friggin’ helicopter descends on the prison that night, dropping a ladder for Tabor, and it’s piloted by Maria and Lincoln: they got the helicopter from the ship’s captain, who wanted to ensure his passenger could get back on board the ship!

Yes, that all really happens. There is I say an almost brazen disregard for reality in Voyage Of Death. Somehow Tabor’s unable to determine Winifred’s complicity in the smuggling, though it seems clear she’s gotten in over her head and is being used as an unwitting mule. It doesn’t matter, because shortly Winifred is dealt with, and again Tabor is unable to see the attacker even though this happens on an otherwise empty deck. After this his sights set on Sabine and Kirstin, though suprisingly Tabor doesn’t have sex with either of them, Winifred and Maria being his only conquests this time around.

The climax occurs at the next stop, Acapulco, and by this point Tabor’s certain the smuggling mastermind is either of those two women…but also one of them might be the private eye the Mexican government has put on the ship, keeping his or her identity a secret. There’s a nicely done shootout at a half-finished, abandoned hotel, which proves that our heroes don’t really live up to the badassery of their “Kill Squad” name, in that for the most part they run for cover, scream “Stop! Police!” and trade ineffectual return fire. One of the two ladies is killed here, but Streib lamely has it that no one’s certain whether Maria shot her or an unseen sniper did.

This leads to the climax, in which Tabor confronts the main villain…at dinner. He’s already arranged for a date with the lady, and here he accuses her of her villainy and whatnot…and she ends up falling to her death when a vengeance-filled Maria shows up, looking for blood. I was surprised that the female villain didn’t get shot in the face so her eyeballs popped out – believe it or not, a recurring image in Streib’s novels.

Streib doles out frequent action but it seems clear he mainly wants to write mysteries…most of the novel’s centered on the lame suspense of which of the three women is behind the pipeline. But it’s a mystery with a moronic protagonist; Tabor does little to gain the reader’s sympathy or even interest, stubbornly bulldozing his way through the narrative with little regard for others. He spends a lot of time fighting with Lincoln and Maria, too. But it’s all still miles better than Streib’s work on Chopper Cop.

For those taking notes, Tabor and Maria didn’t get friendly in the third volume – perhaps indication that Maria’s not forgiven Tabor for Pedro’s death. She blames him frequently in Voyage Of Death, and of course Tabor doesn’t give a damn. So we’ll see what happens in the fourth volume, though there isn’t much continuity in the series.
Posted by Joe Kenney at 6:30 AM