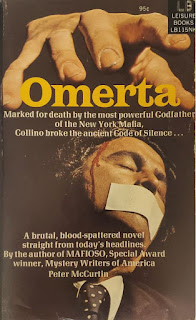 The last standalone Mafia novel Peter McCurtin published before turning his efforts to The Marksman and The Sharpshooter, Omerta is, per Lynn Munroe, pretty scarce today. This is too bad, as the novel, running a brisk 150-some pages, is a fast-moving slice of crime pulp, lacking the polish of some of McCurtin’s other standalone thrillers but not as grungy as his Marksman yarns.

Actually it’s pretty grungy at the start; McCurtin seems to be setting a goal for how often the word “fuck” can appear on a single page – it’s used in dialog and narrative and has the entusiastic ring of a fifteen year-old boy who’s just learned how to curse. Humorously though it disappears for a stretch before returning toward novel’s end. But man it’s all over the place at the start of the book, almost lending the novel a proto-Jerky Boys vibe. And truth be told, “hero” Lorenzo “Larry” Collino at times comes off like one of Johnny Brennan’s brash, foul-mouthed personas.

Collino is 42 and a third-generation mafioso; his grandfather started in the family as a torpedo for Don Francesco, now an old wheelchair-bound codger who lives in a fortress-mansion. Collino often relfects on his grandfather, who was a hot-tempered enforcer for the family; Collino the third is much like him, whereas Collino’s dad wasn’t as tough, and ended up getting killed years ago. Collino works the Manhattan area and, unlike the typical protagonist of this sort of tale, he’s a happily-married father of two prepubescent boys.

When we meet him Collino’s on a job for the Don; he’s spent the past several weeks in frustrating pursuit of a French coke dealer named Jacopetti, who is cutting in on the family’s territory. This engenders the F-bomb onslaught which initiates the novel; Collino’s royally pissed over this time-consuming task, as Jacopetti has holed up somewhere in Manhattan. But Collino’s gotten word on a restaurant Jacopetti frequents, and has staked the place out. He collars him, pretends to be a cop, takes him to some desolate location, and kills him – this after Jacopetti swears that the five million dollars worth of cocaine he brought over is already on the streets.

Here’s where Collino starts to get even more Jerky Boys-ish. He heads over to the bar he owns in Brooklyn and gets drunk. This was probably my favorite part of the book, as McCurtin populates the bar with some Bowery Bum types, including an old guy who works as a moritician but spends his nights getting wasted in Collino’s bar. The drunk mortician’s known for his biting tongue, and tonight Collino’s not in the mood for it; he beats the old man up after a few drinks, then later wonders what’s gotten into him.

This appears to be the theme of Omerta, that Collino is slowly losing control of himself. Despite often reflecting that he’s 42 and past all the “macho stuff,” he acts with savagery throughout the book, unable to control his temper. When Garafalo, the Don’s second in command and one of Collino’s enemies in the family, calls to ask about the hit, Collino basically tells him to go to hell. This sets off the incidents that will lead to the novel’s grim finale, all because a drunk Collino can’t watch his mouth. But then, we also learn late in the novel that things have been going on behind the scenes without Collino’s knowledge, so this throws the presumed “theme” out of whack: Collino’s in trouble whether he keeps his mouth open or closed.

Next day Collino’s called to the Don’s mansion, where the old man grills him on the hit. The cops have it that the five million bucks in coke are not on the street, so the old man is “just checking” to ensure Collino didn’t nab it from Jacopetti before killing him. Collino insists on his innocence but refuses to swear on the lives of his children, as Don Francesco requests. The Don, passing all this off as “just business,” tells Collino that the family will be checking on him over the next few days, etc. In other words, to spy on him to see if he does indeed have the coke.

Instead of going along with it, Collino instead bulldozes his way across the New York underworld, determined to find out what happened to that five million he’s been blamed for stealing. Meanwhile he pines occasionally for his wife and kids – and all three of them, by the way, stay off-page for the duration of the novel. The most we see of them is late in the game when Collino calls up his brother in law, another Italian immigrant and a Korean War vet who hates the commies, and tells him to come get his wife and kids and take them out of town for their safety. Collino watches from afar as the three are rounded up by his brother in law (who comes wielding a rifle) and driven off, content that they’ll be safe.

For it becomes clear as Omerta races for its conclusion that Collino himself is not safe. Mobsters tail him wherever he goes, and he doesn’t do much to stay on the Don’s good graces. He leads one of his tails into a gay bar, and when the dude follows Collino into the john Collino beats the shit out of him – and speaking of shit, he proceeds to jam the guy’s face into a backed-up toilet. As the novel continues Collino carries out more of these impromptu bursts of violent savagery, even randomly murdering a hapless clerk in some slummy hotel.

Otherwise on the action front there isn’t much in the way of shootouts or anything. In that gay bar Collino has stashed a .38 automatic – he’s stashed a few guns around the city – but he only uses it on two unarmed opponents. McCurtin goes for more of a mounting suspense vibe, with Collino feeling increasingly cornered as he shuttles around Manhattan. In the homestretch we realize we’re in for the mandatory downbeat ending of the ‘70s, as Collino learns it’s been a setup from the start. However I had a hard time understanding why exactly Collino even was set up.

Actually the finale is total ‘70s paranoia, and I’ll only go into spoilers here because the book is apparently scarce. For some baffling reason, Collino goes back to his home once his wife and kids have been taken safely away. He has some more drinks and eventually notices a car sitting in front of his house – no doubt some enforcers coming for him. Then the FBI calls, tells him they’ve just learned he’s about to be killed(!), and Collino agrees to turn state’s evidence in exchange for safety for his family and himself. But when the FBI guys show up and send off the enforcers, they take Collino to a remote location…where he’s to be shipped off to South America, to be tortured and killed by Jacopetti’s brother!

McCurtin handles the story with skill, keeping it fast-moving and tension-filled. My only issue was with Collino. One the one hand we’re told he’s happy, content, but on the other he acts like a nutjob, doing stuff even he himself doesn’t understand. In point of fact it just seems like the character is being yanked around by the demands of the plot. But in its short running time Omerta delivers a solid slice of Mafia pulp…though to be honest I kept waiting for Magellan to show up and start blowing these goons away.
Posted by Joe Kenney at 6:30 AM