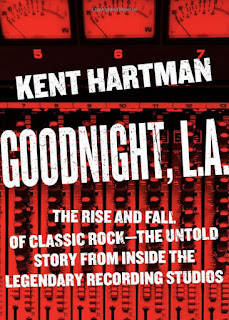 I stumbled upon a mention of this recent book and checked it out via InterLibrary Loan. I’m not familiar with Kent Hartman but it looks like he’s published a few books on rock history, in particular on the ‘60s studio musicians known as The Wrecking Crew. Goodnight, L.A. presents itself as a pseudo-sequel to that book, in that it takes place in the AOR adult contemporary mid-to-late 1970s (with a few unnecessary – or perhaps unwanted, at least for me – slips into the ‘80s and ‘90s), once again focusing on a few studio musicians.

The older I’ve gotten the more I’ve only listened to ‘70s music, be it rock or jazz, in particular the early ‘70s up through the pre-disco era. Actually sometimes I like disco, too, so long as it’s cosmic, baby! I’m not as much into the soft rock (aka “yacht rock”) thing, and luckily Hartman doesn’t veer too much into that territory, other than detailing how Kenny Loggins got his start; for the most part the book focuses on the album-oriented rock acts who defined the ‘70s, in particular Buckingham-Nicks era Fleetwood Mac, the Eagles, and Chicago.

Hartman opens the book with a recounting of how when he was sixteen in 1976 he and his pal briefly ran a record store. I thought this part was fun and interesting enough that it could’ve been elaborated on more. But Hartman just uses this to establish his credence as an authority on the subject, having been there and later meeting many of the musicians and songwriters whose music he’d grown up enjoying. Their stories form the basis of the book, he tells us, in particular the stories of a producer named Keith Olsen and a studio guitarist named Waddy Wachtel.

Of the two, Olsen takes up the brunt of the narrative, given that he had his hand in producing so many classic albums of the time. I was surprised to read how he got into the business: he was a member of the Music Machine, whose sole hit “Talk Talk” was probably the highlight of the Nuggets compilation, just a total blast of proto-punk. Wachtel on the other hand is a guitarist who ends up playing in the touring groups of several artists and providing guitar work for innumerable albums. Olsen though gets a lot more space, given that he discovers Lindsay Buckingham and Stevie Nicks, becomes their manager, produces their first album (and their first album with Fleetwood Mac), and goes on to produce many more classic albums.

One of the most curious things about Goodnight, L.A. is that it presents a relatively neutered ‘70s rock scene. Hartman makes only passing mentions of sex and drugs, and usually in a deragatory or at least condescending manner; for the former mostly in how Fleetwood Mac coke-binged throughout the recording of Rumours, and the latter only sporadic mentions of such and such a rock star having a weakness for his female fans – as if that were something to be ashamed of. But I guess in today’s #metoo world, it is. Who knows. All I’m saying is, the book lacks balls, which is funny given that it’s about the testosterone-laced world of classic rock. But then, Hartman writes the book in a chatty, “ready-for-Entertainment Weekly” sort of style, with the focus more on a mainstream readership.

Well anyway, Goodnight, L.A. comes off more like a scattershot sequence of VH1 Behind The Music clips, jumbled together with no real unifying thread. In an attempt to be broad-focused Hartman will jump from interesting stuff (say, Fleetwood Mac) to skimmable stuff (say, Helen Reddy). I also didn’t get much of a vibe of the times, of the culture that created these rock stars. Nor was there much of a peek into the creative process, other than the occasional focus on this or that hit song being recorded; for the most part Hartman delivers a shallow overview of the mid-to-late ‘70s rock scene, with a (sort of) focus on Los Angeles.

My main problem with Goodnight, L.A. is the whiplash the reader suffers from this abrupt plot-jumping. You’ll be reading about Fleetwood Mac recording their self-titled 1975 album, then there’ll be a two-line break and suddenly you’re reading something like, “One day in 1967 on the way back from a gig, Linda Ronstadt’s truck broke down,” and next thing you know you’re reading a long section about Linda Ronstadt(!?). It’s like that throughout the book. We’ll have like the “A plot” of the chapter, with arbitrary cutaways to the B, C, and sometimes even D plots. Most of the time none of the plots even meet. There’s no unifying thread to the book is what I’m saying, even though the intro makes you expect that Olsen and Wachtel will pull all the various threads together. As it turns out, Olsen does the heavy lifting in that regard, with Wachtel disappearing for vast stretches of the book.

Fleetwood Mac seems to take center stage initially, in particular how Buckingham and Nicks were spotted by Olsen when the duo were still part of go-nowhere group Fritz. Olsen invested heavily in the two, letting them crash in his place, putting his own money into the recording of their self-titled album, which as it turned out failed to become a hit. But, in what is now a legendary rock story, one day Mick Fleetwood happened to walk into Olsen’s studio, checking for a good place to record the next Mac album. Olsen played him “Frozen Love” from the Buckingham Nicks album, and Fleetwood eventually asked that the guitarist join Fleetwood Mac, Bob Welch having recently left the group. Olsen informed Fleetwood that Buckingham’s girlfriend Stevie Nicks would also have to join, as the two worked as a pair; Olsen also had to convince Buckingham and Nicks to take the opportunity.

This is all cool but honestly I would’ve preferred to read about the Bob Welch Fleetwood Mac, one of the most unsung groups in rock. I mean Heroes Are Hard To Find is my favorite Fleetwood Mac album of all. The whole Welch tenure was like cosmic soft rock or something, which is to say great stuff. But Welch only gets passing mention in the book. It’s all about the Buckingham-Nicks era…for a while. Because, in the first instance of what will sadly become a recurring theme in Goodnight, L.A., Fleetwood Mac abruptly vanishes from the text upon hitting it big time; we get the sad story of their dropping Olsen for a new producer, but after that it’s just passing, high-level mentions: recording Rumours while flying on coke, recording the maximalist Tusk.

For we jump around to other musicians, other bands – Linda Ronstadt, Warren Zevon, the Eagles, Chicago, Helen Reddy(!?), the Cowsills. For some inexplicable reason, famous L.A. acts like Crosby, Stills, and Nash (let alone Young) and Jefferson Starship aren’t mentioned. And for that matter, I get that Helen Reddy and Linda Ronstadt and later Pat Benatar are in the book because Hartman had to have some female musicians in it, I mean diversity is paramount today, so the book couldn’t just be about a bunch of male rock stars, right? But man, Helen Reddy?  Carole King??  Why couldn’t it have been about ‘70s-era Grace Slick? And hell, Stevie Nicks is mentioned a bit, but Christine McVie gets short shrift, so there was potential there as well.

Another big miss was not featuring much about Dennis Wilson, mostly remembered as the drummer for the Beach Boys but a gifted singer-songwriter in his own right. Hartman does mention him once or twice, but only in passing, and I say this is a miss only because I recently rediscovered Wilson’s solo album Pacific Ocean Blue, from 1977, and remembered that it’s THE GREATEST ALBUM OF ALL TIME. Unfortunately Hartman doesn’t mention it, and the references to Wilson have either to do with his drumming style or his popularity with female fans. Heck, Wilson even had a late ‘70s fling with Christine McVie, so there was opportunity to write about Wilson and another female rock star, but Hartman misses it.

More frustrating are the parts that seem promising but ultimately fizzle, like the mention midway through of Boston. Here we see how industry and fan perception has changed; we’re informed the various labels have passed on Boston given that it’s not an actual “band” per se; just a mega-talented dude in his basement named Tom Scholtz, who has played everything himself. In today’s day and age this would not only be acceptable but marketed as a sign of the artist’s talent, but Hartman informs us that record labels in the ‘70s feared potential customers would think a one-man band was some sort of freak. So we get another legendary rock story, with Scholtz recording the debut Boston album in his garage and the other band members going through the charade of recording in a professional studio, all to fool the label.

But after this…Boston disappears! We’re told Boston was the biggest selling debut album ever, but after that the group drops from the text, with only a passing mention much later on that their follow up LP didn’t do as well, after which they were caught in legal wrangles for a few years. Instead it’s about the group Chicago and its various issues, including the accidental suicide of guitarist Terry Kath, or the Eagles recording Hotel California and eventually falling apart due to jealous infighting. After this the book gets into real questionable territory, with features on Pat Benatar, MT friggin’ V, and Tom Petty recording “Free Fallin’” in the late ‘80s. And while the Petty stuff is fine, what’s bizarre is that Hartman fails to mention his association with the Traveling Wilburys.

Actually I started to wonder why Goodnight, L.A. even exists. I guess as a piece of popular history it’s fine, but readers looking for more meat will be disappointed. I mean we’re often informed that such and such a group is recording such and such an album, but rarely if ever are various tracks discussed, let alone dissected; a simple Google search would yield more info on each of the acts than what Hartmann tells us, even down to the minutiae the hardcore rock listener wants to know about. Goodnight, L.A. is a quick read, though, mostly because it comes off like a collection of magazine articles. And Hartman’s enthusiasm wins him points.
Posted by Joe Kenney at 6:30 AM

Boston was YUGE in the fall of 1976. I started college that year and they were on the FM radio nonstop. And then...nothing.