Death Of An Informer 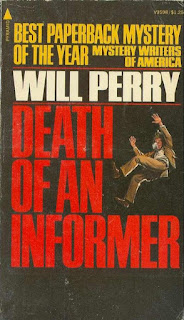 First published by Pyramid in 1973, Death Of An Informer received this ’74 reprint after winning an Edgar for best paperback mystery. After that it seems to have fallen off the map, as you can’t find much about it online. This is too bad, as the novel is very much in the vein of sleazy ‘70s crime fiction I enjoy, with the caveat that there’s hardly any action in it – I mean I was at least expecting a shootout or two, but about the most that happens is a guy gets pushed into the path of an oncoming train.

Will Perry was the pseudonym of a British reporter named W.J. Weatherby who was based in New York for many years and apparently covered the black community extensively. Thus there is a sense of authenticity to Death Of An Informer, which solely focues on the blacks who frequent “The Block,” ie the stretch of Forty-Second Street which runs between Seventh and Eight Avenues in Mahnattan. This is a “hell” (per the hyperbolic back cover copy) of strip clubs, hookers, pimps, hustlers, drug dealers, and everything else you could imagine, and in many ways the novel is a time capsule of a place and an era long gone. If I were to write a novel set in ‘70s Manhattan, I’d surely use this book for topical details.

This certainly isn’t a pulp crime novel, though. Weatherby seems to be shooting for the big leagues, and I’d say the novel has more in common with contemporary bestsellers like Report To The Commissioner than pulp paperbacks like, say, A Piece Of Something Big. But man, it still could’ve used at least a little action; Death Of An Informer really is a mystery, for the most part, so it didn’t win that Edgar by accident. It’s just that the sleazy inner-city setting cries out for more of a pulp-crime sort of yarn, particularly given how well Weatherby brings to life the lurid atmosphere of depravity and decadence.

It is odd though that the book was afforded such acclaim because its characters would have been considered very taboo at the time: gay black cocaine dealers. Well, not all of them are gay, but it’s implied that they all switch hit. And also one of the characters is white, but he’s also a drug dealer, and he’s also gay, and in fact he has a “sickness” for black men. This would be Charles De Gaulle Tyler, the “informer” of the title, whose death is promised on the very first page of the book; the novel opens on what will be his “last day.”

Tyler is 24, an army vet, born and raised in the south by less-than-understanding rich parents. We learn in brief flashbacks that even as a boy Tyler would go off to “consort” with the black men his family employed on their estate; one of his deepest relationships happened in the stockade while he was in the army, with a young black man named Boy Ronnie. Your classic “it happened one night in the stockade” sort of affair. When Tyler came to New York years later he ran into Boy Ronnie again; Ronnie was part of an all-black coke dealing gang, and their boss, a hat-wearing teenager dubbed The Kid, decided to give Tyler a job – as a white man, one of a privileged background, Tyler would be better suited to dealing with the gang’s Park Avenue clientelle.

We actually don’t get much detail on the cocaine business; the Kid keeps everything to himself, running the operation out of a hotel room. In addition to Tyler and Boy Ronnie, the gang is comprised of Sweetboy, Leroy, and Groove. We’re brought into all this by the reflections of Tyler as he goes about what will be his last day, dropping off coke to a few customers and bumping into Sweetboy, whom he has a crush on. Tyler considers himself a chronicler of the Block and thus large portions of the narrative are given over to his rhapsodies about this or that landmark or establishment; again, the book is very much a time capsule, even more so than the Len Levinson novels of the era because it is so focused on capturing the time and the place. In some ways it bears a similarity to Joyce’s Ulysses, if only in its similarity to Joyce’s declaration that his novel could be used to rebuild Dublin.

When Tyler goes back to the Kid’s hotel, he finds himself walking into a frosty reception – even Boy Ronnie refuses to meet his eye. It turns out Sweetboy has been arrested and Tyler was the last person to see him. As the only white man in the gang, Tyler is instantly suspect number one. He pleads his innocence, but panics and manages to escape. The rest of this section of the book concerns Tyler’s desperate attempt to get off the Block. Weatherby masterfully shows how this once-fantastical place has now become nightmarish for Tyler, and of course he can’t expect any help from the average New Yorker.

Grindhouse enthusiasts will appreciate the references to the plentiful moviehouses on Forty-Second; Tyler passes them by, but doesn’t even have a dime on him so can’t escape inside one for a few hours. Instead he finds his way into a bookstore, where he runs into Boy Ronnie – who tries to help him. However when Tyler tries to use the subway token Ronnie’s gotten for him, someone rushes up behind him and pushes him into the path of the train. All we know, from the testimony of the train driver, is that the assailant was black. The mystery of who killed Tyler is the main plot.

At this point Boy Ronnie becomes our protagonist. The literary asperations that peppered Tyler’s section are gone; Ronnie can barely read, and whereas Tyler at least had an apartment – cockroach-ridden as it was – Ronnie lives on the street, taking “baths” in the sink at the Port Authority and occasionally washing his few clothes at the Kid’s hotel. He’s 21, a former boxer, with a savage knife scar; we learn that he had an affair with his trainer’s wife, and nearly got killed for it. Instead, he lost the ability to box, so now he makes his living dealing coke for the Kid.

Ronnie is one of the switch-hitters on the gang; he had that affair with Tyler in the stockade years ago, but in the novel itself his sexual interests are demonstrated on a blonde girl. I should mention that the novel is not explicit in the least; none of the sex scenes, whether they be gay or straight, are at all detailed. In fact, when Ronnie goes to a grungy hotel with the blonde, he finds himself unable to rise to the occasion, bummed over Tyler’s plight. Later Ronnie has a second chance with the girl, and this time succeeds, but Weatherby leaves the scene off page.

As with Tyler we get the occasional digression into Boy Ronnie’s background, and here we learn the meaning behind his bizarre name; he informs the blonde that in the smalltown in which he grew up there was also a little girl named Ronnie. Thus he became “Boy” Ronnie to the others, and the nickname stuck. But this is a ‘70s New York of colorful nicknames and even more colorful wardrobes, so Ronnie doesn’t much stick out. In fact he thinks other people are weird, like a friend of his who is a would-be pimp, going about in wild fashion and looking for a new stable, despite the wife and kid he has waiting for him back home in the subburbs.

I was under the impression that with the narrative switching from the effete Tyler to the macho Ronnie we’d have an increase in the action quotient. However I was wrong. Ronnie mostly walks around the Block and ponders Tyler’s diary, which he discovered in Tyler’s apartment after searching it per the Kid’s instructions. There is though a nicely-done sequence where Ronnie runs into Tyler’s father, come here from New Orleans to collect his son’s body. The old southerner is numb with grief, to the point that he’s even willing to talk to this black man who claims to have known his son. Weatherby displays the casual racism of the older generations in a nicely subtle way, not banging us over the head with it as such a scene would be rendered today.

When the Kid is finally able to speak to Sweetboy through a lawyer, the Kid learns that Tyler couldn’t have been the informer; as mentioned the Kid keeps the workings of his coke business secret, so that his dealers aren’t privy to each other’s work. Sweetboy was caught by the cops while on a run Tyler couldn’t have known about, thus he was innocent – and shouldn’t have been killed, Ronnie argues. But neither the Kid nor the others care too much about Tyler’s loss. The Kid suspects Groove, and Ronnie is dispatched to round him up – more inexplicit lurid stuff where Groove first goes home with some white dude he just met and Ronnie waits patiently in the foyer for them to screw in the bedroom.

Ronnie feels himself becoming more distant from his “friends” in the gang, to the point that the Kid tells Ronnie to leave as the Kid and Leroy torture Groove – who swears he isn’t a snitch. Frustratingly, the novel seems to be headed for some action just as it comes to a close; Ronnie, adrift on Forty-Second, finds himself in one of those movie theaters as a Western is playing, and there sit the Kid and Leroy a few aisles in front of him. Ronnie immediately realizes which of them is the true informant, and sees himself as the sheriff who is about to take out the bad guy. And here the novel ends!

Weatherby’s writing is strong throughout, with a gift for capturing mood, character, and location. He also nearly succeeds in passing himself off as an American author. Only the occasional gaffe betrays his British background, such as minor things like, “He looked round the room.” Americans don’t look “round” anything – we look around them. And these inner-city black Americans tend to say “quite” a bit too much to be believable, but again, this is nothing major. However, I didn’t even realize “Will Perry” was a pseudonym until I subconsciously detected something “British” about the prose.

While Death Of An Informant won the Edgar and got this second printing, I don’t see any other reprints and it appears that Weatherby’s few other novels, all bearing the “Will Perry” by-line, didn’t receive as much critical attention. They also appear to be relatively rare, at least judging from prices on the used books marketplace.
Posted by Joe Kenney at 6:30 AM