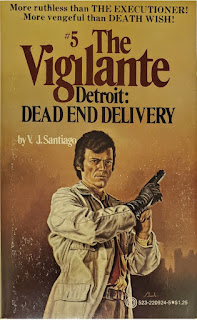 I suspect Robert Lory was getting a little fatigued with The Vigilante; Detroit: Dead End Delivery lacks the fire and brimstone of the previous volumes, and shows evidence of a series increasingly losing its way. Whereas the first volume established nutcase “hero” Joe Madden as a merciless dispenser of justice, cleaning the streets of scum, this fifth volume comes off like a ‘70s take on hardboiled pulp, with Madden acting more like a private eye.

It’s about a week after the previous volume, and this installment marks five weeks since the events of the first volume. As Madden reflects to himself, he’s done some serious work in those few weeks, killing 42 scumballs. Lory at least sticks to the template he’s devised, with a sort of introductory action scene of Madden blowing someone away on the streets of the latest city he’s visiting, but here we already get indication that Dead End Delivery is going to be a bit more sluggish. Lory spends much too long introducing the one-off character Madden saves from a hooker-mugger team who intends to knife the guy in an alley, until Madden appears in trench coat and wide brim hat and blows them away.

All this is well and good, but the thing is, Lory spends so much time on this one-off character’s plight that the actual justice-dispensing is basically skirted over. That being said, Madden again shows his viciousness in blowing away the woman who has lured the would-be victim out onto the street; this is the fourth woman Madden’s killed, not that it causes him to lose much sleep. And really that’s it for the “vigilante” stuff of the book. I really do think Lory had gotten bored with the series concept at this point, as he comes up with a storyline that has nothing to do with the previous four volumes – even the subplot about the New York cop who might’ve figured out Madden’s game is dropped this time.

Madden’s come to Detroit to accept an award for his firm; none of the previous volumes have dwelt too much on Madden’s day job (wisely), but this one’s humorous in how quickly it’s passed off. Madden’s there to accept the award and leaves the luncheon as soon as he’s given his speech! Meanwhile he’s decided to stay in Detroit a few days, as the night before, after killing the would-be muggers, he bumped into an old friend at a bar: Stan Hart. Hart’s in trouble and wants Madden’s help – the implication is that Hart must detect some innate quality in Madden’s steel-eyed, scar-faced visage which screams: “I can help you.”

Hart’s story goes that he’s working on a top-secret auto engine plan, and someone keeps stealing his plans. He suspects Tander, his boss at the firm, of being behind the thefts. He’s gotten so nervous that he’s hired a grungy P.I. named Voll and he’s also told his wife and kid to leave town. He doesn’t elaborate what exactly he hopes Madden can do to help him; for all he knows, Madden’s just an engineer. But again, the intimation is that the scarred face Madden now sports lets people know he can handle dirty jobs.

And it is a dirty job, as next morning Madden finds out Stan Hart took a head-dive out of his corporate office. It was clearly murder, but staged to look like suicide…and if it’s deemed so, Hart’s family won’t get a dime of insurance money. This Madden learns when he visits Hart’s widow, and finds Hart’s boss Tander also there. Madden realizes that Hart was right in his suspicion; Tander is indeed behind the blueprint thefts and he probably also killed Hart. Of course Madden will be proven correct, and we get more indication of the somewhat padded nature of the novel with too many sequences from Tander’s point of view, how he’s stealing the plans to make it big, selling them to some Mafia thugs.

But then it’s kind of padded throughout; I mean there’s a part where Madden goes to the downtrodden building in which P.I. Voll offices out of, and we get copious description of the place’s façade and bedgraggled appearance. It’s all nicely written, sure, but isn’t what this genre demands. I mean, I know it had to be a drag to turn in men’s adventure novels several times a year, toiling under a house name with no critical attention, but still…to me, it would be a simple matter to fill the pages, despite the author’s boredom. Your character is a vigilante? Then put him on the street and have him gun down some criminals!! I mean it isn’t rocket science, is it? And personally I would’ve rather read random snatches of Madden gunning down street-dwelling punks instead of the half-baked, low-simmer yarn Lory’s given us.

Action is minimal because it turns out this is all Madden’s up against…sniveling coporate ladder-climber Tander. We aren’t exactly talking about a supervillain here. The only person he’s got at his disposal is a hitman he hired; Madden has a brief firefight with the guy in Hart’s office, but doesn’t exact revenge until later in the novel. Lory has to come up with arbitrary action scenes to meet his quota, like three young punks who accost Madden on the street one night as he waits to ambush Tander. This sequence, even if arbitrary, reminds us of the cold brutality of our hero; he guns the three down almost as an afterthought, despite their pleadings.

Even the lurid stuff is minimized; Tander has a hotstuff wife, and the implication seems clear that Madden will have sex with her, per the ‘70s men’s adventure template. When the expected scene happens, Lory initially appears to be catering to the template; Madden goes to Tander’s house during business hours, while Tander is in the office, and storms inside wearing a ski mask. And naturally sexy Irene Tander is only wearing a nightie at the time. But even here Lory gussies it up with overdone plotting; Madden bullshits the girl into thinking he has the “real” documents Tander’s been looking for and will let her share in the profit, at her husband’s expense. To prove her trustworthiness, Irene treats Madden to a dual blowjob-handjob…no doubt the only moment in literary history in which oral sex is compared to a symphonic movement.

But that’s it…Madden doesn’t do anything else with her. At leat here we get a laugh-out-loud reminder of Madden’s increasing psychosis; after Irene has finished her oral ministrations, Madden momentarily considers blowing her head off right then and there! Instead he strings her along, and ultimately sends her to Voll’s office, framing her for the private eye’s murder. This part’s hard to buy, given that the guy’s been dead for a day or two at this point, but Madden gives the cops an anonymous tip and siccs them on her just as she’s entered the office, and last we hear Irene’s under arrest.

It’s clear though that we are far removed from the series concept at this point. Instead of cleaning up the scummy streets of Detroit, Madden dicks around with Tander, determined to prove Stan Hart was murdered and didn’t commit suicide. More interesting is the subplot: Dead End Delivery opens with a Mafia underling named Vincent Bell getting the word out to the various families to be on the lookout for a guy named “Joe” with a scarred face, sending out the police sketch made of Madden in the previous volume. This promises some thrills, but when Madden runs into the chief Mafia thug here in Detroit the guy swears he won’t tell anyone that “Joe” is in Motor City.

There’s only one more volume to go, and if this one’s any indication I suspect Lory won’t be wrapping anything up. But I would’ve preferred more about this than the “A” plot, with all the Maguffin stuff about the auto engine plans and whatnot. Lory sees it through, though, with brief action scenes as Madden takes out the occasional hitman or Mafia thug. There’s nowhere near the action level of previous books, though – not that this series was ever action-packed – and the finale follows suit, with Madden luring Tander into a fitting end: falling to his death, just as Hart did.

Well, next time Madden heads to D.C., and hopefully the last volume will be better than this one. In the meantime, here’s a contemporary interview I found with Lory, from 1973, which also features a few words from his mother!
Posted by Joe Kenney at 6:30 AM

Sounds like it might have been better off for the series either (a) sticking with what had worked to that point, or (b) have started off as a '70s take of hard boiled detective fiction to begin with.