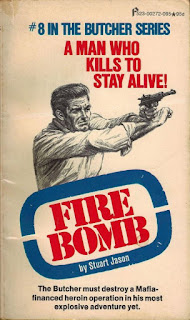 This time I’ll try skip my usual belabored overview of how this volume of The Butcher sticks to the same repetitive theme as the previous installments, with only the most minor of variations. Instead I’ll just bluntly say that at this point James “Stuart Jason” Dockery’s series is becoming almost a chore to read, with each volume coming off like a lazy rewrite of one that came before.

So we open, as always, with Bucher in some unstated city, being trailed by a pair of Syndicate goons out for the bounty on his head. These parts are always my favorite in the series, but Dockery doesn’t get as outrageous this time, other than that one of the goons goes by the handle Rum Dum Lagoona, but Bucher knows his real name is Percival Pinkham. Other than that it’s the usual “kill quick or die” from Bucher, who guns both down without breaking a sweat…on to the customary jail scene, followed by the customary “out of jail” scene thanks to some calls behind the scenes. This time we don’t get the customary “illegal for Jesus Christ to own” line about Bucher’s silencer, though.

Bucher’s already on his assigmnet: trying to figure out how big shipments of heroin are getting into the country. As ever it has something to do with a Syndicate bigwig he knew years before, when he too was a Syndicate bigwig. This one’s named Johnny Procetti and his nickname’s “Fireball” because he likes to douse women in gasoline and light ‘em up. And also we get “foreshadowing” that the plot will make its customary left turn midway through; Bucher just happens to see in the paper that some people in Mexico and the Southwest are coming down with radiation burns, and something in the back of his head is alerted by the news, though he ignores it. Of course, this will be brazenly shoehorned into the main plot before novel’s end.

First stop is Reno, where Bucher storms his way into a bar owned by another Syndicate associate of years past. He and Procetti were once pals but now the sleazebag reveals that he has a hit out on Procetti and hasn’t seen him in months. Bucher for some bizarre reason takes off immediately upon learning this, but runs into the “dowdy” hostess he just got fired from the bar, the owner pissed off that she allowed the Butcher to get past security. Her name is Anna Helm and she claims to know where Procetti is, but will only tell Bucher if she can come along: her sister was firebombed by Procetti and Anna wants revenge.

Bucher as ever is all business, even after Anna is revealed to be a smokin’ hot, built babe, whose “dowdiness” was really just a disguise. She claims it was defense against the notoriously-lecherous bar owner. As ever though Dockery does not exploit his female characters in the least; he refers to them in almost a romantic poetry vibe, with little of the “upthrusting” or “curvy” or even “jiggling” that this genre demands. And while Bucher is gobsmacked by this beauty to the point he doesn’t even realize it’s the same Anna Helm he agreed to bring along, he promptly gets back to worrying over the case, with absolutely zero thought on how to get her into bed posthaste.

The trip to Mexico is over in a few pages, only lasting long enough for Bucher to run into a quartet of infamous Syndicate hitmen who are humorously built up as being the most dangerous, vile group of killers in history – and then are casually dispatched by Bucher in just a few sentences. More importantly, here Bucher briefly runs into Blood Red Sal, an old Syndicate flame of his whose nickname comes from her penchant for eating raw meat to preserve her beauty. This bit goes nowhere other than for Sal to inform Bucher that Procetti is likely in Iraq – so in other words, once again Bucher is headed for the Middle East.

Here in Baghdad Bucher gets wind of the infamous Hashashin, aka those favorites of pulp writers everywhere – the mystical order of hash-lovin’ assassins who in Medieval times were sent out by the Old Man of the Mountain. Well, they’re back in business, and an always-masked personage dubbed “Ibn Wahid” is their mysterious leader. Bucher learns all about it thanks to Karamene, hotstuff mistress of disguise who, along with her brother, operates for White Hat here in Baghdad. Once again Karamene is described in terms having more to do with grace and beauty, and Bucher finds himself falling for her, to the point where he thinks he might be in love. Whoever guesses what happens to Karamene wins a no-prize.

Meanwhile Bucher does believe it or not get laid; Anna Helm has been throwing herself at him relentlessly, and Bucher finally gives in…and, as ever, the incident happens entirely off page. This is bad enough, but what’s worse is the lazy plotting Dockery presents us with; shortly after this Bucher remembers that Karamene had translated a message from White Hat for him – Bucher just put the note in his pocket and forgot all about it. Well, he remembers finally, reads it…and this letter he’s had all along in his friggin’ pocket tells him who Ibn Wahid is, what the plan is, and etc! And if he’d read the note a few chapters before certain characters would still be alive.

What’s crazy is Dockery is a fine writer, at least in his dialog and bizarre characters. But man he needed some help with plotting. Or who knows, maybe The Butcher was intended as a satire, one played so dead straight that no one noticed? Even if that’s so, the dude could’ve at least come up with something new each volume. As it is, Fire Bomb is nearly a direct ripoff of  #4: Blood Debt, even down to the “surprise” reveal of the main villain’s identity (and gender) – someone Bucher has become “close” to. But then, Bucher already knows who Ibn Wahid thanks to that note, thus the removal of the villain’s mask isn’t a shock to him. The strangest thing is that it’s mentioned here that Bucher’s never killed a woman, even though he did way back in #3: Keepers Of Death, where we were told it was the first one he’d ever killed.

I was really digging this series when I started it, but now it’s looking more like the later ones by Michael Avallone – of which I’ve only read one so far, #34: The Man From White Hat – might be better. Dockery’s stubborn insistence on sticking to the same damn plot, over and over with only slight variations, is quickly sinking The Butcher. Seriously, if you’ve read one you’ve read them all.

Then slowly he turned from the scene of violence and death, turned toward the helicopter beside the runway a few yards distant, the weary slump in his shoulders more pronounced and the bitter-sour taste of defeat strong in his mouth.
Posted by Joe Kenney at 6:30 AM

There are two Butcher novels -- I forget which two -- that literally have the exact same opening chapter. The only thing they changed were the names of the Mafia goons that were after Butcher. Other than that, it was cut-and-paste. I've never seen anything that blatant in series books other than the stuff William W. Johnstone did (a lot of his books are at least 60% paste-ins from previous books... not only was he a terrible writer, he was a lazy one).

I like Butcher, but I wait a long time between reading 'em, to give the formula a little time to fade in my memory. It's always weird to me that someone would get the privilege of being published and read, and then just turn in don't-care material. I guess once they've gotten a ton of books out, under house names, the thrill of it wears off. Still, though, it's such a weird phenomenon.

I read several of them in the 1970s, back when I would practically every men's adventure series that came out. They were okay, nothing special, but very repetitive, like you say. The opening chapters are all the same, the villains are always sexual deviants, and it always closes with "the bitter-our taste of defeat" in Bucher's mouth. Although I sort of liked that last line. Reminding you that Bucher will never really win, just survive and go onto the next chapter.