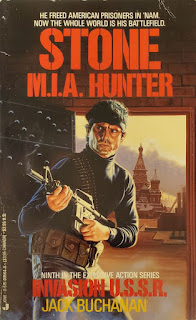 MIA Hunter ventures into uncharted territory with this ninth installment, which sees a return of the same authors from the previous volume: Arthur Moore and Stephen Mertz. But in many ways Invasion U.S.S.R. seems to be from another series entirely, replacing the Southeast Asian POW-rescuing adventures of the earlier volumes with a sort of sub-Ludlum Cold War thriller. I found the results decidedly mixed.

For one, there is a bit of continuity, which makes me assume series editor Stephen Mertz was taking a firmer hand; the early volumes rarely if ever referred to each other. Here we have a reminder that Stone and team (Texan Hog Wiley and Brit Terrence Loughlin) are now employed by the government, thanks to the efforts of Senator Harler. Rather than illegally going into ‘Nam and neighborhood to rescue American POWs, they now go around the world to rescue captured American notables. Not technically MIAs, then, which makes Hog’s announcement, “We’re the MIA hunters” late in the novel sound a bit forced.

This time an American journalist who moonlights for the CIA is captured in Moscow. His name is Lee Daniels and the authors pad some of the pages with cutovers to his plight; this is another hallmark of previous volumes but Daniels seems to get a lot more attention. Unfortunately I found his story, which has him shuffled around this or that Russian sanitarium and grilled by this or that Russian flunkie, to be a bit tiresome.

I wanted action, baby – and shockingly, for a series known for big action scenes – Invasion U.S.S.R. is a bit lackluster in that department. It is for the most part a slow-moving thriller in which Stone and team are relegated to using pistols instead of their customary assault rifles. That being said, the author(s) do a better job of bringing the main characters to life, especially Loughlin; whereas he was a terse cipher previously, now he has a gift for sarcastic retorts. (And I still think there’s buried subtext that the dude’s gay – just sayin.’)

Stone, Hog, and Loughlin are called in by Harler to accompany him as “security” on a trip to Moscow. Their real goal will be to secretly find Daniels and exfiltrate him from whatever secret location the damn commies have him stashed away in. We get a bit of humor here with wily Hog (clever pun alert) chafing at the attempts to make him look respectable, complete with haircut, suit, and tie. The result, per Stone, “looks like a wrestler on his day off.” After this though, other than the occasional Hog-Loughlin banter, it’s a mostly humorless and dry affair.

It’s all very, uh, different, as Stone is suddenly meeting with embassy personnel and in-country CIA agents. As stated it just seems like a completely different series. The random action scenes still appear, a little less frequently, but they aren’t as overdone as the ones in the ‘Nam adventures. In fact it seems like Loughlin is forever stealing a car and the trio are sneaking away on the darkened streets after some random firefight with their appropriated pistols. It’s like the author(s) wanted to do a fairly realistic Cold War spy story while at the same time accomodating the action quotient required by the men’s adventure genre. For example, soon enough Hog is shooting helicopters out of the sky, something we’re told he’s quite good at.

The team gets in action posthaste, going off to meet with their CIA contact but walking into an ambush. This is just the first of many following sequences in which the boys get in a firefight, Loughlin hotwires a car, and they get away from the encroaching KGB. This happens so many times I started to suspect it was a subtle attempt at humor, and possibly it was. Stone and team don’t really integrate well into the shadow war mindset; they make cursory attempts at maintaining secrecy but keep getting in brief skirmishes with roving KGB patrols, making their getaway in stolen cars. Strangely neither Senator Harler nor the embassy folks get much frustrated by this, and just meet the team’s frequent requests for info, contacts, or more guns.

One thing that hasn’t changed is the lack of sexual material – in the men’s adventure of the ‘80s, only the protagonists of  post-nuke pulps got laid. The protagonists of regular men’s adventure were too busy checking their guns and stuff to mess around with womenfolk. But we at least get the promise of it – first Stone’s put in contact with a pretty female agent based in Moscow named Rima…who doesn’t do anything but cook for them. Later when the action moves to Moscow they’re put in line with Anna, a hotstuff Swedish agent whose ample charms are much admired by Stone and team…but there’s absolutely nothing in the way of sexual hijinks. The idea is so remote that it isn’t even mentioned.

For the most part Invasion U.S.S.R. concerns “the MIA hunters” going around Moscow, trying to find leads on Daniels, and always being one step behind the KGB force that has him. Late in the game the action moves to Leningrad, but even here it continues in the same pace as the Moscow material: they meet up with some local CIA agents, sneak around the city, get in brief skirmishes, hotwire a car, and make their getaway. The action promises to expand when the team is captured by the cunning KGB officer who has Daniels, Stone and team walking into yet another ambush, but Anna manages to free them within a few pages.

The big fireworks are saved for the finale, in which Daniels is finally located inside a sanitarium-fortress near Leningrad. But whereas the previous books would feature Stone and team hitting the base with some native soldiers backing them up, this time they follow a goofy, pseudo-Mission: Impossible scenario: they let themselves get arrested so that they’re put in the sanitarium’s jail, and then they try to figure out a way to break both themselves and Daniels out. What’s worse, there isn’t even a final comeuppance for the KGB officer who has taken up so much of the narrative.

Despite being 180-some pages, Invasion U.S.S.R. seems to be longer. Even though the writing is fine, with a clear attempt at conveying suspense and tension, the book just seems sluggish at times. I’m assuming this one was just a misfire and the series will get back on track, but I do feel that this new angle with Stone’s team being a rescue unit isn’t panning out very well. I mean there has to be at least a few POWs they could look for in ‘Nam…
Posted by Joe Kenney at 6:30 AM