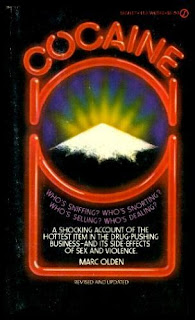 This is basically the primer for Marc Olden’s Narc series, sort of the “nonfiction” version of it. I put that in quotes because for the most part Cocaine reads like fiction…many, many stories of drug dealers and the narcs who pursue them, with even the oddball “fact” coming off like fiction (like “the famous rock group” that was busted for coke possession and wrote a number one song about it, even sending the narc who busted them a thank-you note).

Like Narc, Cocaine started life at Lancer Books before moving over to Signet; this edition is “revised and updated” from the Lancer edition, which was published in 1973. But of course Narc was published under the pseudonym “Robert Hawkes” (even though each book was copyright Olden), so Signet lost a good co-sell opportunity. At least Olden’s Black Samurai series, also from Signet, gets a shout-out, though Narc would’ve made a lot more sense.

In fact, Olden’s main informant throughout Cocaine is “Jerry,” identified as an undercover narcotics agent for the DEA. Man how I wish Olden had gone all the way with it and named him “Jon,” ie Jon Bolt of fictional drugs enforcement agency D-3 in Narc. But I’m betting Jerry served as inspiration for Bolt; Olden thanks several people at the end of the book for their help in the research, with “Jerry” one of them, so I’m assuming he was a real person and that he factored into the creation of Jon Bolt.

Otherwise the contents of this book are identical to those in Narc, even with the same sort of arbitrary subplot-hopping. I’ve complained in more than a few Narc reviews how the narrative will abruptly jump into the almost stream-of-conscious thoughts of such and such a character. Well, that happens for the entirety of Cocaine. It’s basically one short-short story after another. And also Olden’s repetition is firmly in place – he’ll tell you the same thing at least three times.

But that’s cool, because this is one of the most “1970s” books I’ve ever read. I mean it could almost come with a pair of platform shoes. It’s all about hip black and Cuban coke dealers in all the fly fashions of the day, sticking it to the Man. And that’s another difference from earlier drug books, like Smokestack El Ropo’s Bedside Reader. Whereas that one was more of a countercultural book, looking at the pleasures of marijuana and hash, Cocaine is more about the crime and the violence. There’s very little here that would tell you why people were going so crazy over coke, nor much about the effects they feel when under the influence. And for that matter it’s not even so much about the dangers of coke, other than a few mentions of ODs and such. It’s really more about the crime-ridden underworld that has sprung up around the cocaine industry.

Olden does tell us a little about the drug users in the opening chapters – basically all the hip people of the day, from artists to rock musicians to swingers. Pretty much everyone, when it gets right down to it. But the high rollers are the biggest users, because coke isn’t cheap; Olden tell us that it’s $25 to $75 per spoon, and that’s for heavily cut coke. More pure samples are not only pricier but harder to find.

One thing I can say I learned from this book is how cocaine is harvested and manufactured. Previously it was kind of a mystery to me. Basically it’s taken from South America and enters the US via New York or Miami, cut up and processed in various mills. The Mafia doesn’t have much control of it given the South American source, thus has focused its interests on oldschool crime like gambling and hookers. But really Cocaine offers a look at the environment which would create the crack epidemic of the ‘80s; increasingly violent black gangs and Cuban gangs vying for dominance of the coke industry. Olden says there’s no question the Cubans are more violent, and I wonder if this book factored into Oliver Stone’s script for Scarface.

The book follows the same format for each chapter. Olden will introduce some aspect of the coke industry, ie Dealing or Ripoffs or whatever, then will illustrate each aspect with pseudo-fictional short stories. I was most interested in the section on the mills, which are generally in bad areas of town and overseen by women, who monitor a small group of people cutting up the coke, all of them in masks. The ripoffs material was also interesting, and very heavy in that ‘70s crime vibe – “ripoffs” being the term for coke dealers ripping each other off. And as previously mentioned the Cubans are much more vicious in their ripoffs, or when they track down a ripoff artist; blacks are more content to frame the ripoff artist so that he’s arrested.

Things occasionally get sleazy, like a random chapter on pimps, hookers, and coke (and Olden’s description of the outrageous pimp wardrobes just has more of that super ‘70s vibe). There’s the occasional tale of a drug dealer’s superhuman sexual powers, thanks to all the pure-grade coke he’s snorting. Here we learn of the mysterious “Tortilla” practiced by Cuban dealers behind closed doors; a “lesbian orgy” in which women are piled atop one another, occasionally the wives of the dealers even taking part. There’s also “My Hero,” as Jerry refers to him, a Cuban dealer with such machismo that even a mousy and prudish DEA typist gets turned on as she’s transcribing one of his tapped dirty phone conversations.

There’s also a lot on mules, who bring drugs into the country via various novel means, and informants, generally dealers who’ve been caught and decide to work for the Man for a lesser sentence. Olden published a novel titled The Informant in 1978, also a Signet paperback original (and incredibly overpriced, but luckily now available as an eBook), so I’d wager this section factored greatly into that later novel. It already reads like a thriller here, with Olden stressing how dangerous the life of an informant is; once outed by their drug world comrades they are shown no mercy.

There isn’t as much about the narcs themselves; the DEA was fairly new when the book was written, or so Olden informs us, and we even learn that the drug cops had just started carrying weapons. But obviously the men’s adventure vibe of Narc isn’t present here, these stories being true (or at least presented as true) and thus more realistic in the brief snatches of violent action; there is though a nicely-done shootout late in the book which unfortunately sees a young DEA agent killed in action. Otherwise the lot of the narcs is presented as a thankless one; they aren’t out to bust hippies or the occasional drug user, just the big fish, and to do so they have to sit around for long stretches of time before putting their lives on the line. There are also some interesting stories about undercover jobs.

Overall I enjoyed Cocaine more than I thought I would. It definitely has that ‘70s crime vibe I’ve always enjoyed, and the pseudo-fictional approach makes it a lot more entertaining than a typical study on cocaine would’ve been. It’s even the same length as one of Olden’s Narc or Black Samurai novels, coming in at 172 fast-moving pages of fairly small print.
Posted by Joe Kenney at 6:30 AM

It looks very interesting. The lead 70s to full.