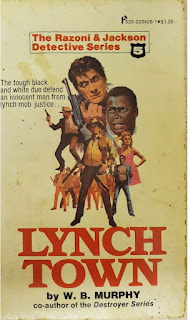 The final volume of Razoni & Jackson has “the tough black and white duo” spending the entirety of the narrative in Alabama, a comically overdone Alabama filled with racist rednecks who are eager to don their KKK robes at the drop of a hat. And this includes the town Sheriff. Otherwise Lynch Mob was my favorite volume yet in the series, even though our heroes are outside their normal stomping grounds of Manhattan and, as ever, there’s not much in the way of action or sex.

It’s certainly fast-moving, though. Warren Murphy’s skill is in the dialog, and he’s in top form this time, with fiery banter throughout. This is proven posthaste as we meet our heroes after they’ve been on the road together for several hours, Jackson driving and Razoni sleeping. They’re headed to New Orleans for a detective’s convention (the back cover incorrectly states Miami), and their respective women – Jackson’s wife Sara and Razoni’s girlfriend Pat – have flown ahead. Our cheapskate heroes gave the women their plane tickets, then “borrowed” a ’71 Chevy from the precinct for the drive south, even though the car’s not supposed to leave Manhattan.

The narrative picks up as the two decide to finally pull over for some food. The arguing here over Jackson’s driving, and his unwillingness to pull over for food or bathroom breaks, calls to mind the similar bantering of Philip Rock’s Hickey & Boggs, which I still say served as a huge inspiration for this series. Unfortunately Razoni picks little Pinkney, Alabama as the place to find a restaurant. From the get-go they are assailed by redneck yokels in the small town, but things really come to a head when the fat slob owner of a dive refuses Jackson service because Jackson is black.

Word to modern sensitive types – there’s a lot of racist invective throughout Lynch Town, which is humorous given that Murphy clearly wants us to understand the racist locals are the bad guys. But the dreaded n-word is tossed around a lot…and when Murphy does show black characters, even in a sensitive light, he has them shrieking stuff like “Hallelujah!” while having house parties. But clearly this sort of stuff isn’t intended to be taken seriously, and I imagine anyone actually seeking out this book (which is as scarce and overpriced as the others – and I still haven’t gotten the first volume due to that fact) will already know what they’re in for.

Razoni and Jackson don’t know what they’re in for, though; in a wildly over-the-top subplot, young Pinkney resident Flasher Potter is planning to knock over the town bank while wearing a rubber “Negro” mask with a wild afro. We’ve already learned that Flasher occasionally rapes women while in this disguise, secure in the fact that none of the victims will go to the cops due to being ashamed. All this sort of reminded me of the obscure low-budget 1974 crime film The Zebra Killer, aka The Get-Man and a bunch of other titles. It too featured a sadistic redneck villain who disguised himself as black.

One of Flasher’s victims was the wonderfully-named Tulsa Cuff, the pretty-in-a-tarnished-way young waitresses at Buford’s restaurant. And by the way, Buford is Flasher’s father; a recurring joke is that a large portion of Pinkney is made up of the Potter family. This bodes ill for Razoni, given that he smashes two raw eggs in Buford’s face for being a racist prick, then later slams his head into a car. Buford’s brother is the town Sheriff, thus Razoni is hassled good and proper for the remainder of the text.

The action highlight occurs early on. Flasher robs the bank just as Razoni and Jackson are leaving Bufford’s diner; Murphy by the way pulls a few Elmore Leonard-type tricks with time, showing events happening concurently. The bank hit is pretty bloody, Flasher in his mask and “fright wig” showing no mercy to the old bank guard and the president – even though he’s friends with them, given that he works there! He’s chased down the street by cops and carjacks the first vehicle he comes to, which of course happens to be Razoni and Jackson’s Chevy. And Jackson happens to be behind the wheel at the time.

Razoni isn’t worried about Jackson – he’s worried about the car. In fact Jackson is guilt-tripped that he even let the armed punk carjack him! Jackson immediately knows that this is a white man in a rubber mask. He also notices the penny loafers Flasher is wearing; as ever, it’s deductive logic which cracks the cases in this series, not gun-blazing action. And for that matter, both Razoni and Jackson have locked their guns in the trunk of the Chevy and never even get their hands on them in the course of the novel. Flasher’s the only one who does any shooting; after Jackson crashes the car into a lake, the masked punk gets up on the sinking car and takes a few shots at Jackson as he swims away.

From there it’s more of a slow-burn “racist town” caper. Sheriff Potter (Bufford’s brother and Flasher’s uncle) rounds up a young black local with radical politics named George Washington Clinton and pins the bank heist on him. Jackson’s statements that the “black man” who carjacked him was really white of course fall on deaf ears…save for state cop Lt. McCabe, the only local policeman in the novel with any intelligence.

While Jackson meets with the Clinton family to confirm their son’s innocence, Razoni seeks out waitress Tulsa Cuff for more info on the Buffords. He ends up having some off-page lovin’ with her, even checking into a hotel with her, and while there’s zero sleazy detail Tulsa is well-handled and comes to life more than the average men’s adventure babe. There’s also a somewhat-touching backstory about her mother dying, hence her return to Pinkney from “the big city, and how she’s now abused by her alcoholic father. Tulsa also factors into the finale in pure pulp style: tied bare naked to a tree by a bunch the KKK, to be killed for having sex with Razoni!

This is what makes for the climax, but even here Murphy goes for more of a comedic vibe. The Potters whip their KKK brothers into a frenzy and they all don their white robes to go round up Razoni and Jackson. Jackson is still at the house party in the black area of town and the residents successfully fight off the KKK, though the action is bloodless – everyone’s a terrible shot and the KKK runs away. The other faction of KKK fares better, charging in on Razoni and Tulsa in their hotel room and pulling them away, Razoni punching and fighting all the way.

The finale is a retread of #3: One Night Stand, with an enraged Jackson coming to Razoni’s rescue. Leading the group of black locals, they tear into the woods behind the hotel and find Razoni and Tulsa tied to trees, Razoni in the process of being whipped by a cat o’ nine tales. Jackson goes ballistic, throwing KKK scumbags around and bashing them up. The heroic act is of course undercut by Jackson’s shout that only he can whip his partner. Razoni spends the entire action scene out cold.

It makes for a fitting conclusion to the series, even though the series ad at the back of the book promises “And more to come…”; that same hyperbolic line Pinnacle used for all its series advertisements. But Lynch Town was the last volume, ending with our heroes finally headed for New Orleans, bickering away. However Razoni and Jackson returned twelve years later, as supporting characters in the sixth volume of Murphy’s Trace series, Too Old A Cat. I’ll be checking that one out next.
Posted by Joe Kenney at 6:30 AM

Also the similarly titled The Zebra Force, from 1976, featuring an entire crew of dudes doing that.

Damn, I woulda guessed Jackson was the white dude. ;)

The 1983 film The Survivors involves a white criminal (played by Jerry Reed) attempting to rob a diner while disguised as a black man. In this case, though, the disguise is just a mask and clothes that conceal all his skin, plus an accent.