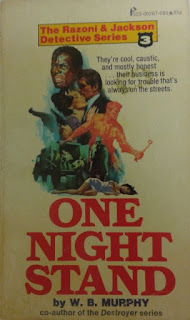 Our favorite feuding detectives return in the third installment of the short-lived Razoni & Jackson series. As expected, the novel is low on action and thrills and more focused on witty banter, running jokes, and actual crime detecting. Author Warren Murphy again proves his mastery of dialog and character, though to be sure those looking for the lurid quotient expected of the men’s adventure genre will be a little let down.

The opening is appropriately sordid, though; an attractive young woman, wearing only a trenchcoat (a la Kiss Me Deadly), flags down a random motorist one night in New York City, pleading with him to give her a lift. A pair of cops, clearly in pursuit of the lady, pull the motorist over, and she tries to hide beneath the seat as she begs the driver not to tell the cops she’s there. But the dude, bowing to authority, does exactly that. The cops – one a lanky, gaunt-faced white guy, the other a muscle-bound black dude – haul the woman out of the car and there, right in the headlights, shoot her in the head.

Perhaps the biggest puzzler of One Night Stand is that these cops do not also shoot the would-be samaritan of a motorist as well. Instead they merely get in their car and drive off, leaving one hell of a witness behind. But, had they killed the guy, Murphy wouldn’t be able to work up the mystery which lies at the core of the novel.  I had a hard time getting over this, but what the hell. The motorist gives his story to the police, and it’s yet another knock against New York’s finest, who have been coming under increasing fire thanks to the liberal scum who have taken over the justice system.

Chief among the scum is Jason McCarter, an inheritor of great wealth who decided one day to become a liberal lawyer, because liberal lawyers get the most “media space.” Championing the rights of “wrongfully accused” criminals and murderers, McCarter has becoming so powerful and famous that he’s headed for bigtime politics. He has an ace in the hole though; a dimwited clerical room detective named John Hardin, McCarter’s nephew, who hooks McCarter up with case files, which McCarter uses in court to exonerate his crooked clients.

When we meet them, Razoni and Jackson are currently trying to bust Hardin – without the knowledge of their boss, Captain Mannion. This is yet another of Murphy’s trademark humorous scenes, which has Razoni and Jackson taking out their respective lady friends (in Razoni’s case it’s his redheaded knockout of a girlfriend, Pat; for Jackson it’s his equally-attractive wife, whose name I’ve forgotten) to a fancy restaurant. What the women don’t know is this is actually a stakeout; the two cops are here to see if Hardin’s going to deliver a certain case file to McCarter. Unbeknownst to Hardin, this particular file was written by Razoni and Jackson themselves; it’s a fake, one designed to bring McCarter’s illegal practice out into the spotlight.

While it goes down smoothly, trouble ensues: a pissed-off Mannion informs our heroes the next morning that none other than Jason McCarter has been appointed by the governor (a notorious cop-hater) to look into police corruption, especially given this recent murder which was apparently perpetrated by two cops. The whole fake case angle might end up blowing up in their faces if McCarter finds out about it. Meanwhile Razoni and Jackson are given their urgent assignment: found out who really killed that young woman, who turns out to be a hooker named Claire Coppolla, and clear up the case before McCarter’s commission gets everyone fired.

As mentioned, Razoni & Jackson is not an action series by any means, even though it was packaged as yet another Pinnacle men’s adventure series. Our titular heroes use their brains more than their brawn – actually, they use their mouths more than anything else, bickering and bantering like an old married couple. This particular volume falls a little flat on the recurring jokery, though, in particular to a running gag about a “black jockey with bruises on his palms” or some such. Not that the racist-tinged barbs (from each direction) bother me, it’s just that they aren’t as funny this time out. But in between the back-and-forth our heroes try to figure out who killed Claire Coppolla and why.

Their investigation takes them across the dingier areas of New York, from the apartment Claire shared with another young and attractive girl (and also a hooker, though only we readers know that initially) named Renee Charver, to a truckstop diner/cocktail lounge called Delaney’s where Claire supposedly did a lot of secretive business. We also get a view into the long-gone world of rampant smoking, as the plot centers around a cigarette distribution facility in which tax stamps are put on cigarette packages; a sleazebag named Kitsky runs the place and Claire’s brother, an ex-con, works there, and we’re treated to lots of detail on how the machinery operates.

The most enjoyable sequence is also the most lurid; Razoni’s girlfriend Pat is once again used as bait. Having determined that Renee is a hooker and that she ran some sort of two-girl con job with Claire, Razoni and Jackson set Pat up as a hooker and send her to a bar Renee frequents. Let’s just say the two attractive ladies become real friendly real quick, with “AC-DC” Renee inviting Pat back to her place for some all-night lesbian shenanigans! And Pat eagerly accepts!! Murphy doesn’t write the details, but he does have an exhausted Pat calling Razoni the next morning to report, with Razoni increasingly jealous, bitter, and frustrated over what he suspects Pat spent the whole night doing.

It gradually develops that Delaney’s is run by a corrupt group that cons truckers who haul cigarettes; Kitsky, the distribution center owner, has come up with a scheme where these truckers are distracted by hookers (kindly offered by the propietors of Delaney’s), who talk the truckers into letting them ride along to the next city. But when the hooker gets the trucker to pull off the road for some quickie sex, a lanky, gaunt-faced guy named Al and a muscle-bound black guy named Earl storm onto the truck, disguised as cops, and threaten to bust the trucker, as it’s against the law for them to have passengers. Eventually the trucker will cop a “deal” with them, promising to drop off a delivery of illicit cigarette crates on each future trip in exchange for the cops keeping their mouths shut.

Razoni and Jackson don’t figure all of this out until the very end, though they do realize that Claire Coppolla was killed because she’d gotten wind of something she shouldn’t have. They themselves don’t get into danger until the final pages. Planning to bust the extortion racket, Razoni goes undercover as a trucker, his rig loaned to him by the boss of a local truckyard, who turns out to be Captain Mannion’s brother. Jackson is to wait behind and show up when the two fake cops storm the truck to “bust” Razoni. But things go to hell when a drunk Detective Hardin, still pissed over that fake case scenario, shows up when Jackson’s about to leave and hands him a subpoena, demanding that he show up in court asap. Why? Hardin’s been trying to set up Razoni and Jackson as the two cops who killed Claire Coppolla.

Razoni, thinking Jackson’s about to save him, blindly drives into the ambush and is almost beaten to death, his rig crashed by Earl and Al. When Jackson gets away from Hardin, who realizes he’s made a huge blunder, he’s alive with rage, particularly when Razoni’s battered, bloodied, and unconscious body is fished out of the truck wreckage and taken to the hospital. Murphy brilliantly shows the difference between our two heroes; where Razoni is quick to rant and rave but just as quick to forget about it, Jackson is cool and calm…until he gets mad. And when he gets mad, he doesn’t quickly forget about it; when he sees Razoni’s crushed body in the hospital, he’s “boiling over” with rage, to the point where you feel sorry for the bad guys.

The climactic action scene isn’t up to the caliber of The Executioner or anything, but it’s still pretty good. Jackson heads on over to Kitsky’s distribution center, having figured out thanks to his own sideline investigation that Kitsky was actually Renee Charver’s ex-husband and likely the brains behind this extortion scheme. Armed with his .38, Jackson takes on Kitskty and his two thugs, Earl and Al. It isn’t overly violent or spectacular, but this sequence does feature the memorable moment of Jackson strapping Kitsky onto the front of his car and smashing throught he facility’s gate. Surprisingly enough, Kitsky lives through it – and promptly spills the beans to the cops, thus exonerating Razoni and Jackson.

Not to end this review on a sad note, but I recently heard from Warren Murphy’s son, Devin Murphy, the sad news that his father passed away, on September 4th of this year. Here’s a nice writeup about him from the New York Times. I’m sorry to hear Mr. Murphy has passed on, but as was the case with Burt Hirschfeld, Harold Robbins, Don Pendleton, and so many others, he left behind a huge body of work, and will of course live on through it, continuing to provide entertainment to generations of readers to come.
Posted by Joe Kenney at 6:30 AM

I'm very sorry to hear that news, of course.