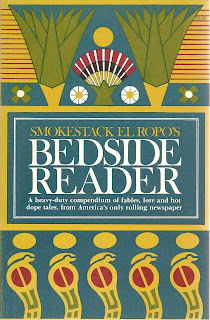 Here’s another Rolling Stone book I picked up several years ago and just never got around to reading – until now! If you want proof that Rolling Stone was originally much different than the slick celebrity-worship rag it eventually became, then look no further than this old trade paperback, published by Rolling Stone’s own imprint, Straight Arrow.

“Smokestack El Ropo” is a by-line occasionally spotted in the first hundred issues of the magazine, usually credited with drug-centric articles; I’ve seen some online comments that at one point people speculated El Ropo was really Ken Kesey. However, it turned out to be an RS editor named Charles Perry. Interestingly, Perry appeared in silhouette, his face intentionally hidden, on MTV’s 1992 documentary 25 Years Of Rolling Stone Magazine. One wonders what the hell that was all about – I recently watched the documentary on Youtube, hence it was fresh in my mind when I read this book – particularly when Perry’s mugshot is on the back of The Bedside Reader. But of course no one at the time likely even knew what Perry looked like, and I only do because I have the perfect hindsight granted by the internet.

Anyway I’m ranging all over the place like I myself have been smoking some of the wacky weed, but sadly that’s not the case. Mr. Ropo himself writes a witty introduction/overview of his Bedside Reader, stating that these articles, features, short stories, and fables have been culled from the first hundred issues of Rolling Stone, showing the dope scene as it was covered at the time. He also mentions that there’s some stuff that didn’t even get printed back then, but I did discover that in one case, as noted below, the version included in The Bedside Reader is actually shorter than the original magazine version.

Speaking of El Ropo, his six “Fables” provide a sort of framework for the book. These are short but humorous yarns, set in some mythical Middle Eastern past – indeed a Middle Eastern theme runs through the book, with images taken from Egyptian hieroglyphs and the like – and they usually concern heroes who use their dope-spawned cleverness to get out of hairy situations. Two of the fables feature Zig, “the trafficker in counterfeit,” who in one story escapes the cops and in another outwits a dealer known for screwing over his customers. Many of the tales have a magical conceit, like an eternal stash that replinishes itself each night – if only you believe and share the stash with others! These yarns all have a goofy charm similar to that found in the RS stories of J.R. Young – whose work by the way would’ve fit right in with The Bedside Reader, but I guess none of it was included because the focus here is solely on drug-related stories.

“King Hash Is Sure To Come” by Sheila Weller – Our first story takes us to Tangier, where Ms. Weller profiles Ahmed, a well-known hash trader who wears a “schlockedelic fake-silk ascot” and has a wall full of photos of himself with various rock stars who have bought his wares. One of his customers was Jimi Hendrix himself, of whom Ahmed says: “This man, he don’t know it, his music from God.” This one’s a short but cool character study that reads more like fiction, complete with Ahmed barrelling through Tangier while blasting a tape of Cream’s Goodbye.

“A Dealer’s Dozen Incidents In The Dope Trade” by Sheila Weller – Weller’s next story is longer and comes across even more like fiction. But then Rolling Stone was known for “new journalism,” aka fake news before fake news was cool, so there’s a fiction-esque vibe to the majority of the stories here. But this one really seems to be a short story posing as nonfiction; it’s mostly dialog from a group of young smugglers, from a girl who is recruited by would-be filmmakers and poses like she’s pregnant, carrying hash in the fake stomach, to a Harvard graduate who now runs a hash farm in Lebanon and discovers that “goat shit” is the secret to getting the best crop. There’s also real fiction-y stuff about “Island X,” off the coast of Spain, where another American trafficker supposedly hid a huge stash of contraband before dying, and dopers are constantly digging the place up at night to find it. Regardless whether it’s “factual” or not, this one’s fun and makes me wish Weller had more stories in the book.

“A Nervous Journey To The Hash Capital” by Charles Alverson – This one takes us to mythical Ketama, a village near Tangier which is the titular “hash capital.” Our author finds that everyone is selling, from the people he bumps into on the street to the kid at his hotel, but there are cops everywhere, and they’re really looking to crack down on foreigners who have come over here for drugs. We get yet another visit to a larger-than-life native drug dealer: Omar, who runs out of an opulent place in the sticks and has some incredible hash for sale. But Alverson and friends regretfully decline, for fear of the cops – only to regret not purchasing anything when they’re able to drive out of town without any police hassling at all.

“Shocking Tale Of GI Drug Abuse” by Arthur Leon – Just like the title says, this one’s a rundown of all the drugs taken by US infantrymen in ‘Nam. “Many of the soldiers in my unit stayed stoned for the entire year of their duty,” Leon informs us, going on to get into the pendantics of how drugs – mostly dope, hash, and some speed – are smuggled into Vietnam, or how you can get good shit from local contacts. An interesting curio of the era, though I have to relate that a friend of mine had a dad who’d served in ‘Nam, on a PT boat – just like in Apocalypse Now! – and that dude once told me he never saw any drug use over there. Regardless, I like to envision my Vietnam-era soldier blitzed on hash and/or LSD while the Doors blare in the background.

“By The Light Of The Kennedy Moon” by Charles Perry – The alter ego of Smokestack El Ropo turns in this short piece of psychedelic fiction, which is just a bit too strange for its own good. The moon is compared to a Kennedy silver dollar – with an offhand comment that if you want some of these you can go to the hospital, where some dying patients have them sewn into their flesh – and the narrator and friend are ripping off a hash field or something. Then a little girl comes out and asks the narrator what an orgasm is, and then the narrator’s partner shows up with a living, breathing sheriff in a duffel bag. Like I said, just a little too strange, but it’s marvelous that Rolling Stone even published something like this, once upon a time.

“Open House At Paul’s” by Charles Alverson – Another goofy one that has the ring of fiction about it. We’re back in Tangier, in the “Frankie Avalon-as-directed-by-Dennis Hopper atmosphere” of Paul, who has a “commune” here that’s more like a ‘50s frathouse with head shop paraphernalia. Not much point to this one, other than to make fun of good ol’ boy types trying to fit in with the changing drug-heavy era, or something. Personally I suspect it’s yet another piece of fiction masquerading as “new journalism.”

“New Mexico And The Acid Cowboys” by John Dean – This is the one I mentioned above, as the author has put the entire original article up on his website.  From this we can see that “Smokestack El Ropo” chopped off the entire first half and last quarter for the version he reprinted in The Bedside Reader. Anyway this one opens in “Brother Daniel’s New Mexico Homestead,” Bro Daniel being a back-to-the-earth hippie farmer, but then the story becomes Daniel’s first-person recounting of his problems with a group of wealthy Americans who like to dress up like cowboys and ride around with loaded pistols. Or as Daniel so wonderfully puts it, “The acid cowboys can blow it for the psychedelic farmers.” Not sure how I made it this far in life without ever reading that sentence. This one’s another strange read, as it comes from such a different era that you have a hard time processing it.

“Johnston Was Talking Low” by Alexander North – Another short piece of psychedelic fiction, this tells the surreal tale of Sgt. Pepper’s blaring on the stereo while some guy fucks his girlfriend. Meanwhile people shout out of windows and take drugs. And Lyndon Johnston talks on the TV, but the sound is too low. Weird, wild stuff, as Johnny Carson would say. Not very interesting, though.

“News Of The Day After Day” by Dr. Elmo Rooney – Look, kids, more short psychedelic fiction. The friggin’ Four Horsemen of the Apocalypse charge across the “Plain of Despair,” smoking some heavy shit and arguing endlessly over which way to go. So they just keep charging along and passing the hash pipe. Perhaps there’s some “deep meaning” here but I didn’t catch it. Cool imagery, though. “Elmo Rooney” was another Rolling Stone pseudonym, perhaps another of Charles Perry’s. Curiously, Steve Martin appeared as “Dr. Elmo Rooney” in a skit in the jaw-droppingly weird Rolling Stone 10th Anniversary Special which was shown, unbelievably, on network television in November 1977. Wait a second, could Elmo Rooney have been a pseudonym of…? Nah. Right??

“Worship At The Planetarium Of Your Faith” by Les Bridges – More psychedlic literature, this time about a group of hippies getting stoned along the Chicago riverfront, then heading to a nearby planetarium and grooving to the trippy lightshow.

Along with all this we also have two excerpts from Fear And Loathing In Las Vegas, credited to “Raoul Duke,” ie the psuedonym Hunter S. Thompson used for the original Rolling Stone version of the story, and another excerpt from Thompson’s Fear And Loathing On The Campaign Trail, which isn’t credited at all. This leads me to believe that rights issues prevented the publisher from crediting “Hunter S. Thompson.”

There are also some more bland features that didn’t interest me, like an overlong report on the drug scene in South Africa, as well as the occasional “psychedelic” poem. Dr. Elmo Rooney, that “wild and crazy guy” (maybe??), returns with a goofy piece on how to play music on your touch-tone phone. Finally there’s the long “Cheap Thrills” section at the end of the book, devoted to elaborate pre-internet means of entertaining yourself, like putting a glass bowl of water over a lamp or lighting a toilet roll paper and the like – complete with even letters Rolling Stone received with reader suggestions of more elaborate cheap thrills.

Overall Smokestack El Ropo’s Bedside Reader is entertaining, and certainly would be a nice nostalgic “trip” for someone who read Rolling Stone in its earliest days. I think it could’ve been better, though. It certainly would’ve benefited from the long feature Ken Kesey himself contributed to the magazine, in his search for the “Lost Pyramid” of Egypt. But I think that was published in ’74, so this book came out earlier.
Posted by Joe Kenney at 6:30 AM

I've always been straightedge (don't even drink) so I don't imagine I'd get much out of this one... but then again, I am enjoying a collection of old comics you might want to check out. https://www.amazon.com/Reefer-Madness-Jerry-Siegel/dp/1506702279/ref=sr_1_1?s=books&ie=UTF8&qid=1535376913&sr=1-1&keywords=reefer+madness+comics There's some crazy alarmist stuff in there... pretty funny.