The Man From Planet X #2: Tiger By The Tail 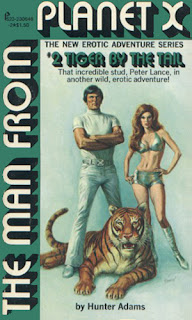 The Man From Planet X #2: Tiger By The Tail, by Hunter Adams
June, 1975  Pinnacle Books

Whereas the first volume of The Man From Planet X at least made the pretense of being a men’s adventure sort of spy-and-sex thing, this second volume drops all such pretenses and goes straight for a comedy approach. James D. Lawrence, once again serving as “Hunter Adams,” appears to already be bored with the concept “producer” Lyle Kenyon Engel has handed him – a red-skinned alien with a monstrous-sized member who has come down here to Earth to “study Earthlings,” which is shorthand for banging tons of babes. All in the name of science, of course.

Branded a “New Erotic Adventure Series” by Pinnacle, Tiger By The Tail is more akin to the goofy sleaze novels that were so common of the era, a light-hearted sexual romp that encompases both purple prose and straight-up explicit material. But even though there’s the occasional fight or chase, none of it is treated seriously and hero Peter Lance, aka Pritan Lansol of the planet Tharb, is so superheroic there’s never any question of him getting killed or even injured. I mean the dude’s super strong, hyper fast, can do all sorts of bizarre mindblowing stuff in the sack, plus he can even talk telepathically to animals. Not only that, but he’s as patient as a zen master and as polite as Mr. Rogers.

Well anyway it’s a few weeks after that previous book and ol’ Peter is heading out of New York in his station wagon(!) for another excursion into human relations, when his ESP senses detect nearby danger, right across the border in New Jersey. Turns out to be a sexy young housewife who is being threatened by a tiger on her own front yard. Peter first literally (and lamely) catches the “tiger by the tail” and tosses it, then telepathically communicates with it. The tiger is a female named Tanya, and Peter calls her off, but then some dudes with machine guns show up, gunning for the animal. Peter easily defeats them, disarming them and beating them up in the blink of an eye. Then he and the housewife repair upstairs for some casual ‘70s sex – Peter’s sexual magnetism is such that these Earthling babes immediately think of getting him bed as soon as they meet him. (I happen to have the exact opposite affect on Earthling babes.)

But Lawrence seems to have gotten sick of all the intermittent banging in the previous volume, so this time his focus is on weird gross-out stuff. We get our first indication of this when, after their quick screw, the housewife notes that Peter’s extra-long and thin member has an injury on it, Peter having been knicked there during the fight or somesuch, and insists that he clean off the wound. Anyway to cut to the chase, Peter’s dick gets stuck in the sink. It’s just one of those books, folks…then the lady’s husband shows up, and he is, naturally, a plumber, but Peter with his superhuman strength is able to pull the entire sink out of the wall as he beats a hasty retreat.

Tanya escaped from a zoo run by Velma Thorp, brunette babe with beehive hairdo who is running the place in the mysterious absence of her great white hunter father, Hugh, a former movie star. But upon his arrival at the zoo Peter is again attacked by men with machine guns, and after quickly knocking out these ones it occurs to him that perhaps they are tracking something hidden within the animal. Ultimately he will of course be proven correct; Velma reveals that her dad brought Tanya back from Russia a few months ago, and mentioned something special about her – it will develop that something has been surgically inserted in Tanya’s hide, a device which could trigger WWIII or somesuch.

Burk, who steals the novel, calls in a former sword-swallower turned porn starlet to feature in some test footage based around fairy tales in which Peter screws a bevy of gals, capping off with this sword-swallower managing to contain his entire girth in her mouth. But she turns out to be a commie spy who has something hidden up in a certain part of her anatomy, something which latches onto Peter’s dick while he’s enthusastically boffing her, to the extent that Peter’s dick swells up to crazy levels. Enter the CIA agent from the previous volume, who has been tracking this sword-swallowing spy, Fifi, and informs everyone that she’s known for this trick – cue more gross-out stuff as Fifi again has to blow Peter, but this time it’s to suck that poison out.

Along comes wealthy socialite Crystal Warrick, a blonde vixen who demands, “Take out your cock!” promptly upon meeting our hero. She’s seen the test footage, you see, and through some chicanery she’s managed to buy out the Thorp zoo so she can have a controlling interest in the jungle porn. She is now running the film, and declares that they’ll be filming in Africa, not on the zoo itself, and that further she will star in the film and Velma can co-star if she’d like – there is a simmering jealousy between the two, not that this stops them from shooting girl-on-girl scenes for the movie! But Crystal, despite coming on strong to Peter, always refrains from full-on sex with him; it later develops, in another of the novel’s many arbitrary subplots, that Crystal’s a virgin – and of course Peter takes care of that for her.

Lawrence hits all the bases, so to speak: promptly upon arrival in Nairobi Peter is being propositioned by a sexy native: “Peter’s first real contact with a black Earthling.” And boy is it a memorable first contact. Later on, Peter, realizing that Crystal is hiding things from him, decides that “A simple little rape might do the trick,” and proceeds to anal-rape her, after which a satisified Crystal declares, “Okay, I’ve taken you up the ass, I guess I may as well take you into my confidence.” There’s also a part where Burk and the film crew are lured into the jungle by a bunch of horny native gals and screw away with aplomb, not realizing it’s a trap orchestrated by the Black Death, a big guy in black robes with a leprousy-ravaged face.

Despite the amount of sex there’s nothing steamy about any of it…particularly given how Peter’s always thinking of the women as “Earthling females.” You almost sort of get the idea that Peter would be just as game to experiment with Earthling males. But the explicit material is less pronounced than last time – I mean it’s graphic and all, but many times Lawrence spends more time on the foreplay or naughty dialog, then leaves the actual “coupling” vague. This one’s also missing those cool ‘70s touches that were frequent last time, I mean who could forget Peter Lance dancing to Led Zeppelin on a quadraphonic hi-fi?

But it does go on and on, and it’s more of a lame comedy than anything; even when Peter is briefly captured by Chicoms it’s more goofy than thrilling. But Lawrence plods away, almost desperately padding the 200+ pages; there’s even an arbitrary bit where Peter gets amnesia – a subplot that lasts all of a few pages and has no bearing on anything. For those diehards who want to know “But what’s it all about?,” long story short: Hugh Thorp turns out to be an agent of top-secret CRACK, as is Crystal Warrick, and he was on a mission to capture some doomsday tech from the Reds, and hid the schematics or whatnot in that cannister which he implanted in Tanya.

All told, Tiger By The Tail was really stupid, displaying none of the cool funky sleaze Lawrence delivered for Engel in the far superior Dark Angel series. My assumption is The Man From Planet X failed to resonate with readers even in its own day, as the third and final volume didn’t appear until two years later.
Posted by Joe Kenney at 6:30 AM