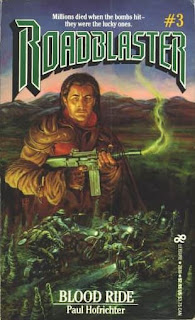 This is one of those books that makes you take a long hard look in the mirror; the kind of book that has you reflecting on your life and all the poor choices you’ve made – particularly your choice to read this book. Yes, it’s the final novel of the Roadblaster series; the surprise isn’t that the series only lasted three volumes, it’s that it actually made it this far.

It’s four whole days since the nuclear events of the first volume, which as we’ll recall precipitated such armageddon-like events as people driving around the mountains outside San Francisco and complaining about the price of gasoline. Only four days have passed, folks, and we’re like 500 pages into this “epic.” Loser “hero” Nick Stack has yet to get off his ass and head to New York to find out if his wife and kids are still alive; the poor sap is constantly getting caught up on some random assignment, eternally prevented from starting off on that cross-country journey. A journey which, if you’ll think about it, is apparently the entire friggin’ point of this stupid series, but three volumes in and the dude’s in the same exact area he started off in.

But then, it would appear that Paul Hofrichter is already bored with the series concept. Blood Ride opens, arbitrarily enough, with a flashback-dream sequence in which some older woman who lived in Stack’s apartment building many years ago has a “panic diarrhea attack” and plummets to her death from the roof of the building. I’m not making this up, friends. That’s how the damn book starts. And Nick Stack sees her falling, then wakes up to the real world and it’s post-nuke hell and will spend the rest of the novel randomly flashing back to the time he saw that lady fall off his apartment building.

There is in fact a New Agey vibe to this series, but Hofrichter takes it to new realms in the final volume…Stack is prone to lots and lots of soul-plumbing introspection, up to and including an overlong bit where he taps into the minds of crabs as they’re being boiled. There’s lots of “man’s inumanity” shit throughout Blood Ride, which of course makes the book even more of a beating to get through. Worse yet, the action, while never much of a concern for Hofrichter, is even less pronounced this time around, with basically nothing happening until the climax…a climax which, by the way, is basically a retread of the climax of the first volume.

The dialog is as soul-crushingly banal and exposition-laden as normal; when asked why he doesn’t just stay here with his new Californian friends instead of voyaging all the way to New York to find his family, Stack responds, completely serious, “I have more emotional investment in my wife and kids.” Really, Stack?! But honestly it’s like that throughout. And, like last time, the exposition isn’t just relegated to the dialog; anytime a new character is introduced, we get lots of arbitrary backstory about them, even including various sexual encounters. Oh and speaking of which, sex finally makes its return to Roadblaster, in typically bizarre fashion, but more of that anon.

Anyway the preceding installment featured the typical time-wasting development of Stack promising some injured dude that he’d try to find the dude’s family to let him know he’s okay. Keep in mind this is at the expense of Stack finally leaving for New York to find his own family. So off Stack goes with his Harley Davidson club buddies. This entails an overlong but pretty suspenseful bit where they have to scale the towering ruins of the Golden Gate Bridge, which has collapsed in the nuclear maelstrom. Even here, climbing high above the churning water, Stack finds the time to ruminate on digressive philosophical asides.

And folks we settle in for the long haul; they get to the town they seek, they ask an old guy for directions, down to the specific street intersections, and they trudge along on their quest. They find a town of inhabitants who are just sort of hanging out, drinking tepid beer that isn’t cold, due to the lack of refrigerators, due to the lack of electricity, due to the friggin’ nuclear war that just occurred a few days ago. Here the group also finds a couple who dance for the entertainment of the townsfolk: Aaron Dragon and the attractive Gina. Stack checks her out, wonders if she’s doing Aaron exclusively, and then the locals say they’ve hauled in a bunch of crabs, so let’s have a crab feast.

The long haul gets even longer now as we have this nigh-psychedelic nonsense as Stack commiserates with the poor little crabs, about to be boiled alive; he empathizes with their terror, the misery they endure before the bitter end…not that this stops him from going for seconds and thirds of crabmeat. And all this ruminating extends to your basic “man’s inhumanity” drivel that no one in their right mind would expect to encouter in a paperback “action” novel titled Blood Ride. After this everyone goes out to skinny dip and Stack comes upon Aaron and Gina “coupling” in the waves; he watches in secret, reflecting that he’s gone without a woman so long.

When Aaron goes off to “urinate” (and Hofrichter also has to inform us that Stack takes a piss, too, just in case we were concerned), Stack lingers a bit and Gina spots him. She was happy he watched and eagerly asks, “Would you like some?” Stack momentarily forgets about the wife and kids and heads on over. When he tries to slip it in, Gina says, “Not there. Put it where Aaron had it. In my ass. I can take it there. I like it that way, too.” This, she informs Stack, is “Nature’s birth control.” The sodomy goes on for a few pages, with the humorous “climax” that Gina, unbeknownst to Stack, doesn’t even get off, and after the act rushes away to “handle” herself! Our hero is such a loser, folks, that three volumes in when he finally gets a chance for sex, he doesn’t even satisfy the woman!

Oh, speaking of sleaze, we’ll recall the sleazeball bikers who were the main villians in the first volume. Well, they’re back, led by Lance Zoyas, who is the “son of a Mexican wetback.” Whereas in the first volume their prime goal was to round up preteen girls and force them to give blowjobs(!), this time these bikers are amost presented as their own famiy unit, caring for one another – hell, Zoyas and his co-leader fight back tears and hug each other when Zoyas finally returns to the fold, presumed dead after the events of the first volume. There’s another set of villains afoot, criminals led by a dude named Arnie Vastra, who actually do all the heavy lifting in the “thrilling climax” while Zoyas and his bikers watch from afar.

Stack is again used as a post-nuke courier, heading back into the mountains to reconvene with the downed B-52 crew. Along the way we get a sermon on buffalo. Seriously, we do. Here Stack gets the sad news that he won’t get to bum a ride on the plane, once it’s repaired; it will more than likely be sent on a mission to bomb Russia. Stack here finally recalls Rayisa, the preteen girl who was basically the supporting character in the first volume; that is, until she was captured in the final pages, forced to orally please a biker, and then Stack shot the dude’s dick off while it was still in Rayisa’s mouth. Not much in men’s adventure fiction can compare to that scene, friends; too bad the rest of the series never lived up to it.

Anyway Rayisa returns on page 162 of Blood Ride, having remained off-page the entirety of the previous volume; she tells Stack she wants to go with him no matter where he’s headed, thus forces herself on him for the trip to New York. He says okay and leaves; Rayisa’s in the book for like a page and a half and never seen again. And yes, that’s page 162; you’ll note that not much has happened in Blood Ride, which as you’ll note is a recurring friggin’ theme of the entire series.

The finale sort of picks things up; the nukes are being removed from the B-52 via convoy, and Arnie Vastra and crew, in stolen armored vehicles, attempt to route it, leading to a bloody firefight in which Stack again takes part. But as usual with Hofrichter, not much is resolved; Vastra fails in his attempt and escapes, and meanwhile Zoyas and his bikers, who have watched it all, try to follow the convoy but somehow lose it. So meanwhile they’re still out there, likely plotting some tomfoolery. As for Stack, he’s hanging out in a cave with another new friend, who tells Stack it’s perhaps due to the “cosmic pattern” that Stack has ended up here in California.

And that’s it, folks, it’s over! The book – and series – is over! We made it!! I hate to say it, but Roadblaster necessitates an emergency reformation of the men’s adventure tribunal which previously dealt with the abonimation that was The Penetrator #22. Paul Hofrichter has been found guilty by a jury of his men’s adventure peers for multiple counts of narrative padding, go-nowhere plot digressions, copious philosophical ponderings, bald exposition, banal dialog, buffalo sermonizing, misleading titles (both series and individual volume), misleading cover art, and one count each of nonclimactic sodomy and needless crab-boiling. Sentencing is to be carried out immediately.
Posted by Joe Kenney at 6:30 AM

Joe, we should be compensated in some way. You and I might be the only guys on the planet that read past the series debut. Like you, I unfortunately read and reviewed the whole series: http://www.paperbackwarrior.com/search/label/Roadblaster?m=0

Funny and as always great review.

You should raise your aim, read espionage or action novels with more literary content.

You should raise your aim

No! When I read a review like this - which is solid gold from beginning to end - I selfishly want Joe to read only the worst trash. I'm strictly thinking of my own entertainment! Plus it is 'Glorious Trash', after all. If Joe had a Hall of Fame tag for reviews, this would be a shoo-in.

Thanks a lot for the comments, guys!

Roadblaster is literally the worst series I've ever read in any genre.