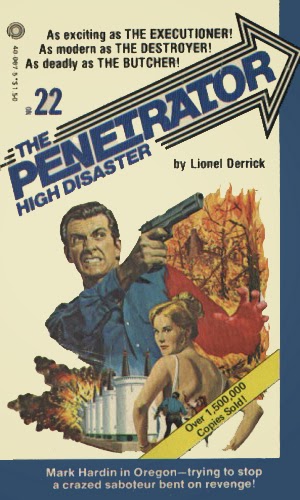 Holy boredom, Batman! This volume of The Penetrator is a total snoozefest, and author Chet Cunningham has a lot to answer for in the men’s adventure tribunal that exists in my imagination – he’s guilty of a lack of sex, action, violence, and thrills, serving up a listless plot which sees hero Mark Hardin aimlessly driving around Oregon while listening to “soft music” on the radio.

In my review of the previous volume I mentioned that High Disaster was one of the two titles in the series I didn’t have, but due to the usual obsesiveness I had to get it…but it turns out I would’ve been better off if I hadn’t. Methinks Cunningham must’ve gotten really bored with being “Lionel Derrick” around this time, and perhaps took a trip to Oregon and decided to frame it up as a Penetrator story.

What’s most unfortunate is that it starts off so well – or, at least, so fun. Spoofing the then-popular “Washington fringe benefit” tell-all books and news reports, Cunningham introduces blonde bimbo Arlene Day, who has recently outed Senator Harland W. Harrington as her pimp in all but name. In addition to boffing the senator, Arlene was also whored out to visiting notables. Now she’s come forward with her story – that is, after she’s written her tell-all book, which is about to be published.

This is all relayed via a news conference Arlene gives, where she blithely informs the newsmen (and outraged newswomen) about sex with the senator. A scene capped off by a funny bit where Arlene sheds her top “for the boys in the editing room.” It’s all goofy and fun, and sadly it’s the only entertaining moment in the entire damn novel. And plus, you might wonder what all this stuff has to do with a Penetrator novel.

Meanwhile, Mark Hardin kicks back at the Stronghold, eating raw steaks with Indian mentor David Red Eagle and badgering him with lots of un-PC dialog. The novel keeps plodding on and you have no idea what the point of it all is. Not until a drunk Senator Harrington, his political career ruined, accidentally starts a forest fire near his mountain retreat in Oregon, does High Disaster start to come together.

Harrington, a middle-aged veteran of the war, gets off royally on the destruction. He’s still senator until January, and immediately figures that he can start a wrath of destruction on his own state of Oregon, and no one will suspect him! He hates the entire state because no one came to his defense during the Arlene Day scandal. Also, he has a particular hatred of “the Indians,” because they had reservations on a lot of areas that he wanted to renovate for various business ventures.

Aided by his bodyguard, a former boxer who is loyal to the senator for clearing him of a murder rap, Harrington becomes the “Oregon Terror,” and begins his war against the state. Arson, explosions (Harrington was a demolitions expert in the army), and poisoning of the state’s water supply are the main avenues of his attack. Hardin becomes interested in the situation due to the suffering this causes Oregon’s American Indian population, and hops in his plane to fly to Oregon and kick ass.

The “Indian” motif is really ramped up this time around, with Hardin several times referred to as “the big Indian guy” by other characters. It gets to be a bit much, though Hardin does at least poke fun at himself for his newfound interest in all things Indian. But anyway, he hooks up with some Indians on a reservation in Oregon, assessing the damage caused by one of Harrington’s fires. In the destruction Hardin discovers overlooked evidence which will eventually lead him to figuring out that Harrington is the Oregon Terror.

But what a snoozefest it is! Cunningham writes endless detail of Hardin tooling around Oregon in his rented LTD, listening to “soft music” on the radio. This phrase is repeated so many times in the text that it gets funny – I mean, seriously, vast portions of High Disaster are comprised of bloodthirsty Mark “Penetrator” Hardin just driving around and listening to, I don’t know, James Taylor or something.

And even worse, we readers already know that a middle-aged senator is the villain of the piece – a villain, that is, who only has a single henchman! To say these two guys are outmatched by Hardin would be an understatement. Where’s the crazed violence and action setpieces of previous volumes? There’s nothing of the sort in High Disaster, in which Hardin is still just tooling around in the LTD while Harrington burns down half of the state, even killing several people in the process.

As usual, a female presence serves to brighten things, if only slightly; this is Maxine O’Reilly, hot blonde Oregon office secretary of Harrington, who, despite still being loyal to the man, relents to Hardin’s questioning when he enters the office and concedes that she too suspects that Harrington is the Oregon Terror. Now Hardin has a passenger who can ride around in the LTD and listen to “soft music” with him. However, Cunningham does not deliver the sex scene you figure would be mandatory, and Hardin and Maxine only maintain a working relationship.

The novel’s first action scene doesn’t happen until well over halfway through, when Hardin spends the night at that Indian reservation. Hardin patrols the grounds – and fires at a mysterious car that drives through late that night. Two black men get out, armed with Molotov cocktails, and lay down a story that they were hired by some dude to come here and torch the place. The guys are hauled off to the police station, and Hardin is certain they were hired by Harrington. Did you notice though that Hardin didn’t even kill them in the firefight? It’s like this throughout the novel, as if the violent hero of the previous volumes has been replaced by an American Indian Mister Rogers.

Apparently the state police and FBI are clueless, and only Hardin is capable of figuring out where Harrington will likely strike next: Bonneville Dam. And in fact the senator is there, having hired a few goons to help him out for the occasion. It isn’t until almost the very last page that Hardin actually kills someone, blowing away one of Harrington’s goons. And it’s his only kill of the entire novel! Otherwise the action scene here is perfunctory and bland; again, Hardin’s up against a heavyset senator and a few stooges, so there isn’t much potential for a big firefight.

And just as in his previous volume, Cunningham delivers an anticlimatic death for his villain, having Harrington, who’s been shot by Hardin, dive to his death off the dam, after informing Hardin that the entire thing’s going to blow. Hardin has seconds to defuse the bomb, including a “tense” part where he has to let the cops allow him past the barricade so he can help them. But good gravy it’s just all so boring, bland, and tepid – though we are informed that Hardin and Maxine, now that danger’s out of the way (and the novel’s about to end) are about to heat up their previously-platonic relationship.

Previous Cunningham installments have been sort of boring – in fact, a general malaise has overtaken the entire series by this point, with even co-writer Mark Roberts’s most recent book being a dud – but High Disaster takes it to a whole new low. To repeat, I should’ve skipped tracking this one down. And so should you.
Posted by Joe Kenney at 6:30 AM

Read this one over the weekend, and your take is right on target. What a snoozer of a story.