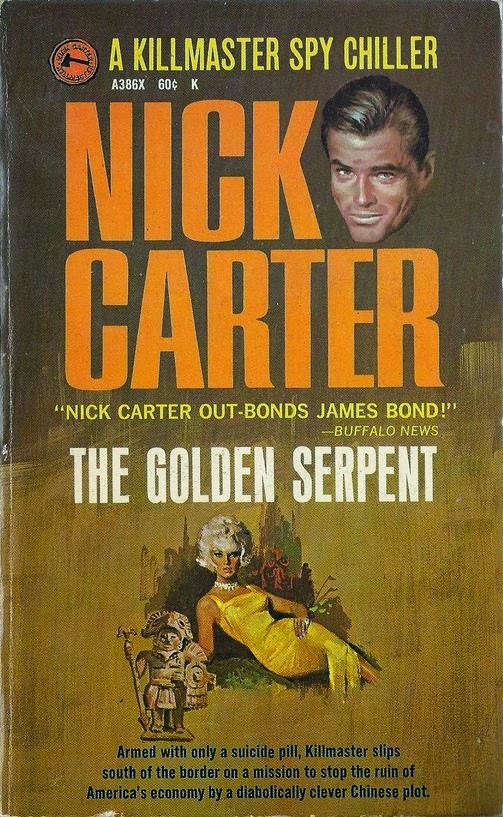 Manning Lee Stokes wrote several volumes of the Nick Carter: Killmaster series, and supposedly is the series author who came up with the idea to have the novels be narrated by Carter himself. The Golden Serpent (which is stated as taking place in 1966) predates this first-person switchover and thus is told in third person, which as I’ve mentioned too many times is the style I prefer for the men’s adventure genre.

I was eager to read this volume, given the great writeup Andreas Decker gave it in The Paperback Fanatic #17. Not only that, my friends, but in this volume Stokes serves up my favorite type of pulp villain: an actual Nazi She-Devil. He doesn’t exploit the character as much as he could, but she is a whip-wielding hussy who, in the final pages at least, dons her jackboots and swastika armband…that is, right before she engages in mortal sexual combat with the Killmaster.

But as usual Stokes puts too many plots into one book, and doesn’t focus on the Nazi She-Devil alone. In fact, the inciting incident of The Golden Serpent is soon lost; counterfeit bills are threatening to destroy the US economy. When a greedy Mexican pilot crashes his plane over the US border, inside it is found a huge stash of the false money. At length we learn this dude was employed in an actual castle deep in Mexico, a castle owned by Gerda von Rothe, famous owner of a cosmetics emporium, and despite her platinum blonde hair and staggering body, reportedly 70 years old. Also, she runs roughshod over the locals, who refer to her as “The Bitch” – which, by the way, is how Stokes usually refers to her in the narrative.

This plotline is also murked up with vague mentions of “The Serpent Party,” a sort of Mexican radical movement looking to get California and a few other states back into Mexico’s control, as well as the possibility that a few Red China nuclear subs might be patrolling the Mexican and American coastlines. But despite the too-busy plotting, all is gradually eclipsed by Gerda von Rothe, who is of course the Nazi She-Devil. It’s just unfortunate that Stokes doesn’t focus on her from the beginning and instead serves up all these counterfeit currency/Serpent Party/nuclear subs red herrings which make for the big threat that gets everything going.

Meanwhile, Nick Carter’s on vacation, getting laid. Down in Mexico himself, he’s gotten cozy with a local gal who is the daughter of some influential businessman or something. But the girl’s a virgin, and demands that Carter take her virginity; after some internal debate, Carter does. However, no doubt due to the era it was published, the sex scenes in The Golden Serpent are quite vague, leaving everything to the reader’s imagination. While I prefer the pulpier plots of the ‘60s and ‘70s installments of the Nick Carter: Killmaster series, it seems pretty clear that it was more sexually explicit in its otherwise un-pulpy ‘80s installments.

Speaking of pulp, Stokes as expected really pulps it up, to the point where it sort of gets goofy; for example, Carter is here often referred to as “Killmaster,” ie no “the.” This is just what Stokes did in the later Aquanauts series, where he referred to the main character as “Tiger Shark,” even though the guy’s name was William Martin. Also goofy is Stokes’s occasional reference to Carter as “the AXEman,” ie Carter’s employer AXE (which has since going on to making men’s hair gels and body sprays). However for the most part Stokes just refers to him as “Nick.” (And Stokes also has a knack for in-jokery, with Carter’s undercover name at one point being “Carter Manning,” and a mention of a “Miss Stokes” being the secretary of Nick’s boss, Hawk.)

But this time Carter doesn’t work for AXE; after too much setup, he’s on loan to the CIA, who friggin’ demands that Carter take a cyanide pill in one of his teeth. Also, since he’s smuggled into Mexico as a penniless gold pospector, Carter is denied his usual weapons, so there’s no Luger, stiletto, or weirdo “gas bomb” that he tapes to his balls. The CIA doesn’t think Gerda von Rothe’s castle has anything to do with the counterfeit curency, they just think the crashed pilot merely happened to be employed there, as the castle features the only airstrip in the area, and they want Carter to sort of bumble around and see what’s up.

Once Carter’s in position and playing out his drifter role, he soon begins to suspect that Gerda is in fact in on something, especially when he finds the murdered corpse of an old SS Nazi buried in the lake beside his shack. When Gerda herself shows up, the book picks up gear. She is of course stunningly gorgeous, with a body to match: a “tall woman with enormous firm breasts and an incredibly small waist.” Catching Carter in the act of bathing in the lake, the lady duly checks out his body and then tells him she wants to hire him for a special job.

Before Carter can meet her in her castle, he’s waylaid by agents of El Tigre, a Mexican bandit who works with the CIA and is pissed at them for not holding up to their various promises. This is more page-filling stuff, and not very interesting, other than El Tigre’s fondness for drinking mescal, which he also forces Carter to quaff. Even worse, when Carter finally gets to the Castle, Stokes completely skips over Gerda’s all-night employment of Carter’s sexual services, though we’re informed she’s insatiable and, of course, perverted.

In many ways The Golden Serpent is almost identical to the books Stokes would later write for the Richard Blade series. Carter, just like Blade, comes nude and confused into a twisted world of in-fighting, perversion, and murder. Gerda is just like the various hot-bodied and barely-clothed chicks Blade meets on his random hoppings around Dimension X, a coldly calculating man-eater who could very likely plunge a dagger in Carter’s back while he’s on top of her. And just like in those Richard Blade novels Carter here finds himself in the midst of genuine castle intrigue, with Gerda plotting against two men who have taken over the place and hiring Carter to kill them.

These two are Harper and Hurtada, the former an American who does the public relations for Gerda’s cosmetics empire, the latter a “Red Chinese” who has disguised himself as a Mexican. Stokes doesn’t really do too much to bring these guys to life, but apparently Harper is a KGB informant and Hurtada, obviously, is with the submarines that are patrolling the coastlines. And also apparently the Serpent Party is all a cover for the Red Chinese, and the counterfeit currency was one of their plots – it’s eventually revealed that Gerda’s mother smuggled the printing plates over to Mexico, after WWII, but they were useless until the Chinese provided the paper.

But really, all of this stuff is brushed aside and more focus is placed on Carter’s escape from Gerda. Stokes piles on the gothic stuff with Carter discovering the rat-eaten remains of the previous men who “serviced” Gerda, hidden deep in the bowels of the castle. There’s a climactic firefight that you don’t even realize is a climactic firefight, as Gerda’s uniformed castle guards take on the Red Chinese soldiers who have taken over the place, and Carter is caught in the middle. It’s nonetheless a good action scene that, while never too gory, at least adds more pulpy charm with Carter like some sort of superhero or something, who can “become Killmaster” when necessary.

The best is saved for last. Carter gets captured and is stripped naked and tied to a bed, where he’s whipped by Erma, Gerda’s female bodyguard who is apparently built like “a linebacker for the Green Bay Packers.” In this climactic section Gerda has, per Carter, shown her “true colors,” wearing her jackboots, black shirt (unbuttoned to the navel, so as to show off her breasts, naturally), and swastika armband. She even throws in a “Heil Hitler.” Given the old saw familiar from so many James Bond movies, Gerda blithely tells Carter anything he wants to know, given that, of course, he’ll be dead soon.

And of course the supernatural element is lost, as Gerda turns out to merely be 36, the whole “70-year-old” thing something dreamt up by PR man Harper. She is though rather randy, and Carter himself, despite the savage whipping, finds himself reacting to her beauty. Here Stokes delivers a finale that, as Andy Decker referred to it, is in “the top ten of pulp.” Stripping off her own clothes, Gerda cuts Carter loose and informs him he will have sex with her one more time – all while Erma sits watching, holding a submachine gun!

While it never gets very explicit, it’s still all very well-done, and as entertaining as anything I’ve ever read by Stokes, as Carter, “always at least two steps ahead,” satiates Gerda’s sexual needs while tonguing open the cap of his false toose and prying free that cyanide pill the CIA insisted he carry on the mission. Certainly one of the very few scenes you’ll ever read that features the hero fucking the villainess while trying to french kiss her with a deadly cyanide pill!

Stokes only proceeds to ramp it up, with Carter next in a knockdown, dragout fight with Erma, who nearly beats the shit out of him, including a memorable bit where she attempts to strangle him with one of her pig-tails. And as if all that wasn’t enough, Stokes even tosses in a bit of necrophilia, when El Tigre arrives in the aftermath of the battle, helps an injured Carter escape, and then carries out his oft-stated desire to rape “The Bitch” – even if she’s dead!

It took too long to get going – way too much time was spent on developing Carter’s cover story as a gold prospector – and had too many divergent, unsatisfactorily-resolved subplots, but The Golden Serpent was still a fun read, and definitely got better and better as it went along, culminating in one of the best climaxes I’ve ever read. I look forward to reading more of Stokes’s contributions to the series.

And special mention must be made of the UK Mayflower Books edition, the cover for which can be summed up in two words: Hot damn!! 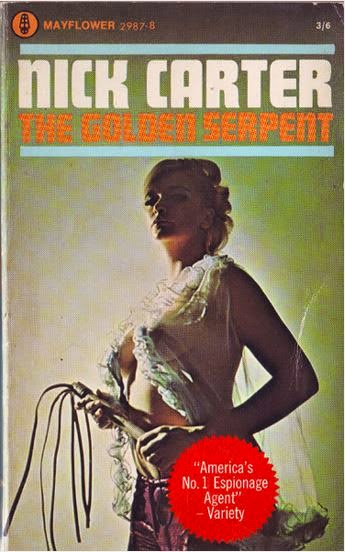 Great review. For me, it's one of those books where you remember when and where you bought it and read it. The lethal French kiss has always been the scene I remember when I see anything about the book.

The "lethal French kiss" makes me think of a made-for-cable spy movie called MAX KNIGHT (probably meant to be a pilot). It manages to be very campy and at the same time more violent than many spy stories that AREN'T campy, including a villainess with a "lethal kiss" who ends up getting killed by it herself.

You can check out more covers here. http://suspenseandmystery.blogspot.com/2014/06/the-golden-serpent-revised-by-manning.html