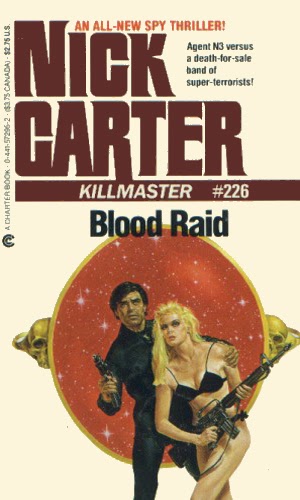 Sporting an awesome if misleading cover (unfortunately, there is no M-16-toting punk rocker chick in the novel), Blood Raid is indicative of the type of novels the Nick Carter: Killmaster series put out late in its run, with a vibe that strays for realism, a lack of action, and a focus on globe-hopping espionage.

Author Jack Canon, who earlier wrote the much-pulpier installment The Satan Trap, goes for a Fleming or rather Robert Ludlum feel, with cynical, world-weary Nick Carter jumping around the Middle East, Europe, and Africa as he hunts down a secret murder cult called The One Hundred Eyes. The “Killmaster” doesn’t even live up to his name until the final quarter, for the most part using his espionage contacts and his wits instead of his various weapons.

The series is back to third-person narration here, which allows Canon to hopscotch around a group of characters. Blood Raid somewhat reminds me of the work of Dan Schmidt, with its terrorist villains, stoic protagonist, and busy plotting, but Canon’s novel moves more smoothly – though it also has a lot less action, so there’s good and bad. At any rate, the novel plays it straight throughout, which is a shame when you consider that this time Carter goes up against a cult of murderers who operate out of a secret hideout in the caves of Niger.

Carter is already on the mission when the novel opens, and his boss David Hawk doesn’t even appear. Terrorists who are looking to “defect” to the West are turning up dead, murdered cult style, usually strangled, and their bodies mutilated. Researching this, Carter hooks up with gorgeous and famous newsreporter Noreen Parris, who meets Carter in Bahrain with some intel she has come upon. Noreen has been known since the ‘70s as the source for info about the terrorist world, but Carter distrusts her throughout, as he knows the lady will keep info for herself so as to get headlines.

Carter is not the same character as he was in previous novels. In fact he’s almost Ryker-esque in Canon’s hands, brusque, rude, and arrogant – he refers to himself as “a very bad-ass spook” when he meets Noreen. He’s not very human throughout, coming off like a cipher, which is likely yet another attempt at realism on Canon’s part, as I guess this is what a real-life spy would probably be like. Most surprisingly, he’s also not concerned with sex at all, coming on like a prick to Noreen, despite her attractiveness, demanding that she does what he tells her to do, when he tells her to do it.

Noreen has come across the info on The One Hundred Eyes, a previously-unknown mystery sect run by Ali-Din Muhammed, the “Grand Vizier” of the order. They supposedly operate out of the mountain ranges of Niger and their goal is the unification of Africa. It all sounds pretty cool, and definitely inspired by the tales of The Old Man of the Mountain, but unbelievably Canon does little to exploit the plot he himself has come up with; Carter doesn’t even make it to the hidden stronghold until the final few pages of the book, and the rest of the narrative comes off like a bland Cold War spy thriller.

The novel mostly reminds me of Schmidt’s work due to an overlong subplot about a KGB informat named Bal-Sakiet who is looking to defect in Oman; Carter has nothing to do with any of this, and you wonder why so much space is being devoted to it. But it develops that Bal-Sakiet is also on the target list of The One Hundred Eyes. It’s also this guy’s death that lets Carter know the Russians are in on it, or at least are trying to cover their tracks.

Noreen Parris has gotten hold of a ring used by members of the cult; like that shown on the cover, it’s a bloodstone that has embossed stars beneath it. Carter is certain it’s a cipher. All they need is a code book, but by the time Carter gets it, Noreen has already taken off. Carter is waylaid by the Russians, lead by Major General Mock, a KGB agent who has apparently had run-ins with Carter before (in particular there’s a reference to a “Cyclops” caper). Mock offers Carter full KGB support, as Mock also wants The One Hundred Eyes put to a stop, even if the Soviet command isn’t concerned about them.

Carter, with the aid of KGB agents, goes next to Cyprus, where Noreen has fled. Here we have the first hinting of sex in the novel, as the beautiful woman who owns the house Noreen is staying in makes her interest in Carter clear. But “Agent N3” is so focused on the job that he doesn’t care. With the ring and code book united, Carter and Noreen go to Milan, where Carter employs a KGB cipher expert to break the code.

The Robert Ludlum Lite stuff continues, as a drunk British agent who skips in and out of the narrative arrives to tell Carter that he’s being followed by Jacob Barassa, “a huge black man” who is one of the top assassins in the world, and likely a member of The One Hundred Eyes. This sequence plays out during an opera, but once again Carter does not get in a fight and basically just walks around outside of the opera and then comes back and discovers the British agent’s corpse.

Suddenly, with no explanation to the reader why, Carter decides he’s going to put together a Mission: Impossible type of team. Now Mock’s KGB resources are pooled toward finding this group of underworld misfits that Carter for whatever reason needs: Trig Muldane, an SAS commando, Ace Hardy, a radio expert, and Jim Rowland, a sailor. But they’re spread all over the Mediterranean and the coast of North Africa, and Carter really racks up the air miles to find them.

And of course, Carter and Noreen find the time to heat up their relationship. Throughout the novel Canon reminds us that Noreen is hot stuff, usually sitting around nude when Carter comes back to their hotel room. But it takes Carter almost the entire novel to remember that he always screws the main female character in each book. The eventual sex scene is pretty explicit, and further evidence that the later books in the series were a lot more graphic than the earlier ones – but again, the earlier ones appear to be more entertaining. So I guess it's a tradeoff!

The One Hundred Eyes stay in contact via broadcasts to secret radio stations in North Africa, and here finally the novel ramps up the tension, as Carter’s team – after a much too long bit where they break Jim Rowland out of prison – stages an assault on one of these secret radio bases. Here, finally, 170 pages into the book, the “Killmaster” actually kills someone. And it’s all very ‘80s action style, with the commando team blitzing everyone with assault rifles and such.

Also, Carter’s plan is finally explained: Ace Hardy, taking over the appropriated radio base, awaits the next Hundred Eyes transmission, so he can track its source. Then, posing as “businessmen” on Rowland’s yacht, they tool around as part of their cover (okay, this part lost me). Anyway, long story short, the novel finally delivers the stuff we’ve been expecting on page 184 (of a 191 page book!!), as Carter and team stage a raid on the secret cavern headquarters of The One Hundred Eyes in Niger.

Talk about underkill! The action is over before you even realize it, and there’s no depth or elaboration to any of it. Even the send-off for the outed leader of the cult, a man named Hajib Tutambe (aka “Ali Din-Muhammed”), who got his start as Idi Amen’s top sadist, is anticlimatic, with a short gunfight between him and Carter. But for the most part, Carter and Trig Muldane just plant explosives deep in the cave, and then rush out, shooting a few people. The place explodes, and so long One Hundred Eyes!

This is the second of Canon’s Nick Carter novels I’ve read, and I have to say, it’s the second one that’s fallen a little flat. It blows my mind that such a pulpy concept could be played out so tepidly, so “realistically,” and once again I have to wonder what a more gifted pulpist like Manning Lee Stokes could’ve done with it.

Oh, and Merry Christmas!
Posted by Joe Kenney at 6:30 AM

What I read of the Canon/Garside/Hagberg years, Carter's last leg, didn't leave a strong impression on me. At this point, the secret agent had fallen out of favor on the market. Bond had descended into self-parody, and spy novels were either historicals or becoming ever more elaborate or "realistic". This wasn't Carter's neighbourhood.

So the bad guy's name is "Aladdin Mohammed"? Might as well have named him "Al-Badghai" :|

I do believe that cover is by Jim Starlin which makes this a highly collectable issue for Starlin's fans. Nice post, I love the Nick Carter books.

It's George Gross rather than Starlin. Can see the similarity to Starlin but the original art is for sale and it's signed by Gross.

Thanks Alan, that's fascinating and something I never would have guessed. I appreciate the clarification!