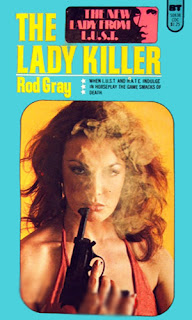 The Lady From L.U.S.T. was another of those ‘60s spy paperback series that was packaged as sleaze but was really just goofy satire. I’ve tried reading these types of books before (M.O.T.H.E.R. Versus Mafia by Rosemary Santini, one of Clyde Allison’s Man From Sadisto books, etc) and they just fell flat for me; too much focus on ridiculous acronyms, character names, and plots, and too little focus on action, suspense, or thrills. In short, these books kind of suck, just light-hearted spy spoofs that aren’t funny.

The Lady From L.U.S.T. series was likely no different, but the books in this series go for stupid prices these days; apparently Gardner Fox served under the house name of “Rod Grey” for the majority (all?) of the 18 installments from the series inception in 1967 to its end in 1973. Two years later Belmont Tower brought the series back, this time as The New Lady From L.U.S.T., and it ran for two years, amounting to seven volumes. The Rod Gray house name was once again used, but apparently Gardner Fox wasn’t the writer this time. I’m guessing it was a revolving door of ghostwriters, and it’s only a fluke – actually, my own sad over-familiriaty with trash fiction – that led me to discovering who wrote this particular volume.

That being said, the series, at least judging from this entry, is still pretty lame. The Lady Killer is not much of a spy novel, even comparitively speaking; it’s more along the lines of a private eye novel. Hell, protagonist/narrator Eve Drum is even made a temporary detective in New York City during the course of her investigation. Eve is a gorgeous blonde with a brick shithouse bod (she kindly gives us her measurements on the first page) and she lives in a penthouse in Manhattan where she poses as a worldly, well-to-do socialite. All very much like Cherry Delight, of course, and in many ways The Lady Killer is very similar to Len Levinson’s contribution to that series.

Eve works for top-secret spy organization L.U.S.T., and per the back cover her archenemy is the evil organization H.A.T.E., which not only plays on the SPECTRE deal but also is yet another indication of the unfortunate focus on punny acronyms these spy spoofs were known for. Now, H.A.T.E. is namedropped on the back cover, but the dudes don’t even really show up until the final page. Instead, The Lady Killer is an Agathie Christie-type deal where four doctors who have invented a new, stronger form of methadone are being killed off one by one by a sadistic redheaded female assassin. Eve Drum must figure out who is behind the plot and how to stop further killings.

The first few chapters alternate between Eve’s humdrum narration – her life in Manhattan, her casual sex affair with boss David Anderzanian, her current paramour Mac Morris, a famous mystery novelist – and third-person chapters in which an attractive redhead named Jobeena goes out on assassination missions. This alternating viewpoint stuff, particularly with the skewed viewpoint of the clearly-disturbed female villain, was the first element that started nagging at the ol’ memory banks – I was certain I’d read something almost identical to this before. As the book progressed, with Eve using her wits and beauty rather than weapons or karate, and particularly with Eve coming to the conclusion that the redhead was getting revenge for something that happened in the past, it all gradually came to me.

My friends, this is the exact same plot J.C. Conaway gave us in Deadlier Than The Male. It’s even written identically (save for the fact that Deadlier Than The Male is in third-person throughout), with the alternating viewpoints and the gradual reveal that something rotten happened on a college campus several years before, something which is now causing rampant death. It’s basically the same novel J.C. Conaway delivered two years later, once again via Belmont Tower Books.

At this point I did some deep Google diving and enjoyed one of my rare moments of vindication: according to the 1975 Catalog of Copyright Entries, The Lady Killer was indeed written by J.C. “Jim” Conaway.

As with that later Jana Blake novel, The Lady Killer is a slow-moving affair that’s more concerned with detailing the mundanities of the heroine’s high-society life while sleazing things up every once in a while with visits to New York’s more sordid establishments. You know it’s a ‘70s Belmont Tower book when the first murder takes place in a massage parlor, and Conaway brings the place to such grungy life that you suspect he might’ve visited a few such parlors for “research.” A later kill takes place in a gay nightclub called The Tubs which again has the same sort of over-the-top debauched vibe as the disco club in Deadlier Than The Male (where a murder was committed, as well).

And like Jana Blake, Eve isn’t an ass-kicking protagonist by any means. In the course of the 160-some pages of the novel she chops one dude in the throat and, in the very final pages, shoots two H.A.T.E. guys in the shoulder. She’s more in the brains department, but it’s not like this case is a puzzler. As mentioned Eve learns that these four doctors were pals in Harvard over a decade ago, where something mysterious happened. Eve’s certain that whatever it was is what’s causing these murders today. In yet another prefigure of Deadlier Than The Male, no one but Eve believes this theory, particularly the gruff New York detective who is working the case (yep, just like in Deadlier Than The Male).

While Eve isn’t much for the fighting, she’s quite capable in the lovin’ department, bedding her boss David, her boyfriend Mac, and a muscle-bound club bouncer. Each sequence runs a few paragraphs and leaves nothing to the imagination, though yet here again we have that strange conundrum where a male writer delivers hardcore sex scenes from a female character’s point of view. The scenes don’t go on very long, though, yet coupled with the massage parlor and gay nightclub stuff it all lends the novel an overall sleazy feel, which is again typical of every Conaway book I’ve yet read.

One difference between this and Deadlier Than The Male is that Eve, suprisingly, does not boff the studly detective she works the case with, though Conaway gives a few intimations that they might before he apparently forgets all about it. Rather, more time is given to Serena, a teenaged Gypsy girl who had a hardscrabble youth and now, at seventeen, works in the massage parlor in which the first murder occurs. Eve pities the young girl and actually takes her home with her (Serena’s lecherous boss at the massage parlor is the recipient of Eve’s karate chop), giving her nice clothes and eventually hooking her up with a job as a typist at L.U.S.T. HQ in Manhattan. (The novel features a “several months later” epilogue in which we learn that Serena has gotten married…to Eve’s boyfriend Mac Morris!)

It turns out that redhead assassin Jobeena was raped as a young Radcliff student a decade ago by those four Harvard doctors, and somehow H.A.T.E., wanting now to steal the secrets of their new drug and sell it to the commies, got wind of her sad plight and hired her as an assassin. Or something! Jobeena actually takes out three of the doctors (the third one she strangles with his blood pressure monitor) before Eve figures out what’s going on. However Eve herself is quickly caught by Jobeena, who delivers on her promise to H.A.T.E. by handing them Eve Drum on a veritable silver platter.

Things look bad for our heroine, but Conaway delivers another of his cheesy copout finales with the appearance of a little boy who lives in Jobeena’s building and who just happens to be going by the window of the cellar Eve and Serena are captive in. Eve gets the kid to come in and tells them they’re play-acting as spies and the kid unties them! Then Eve karate-chops Jobeena (who is eventually arrested and sent to an insane asylum), shoots a few of the H.A.T.E. dudes (not killing them), and that’s that.

So yeah, this was a pretty unsatisfying read, filled with mundane, expository dialog and boring snatches of non-action, salvaged only by brief flashes of sleaze – which pretty much describes every other novel I’ve read by J.C. Conaway!
Posted by Joe Kenney at 6:30 AM

Random observation on this, one of my favorite blogs: the worse the book, the more entertaining the review!

Thanks, Stephen, glad you enjoyed the review!

I agree with Stephen.

I've never enjoyed tiresome parodies. LOXFINGER was a book I could never make it through.