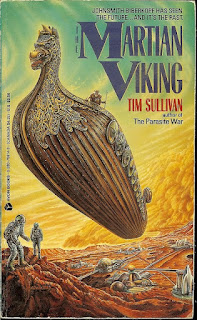 The Martian Viking, by Tim Sullivan
May, 1991 Avon Books

The concept of this novel sounded too good to pass up – a Classics professor of 2070 or thereabouts is banned to a penal colony on Mars, where he gets hooked on psychedelic drugs that give him visions of ancient Vikings that surf the cosmos on their battle ships! It’s all very Philip K. Dick (whom author Sullivan even thanks in the dedication), combined with a definite sort of late ‘60s radical feel…I mean, there’s even a Patty Hearst analog here.

I get the feeling Sullivan must’ve seen the (awesome) 1990 film version of PK Dick’s Total Recall, which subdued Dick’s philosophies and replaced them with prime-era Arnold and Verhovian gore (not to mention triple-breasted mutant gals), and figured to himself, “Hey, I should do my own version of this, only more faithful to reality-questioning spirit of Dick’s original, a-and I’ll add lots of drugs! And vikings!” And somehow he pulled it off – this breezy novel, not even 300 pages, has all the signs of a late ‘60s slice of psychedelic sci-fi.

But the debt to PK Dick’s work is strongest; Sullivan even replicates the goofy names Dick would give his characters. To wit, our hero is Johnsmith Biberkopf, a professor of the Classics living in the Conglom world of the future, where Big Brother has taken over good and proper. Johnsmith actually reads the Classics, much to the puzzlement of his fellows. But such radical thinking raises eyebrows, and soon enough Johnsmith finds himself without a job – which is against the law in this grim future, one punishable by banishment, usually to the moon.

Johnsmith has also been left by his wife Ronindella, a thoroughly unlikable character who does nothing but instill reader animosity. Perhaps the biggest question is why a nice guy like Johnsmith would even get involved with her in the first place, but this is one of the many questions Sullivan leaves unanswered. Anyway, Ronindella, who wants more out of life, has contrived to get Johnsmith fired from his job so he can get banned to the lunar minepits, where Ronindella will be able to cushily live off of half of Johnsmith’s ensuing paychecks. Oh, and she’s secretly sleeping with Johnsmith’s best friend.

For a bit of a brighter note, there’s Smitty, Johnsmith’s 9 year-old son, who looks up to his dad and of course doesn’t want him to be banned to the moon. But Johnsmith has no choice and, the night before he’s to appear before a committee for his official banishment, he indulges in some illegal “onees” (pronounced “one-nees,” the narrative would imply): psychedelic drugs which look like ball bearings. Hold one of them and you’re off on a trip; hold three and you’re in another world.

Johnsmith, for his first time out, holds all three at once and suddenly finds himself in an ocean, a massive Viking ship coming at him. Johnsmith, who has a special fondness for Beowulf, spends the novel wondering if they’re really Geats – since he’s a professor he’s given to such pedantic concerns.

Another thing never properly explained is that Johnsmith is banned to Mars instead of the moon – actually, a better fate, as the Mars colony has it easy compared to the lot of prisoners on the moon. Along with him go Alderice, a heavyset gay black man who was actually employed as a government tail on Johnsmith, but who was so bad at his job that he too was fired, and Felica, the aforementioned Patty Hearst type, a radical devoted to ousting the Conglom, who in reality is the daughter of a mega-wealthy family and who was kidnapped by some anarchists and eventually turned over to their side.

The characters are basicaly two-dimensional, even Johnsmith himself. My assumption is that this is just due to the fact that Sullivan intends The Martian Viking as satire. There’s a lot of material in this book, a lot of subplots and characters, and a vast world with a history that’s untapped. What I mean to say is, the novel easily could’ve been twice its length, and this is both a strength and a weakness. I guess it’s a sign of the novel’s quality that I wished there was more of it.

Anyway, Johnsmith finally arrives on Mars, where he lives in a military complex overseen by the cliched sort of lieutenant you’d expect, who rules the prisoners with a steel fist. Johnsmith and his two friends (Felicia though soon becomes more than a friend) assume they’re here to help in the agricultural projects going on, terraforming the planet for eventual human colonization, but first they’re put through army training, firing guns and laser weapons and etc. Turns out there are “Arkies” here, aka anarchists, who rebel against the Conglom and attack the military base. How these Arkies got here is yet another unanswered question.

Eventually Johnsmith is told his true reason for being here – he’s supposed to take onees in a sort of controlled experiment. Turns out onees are developed here on Mars; some of them have been “archecoded” to give the Viking ship visions, and the government wants to find out how it’s happening. Gradually Johnsmith will learn that it’s the work of the Arkies, who have an insider agent who archecodes the onees as they are made; the Arkies, beyond their political beliefs, are also psuedo-religious, and believe the “Great Ship” will soon be coming to Mars to deliver them all. You guessed it – the Ship is the Viking ship Johnsmith and others see in their onee trips.

There’s more besides. Sullivan works in an elaborate subplot back on earth featuring the loathsome Ronindella and her manipulating of Johnsmith’s former best friend. There’s also another subplot about Johnsmith’s pal getting advice from a “cyber-therapist” (Madame Psychosis), and his goofy plot to get Ronindella away from what passes in this goofy future as the Christian church. All of this stuff had nothing to do with anything and just got annoying, mostly because the characters here were so self-involved and despicable.

The material on Mars is more interesting, and Sullivan keeps it moving, with Johnsmith caught up in an attack on the Arkie base, where he discovers who is the insider archecoding the onees; it’s a fellow prisoner, an attractive woman named Frankie, who too soon becomes involved with Johnsmith. Pretty soon Johnsmith is caught up in her plans to escape – plus there’s an Arkee deserter who stumbles onto the military complex, proclaiming that the Great Ship is soon to arrive. In fact, it might just appear at the site of the old Viking rover which trundled across Mars nearly a hundred years before, in 1976. Hmm...

Everything comes to a head with both Smitty and Ronindella on Mars (Smitty won a ticket for two there in an utter piece of deus ex machina), Johnsmith, Frankie, Alderice, and Felicia escaping, and the Vikings appearing in a sort of celestial whirlpool, sucking both Johnsmith and Smitty up into it so that pretty soon they’re traveling about the cosmos on the Viking ship, fighting sea monsters (!), before a strange sort of “was it all a dream?” kind of ending that seems tacked one because Sullivan couldn’t figure where else to go.

But then, the clues are there all along, and it’s not like Sullivan goes out of his way to make it subtle – one could easily see the entire book as nothing more than an onee trip on Johnsmith’s part. This is even hinted at in the finale, when Johnsmith finds himself on some barren plain, talking to his deceased father. To me the most interesting thing here is how the end of the novel prefrigures the sucktastic finale of the overpraised Lost series, with our hero not only finding himself in limbo, but also being given the scoop by the ghost of his father. And hell, the Arkies themselves come off very much like the Others on Lost, all of which makes me wonder if Sullivan ever watched that show and grit his teeth in rage.

Sullivan’s writing though is pretty good. The characters as stated don’t have much depth, and the goofy names get annoying (not to mention Sullivan’s strange decision to give two of his main female characters names that begin with an “F” – but then, that might be another clue that all of this is the product of Johnsmith’s limited imagination).

The action scenes aren’t very violent, and beyond the occasional curse word the novel’s almost prudish…save for an unexpected and somewhat-graphic sex scene late in the game, when Johnsmith beds Frankie – who, by the way, turns out to be more of a Conglom-fighting radical than Felicia ever could be. (Felicia herself meanwhile sort of drops into the background of the narrative...more sign that all of this is the product of Johnsmith’s hallucenogenic delusions, or just Sullivan’s inability to juggle all of his characters and plots?)

Sadly, the psychedelic stuff goes away as the novel proceeds, and despite being sent to Mars to test onees, we hardly get any more scenes of a drugged-out Johnsmith. However there’s a definite lysergic haze to the novel, particularly as it approaches its freeform ending, which takes it into the outer limits of fantasia. The reader expecting a pat ending will be frustrated, as Sullivan goes for more of a “Bobby in the shower” type of a Dallas ending. But really, such endings are never satisfactory for readers who have invested themselves in a novel.
Posted by Joe Kenney at 6:30 AM

I love your blog.. very nice colors & theme. Did you create this website yourself or did you hire someone to do it for you? Plz reply back as I'm looking to create my own blog and would like to know wheere u got this from. thanks.
travesti

Travesti, thanks for the comment. The theme (including colors) of this blog is just one of the choices Blogger gives you when you create a blog -- at least, this was one of the available choices when I created the blog back in June 2010. Blogger has gone through a significant interface overhaul since then, though (a terrible and unecessary overhaul, as far as I'm concerned), so I'm not sure if this particular template is still available.