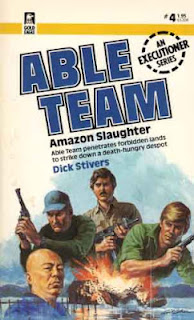 It’s been too long since I’ve returned to the work of GH Frost. His contribution to the Able Team series, #8: Army of Devils, is one of the best pieces of action pulp ever, a tour de force of madness and gore, up there with the Phoenix saga. Amazon Slaughter at times approaches that unhinged level, but not quite. It more than makes up for it with the high-quality level of Frost’s writing, which again is leagues above the genre norm.

The copyright page credits the book to “CJ Shiao,” but Frost acknowledges it as his own on his website. I think Frost, again working under an alias (“LR Payne”) also wrote the first and third volumes of the series (I don’t believe he wrote the second one, though – that was Norman Winski), but I haven’t read them. At any rate this fourth volume ushered in an unbroken set of installments Frost turned in for the series, though apparently he was removed from it; his comments on his blog and also those he left on my review for Army of Devils suggest that he didn’t quite get along with Gold Eagle.

Frost’s comments make it sound that GE was unhappy with his work, or at least the direction he was taking with the characters. This is just more indication that Gold Eagle never understood quality men’s adventure and just wanted to churn out the same old “terrorist of the month” shit…and more indication why you’d have to pay me to read the majority of the books they’ve published. Anyway, that has nothing to do with the book at hand, which is a piece of quality men’s adventure.

The Able Team trio (Carl Lyons, Gadgets Schwartz, and Pol Balancales) are sent down into the Amazon due to recent evidence of a plutonium factory somewhere in the jungle, in an uncharted region of the map claimed by Bolivia. We readers know that the factory is under the control of Wei Ho (fetchingly named “Death incarnate” on the back cover), a Chinese warlord who employs a Khmer Rogue assassin as his security chief, as well as an army of mercenaries from around the world.

Wei Ho’s army ransacks the native Indian population (the Xavante), decimating entire villages. They kidnap the healthy and force them to work at the plutonium plant, which itself is a death sentence, as every Indian they’ve forced into bondage has died from working around the plutonium. All of which is to say that there’s a lot of death and bloodshed and misery going on here, and Frost really builds it up, showing the horrors of the Xavante in gruesome and excruciating detail.

Able Team is quickly on the scene, voyaging down into the jungle where they hook up with a group of Xavante warrirors. I believe this must’ve been the introduction of the Atchisson assault shotgun to the series, as Lyons has one and must explain it to his comrades. As is customary there’s a lot of witty banter between the trio, with lots of ragging and good-natured putdowns.

Even better there’s a touch of the psychedelic, when Lyons smokes some sort of substance with the Xavante. Pretty soon he’s gone native, painting himself in the black goup the Xavante make from genipap, covering themselves in it to ward off insects and to mask themselves with the terrain. Lyon’s mind is somewhat blown, and more banter ensues as Pol and Gadgets try to determine how gone he really is.

A goodly portion of the novel in fact is given over to Able Team working with the Xavante as they journey deeper into the Amazon. There are a few firefights here and there, most notably one in which they attack a group of mercenaries while they’re hauling around prisoners. One of the escaped prisoners is a young Brazilian army lieutenant named Silveres, who after initial hostility starts to help the team.

Action scenes are rendered very well, even if none of them have the savagery of Army of Devils. Frost is really good at getting you in the heads of his characters, for example Silveres as he volunteers to swim off alone through piranha-infested waters to sneak attack a ship filled with Khmer Rogue and turncoat Brazilian soldiers.

Strangely we get Wei Ho’s backstory toward the very end of the novel, as Able Team receives intel on his history. While this chapter is enjoyable, documenting how Wei Ho turned his family’s drug and crime business into an empire, blackmailing powerful communists in China, it just seems so out of place this late in the game. Even stranger is that Wei is so quickly brushed off in the last pages of the book, not nearly given the villain’s farewell you’d expect of such an evil character.

And for that matter, the finale itself is rushed. Two of Wei’s top henchmen just disappear from the narrative, and instead Able Team and the Xavante launch a dawn raid on the mercenary camp. Again, it’s a gory scene, with lots of heads exploding and guts spilling, but still nothing on the level of Frost’s later masterpiece. And again unlike Army of Devils, Amazon Slaughter just rushes to a conclusion. There’s no wrapup or even any real resolution, just a bunch of dead Cambodians and mercenaries. It’s as if Gold Eagle lost some of the pages of Frost’s manuscript during the printing process.

But for all that it was still an enjoyable book. The rapport of the team really sets this series apart from others, with the Able Team guys coming off like the soldiers in Gustav Hasford’s Short Timers, ribbing each other with that same sort of dark and morbid sense of humor. Frost returned with the next installment, Cairo Countdown, even though it too was credited to another author (Paul Hoffrichter). I’ll be reading that one next.
Posted by Joe Kenney at 6:30 AM

For me, these mid-single digits Able Teams are the golden age of the series. I read 4-8 back in junior high and have now re-read them a couple of times. Amazon Slaughter, Cairo Countdown, and Army of Devils are probably my favorite Gold Eagle titles, period, perhaps with the inclusion of the first Stony Man Doctrine mega-novel.

High points here: I think it's the first time either the auto-shotgun, or Lyons' modified .45 M1911 appears, which makes me happy. His "going native" scenes, especially the eating of the "cream of chicken soup" grubs and the use of that insect repellant the natives use.

All in all, a pretty solid story. Knowing that you're going for #5 soon, I think you'll be in for a real treat.

After watching the 1984 season 3 ep. of A-Team a bend in the river which the team goes after nazis in the Amazon with a nuke reactor, I suspected that the writers of the ep. probalby read Amazon Slaughter.

Amazon slaughter is one of my faves, and one of the best actions in any Able Team book.

I like the interplay of characters...very funny lines...in Rain of Doom, Able Team puts out a fake news claiming that the COWBOY JIHAD blasted the terrorist bases in the Bekaa.

In warlord of Aztlan, gadgets comments on the neo nazis trying to set up a base in Guatemala...the SIEG HEIL BOOGIE

I have #12, Deathbites. I thought the computer conspiracy premise would be interesting. I lost interest near the beginning of the book as it was just one long battle. I may have to go back and try again, though.