Slaves Of The Empire #1: Barba The Slaver 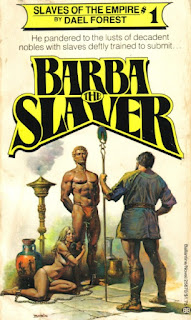 Slaves Of The Empire #1: Barba The Slaver, by Dael Forest
August, 1978 Ballantine Books

This was the start of a five-volume series, originally published in the UK in 1975, which takes place during some unspecified time in the Roman Empire. The author, Stephen Frances posing as “Dael Forest,” namedrops a few people here and there: Poppaea for one is often mentioned, but it’s never stated if in fact this is the same woman who was Nero’s Empress of Rome (or, for that matter, Poppea the Elder). And one of the protagonists is named Hadrian, but it’s certainly not the future emperor. So there's no way to exactly pinpoint when it all takes place.

Five young siblings from Briton are taken captive and imported to Rome as slaves, and I assume they will be the driving force of the series: Haesel, a pretty young girl who hates slavery; Saelig, a good-looking hunk of muscle who makes the ladies quiver; Redwall, who takes up a smidgen of the narrative but thrives in slavery, given his business acumen; Thane, a hot-tempered leader who quickly revolts and therefore is sent into hard labor; and beautiful Mertice, with the flowing blonde hair to her waist who falls in love with her handsome young master.

This first installment is titled “Barba The Slaver,” but Barba himself has little screen time. He’s the Rome-based slavemaster who sells the five youths, but other than a brief scene where he oversees their selling he doesn’t have much to do with the book. I’d imagine the book was named after him for the exploitative effect…which, again, the novel itself really doesn’t have much of.

Instead we hopscotch across a wide group of characters, sometimes from the point of view of the slaves, other times from their masters. Nothing much really happens, and given the book’s short length (barely 160 pages) it comes off more like the opening quarter of a larger novel – my assumption is all five books were written at once, but that might not be so. What I mean is, you could probably just read all five books as one novel.

But really, the multitude of characters overwhelms the paucity of pages…it’s like Frances has a hard time juggling everything and just says to hell with it and spins his wheels. So for one storyline we have Hadrian, intelligent business leader who has been given the job of building a new town. His slave is Haesel, who herself is intelligent, given that she was a high-born Briton. But as mentioned Haesel burns with a hatred of slavery and takes to her new lot in life hard, especially when she begins to grow feelings for Hadrian. Frances appears to be building up something between her and Hadrian, but leaves it open at the end of the novel.

Then there’s Areta, Hadrian’s wife, who has dedicated her life to pleasure and so is very much the cliched Roman harlot-wife. Her daily routine consists of going to the Baths, gossiping, and going home with some random guy – not that Frances ever gets explicit in the least. In fact the whole novel is written in a sort of antiseptic tone, which as I’ve mentioned before I find pretty common in British pulp. Dammit, I want trash, not psuedo-literature!!

Anyway, Areta initiates the novel because she’s envious of the oft-mentioned but never-seen Poppaea, who shows up at the Baths with a studly male slave that has all the women atwitter. Areta wants one of her own. So Hadrian takes her to Barba’s slave shop, where they spot Saelig, who is everything Areta could want. While there Hadrian kills the proverbial two birds by picking up Haesel, not because she’s Saelig’s sister but because he needs a new slave anyway. I guess Barba’s is like the Wal-mart of slave shops, but he does not discount on the double purchase.

The majority of the novel is given over to the interractions between Hadrian and Haesel and Areta and Saelig, with for example much focus given to Areta preparing Saelig for his debut at the Baths, where she’s sure he will be the envy of all the Roman women. Frances also dwells on initially-unrelated characters, like Melanos, a highborn Roman lady who has a casual sex thing with Hadrian and who enjoys competing against men in various pursuits. Frances intimates she might have Sapphic tendencies as well, but doesn’t elaborate.

Then there’s Alexander, studly young Roman of the priviledged class who gets ownership of beautiful Mertice, but doesn’t even notice her given that he owns a few hundred slaves. Mertice notices him, though, and so pines for him throughout the book, in what is by far the most annoying part. In fact Mertice is so stupid and docile that you eventually get a sick delight in her ensuing bad treatment, particularly when Alexander only notices her in his attempts to gain favor with Melanos, whom he lusts for (Melanos meanwhile loathes him).

A problem with the book is not only the similarity of characters and situations but also of names. Frances does himself no favors with character names like Melanos, Mertice, Areta, and even Rheta (Areta’s female slave steward). There are others besides, and it gets to be a chore keeping them apart.

Another problem is the aforementioned lack of events. The novel moves at its own torpid pace, with nothing major occurring. Saelig mimics various people for Areta’s amusement, Areta later throws herself at him demanding that he love her, Hadrian works on his new town with Haesel eventually becoming his right-hand woman, and in the only moment when the novel comes out of its own lastitude Alexander orders Mertice to wrestle another slave-girl, again in the vain hopes of gaining Melanos’s favor.

What’s missing is the sense of escapism one looks for in historical fiction, or the feeling of a lost age. Frances relates it all in a casual, offhand manner. I guess that could be seen as part of the book’s charm; whereas other Rome-centric historical fiction goes big and flashy, Frances here instead plays it low key and subdued, but still. When you read a novel titled Barba The Slaver which is announced as the first installment of a series called Slaves Of The Empire, you want something more than “low key.”
Posted by Joe Kenney at 6:30 AM

Yep, sounds pretty much like book 3, Broton The Breeder (only one I've read). Too many characters for so short a book, even if it is a series. And rather bland stuff for Roman slave fiction. I recall book three being a bit more racy, but never graphic. Kinda reminded me of Norman's GOR series. Lotsa potential, but nothing much ever happens.

Yeah, I think I’ll pass on those.

Off topic, I did read Phoenix #2. I have two words for it, HOLY CRAP. I’ve read THE ROAD and AMERICAN PSYCHO and Garth Ennis’s CROSSED. None of them hold a candle to twisted “Contam” scenes near the end of Phoenix #2. I was actually disturbed which is no small feat. That Alexander guy has no limits.

Upon your recommendation, I also picked up a copy of Able Team #8 Army of Devils. Haven’t read it yet, but I’m blown away by the opening. “A machete slash severed her hand. Blood pulsed from the stump to splash the sorority-house door and security chain.” Now that’s how you start a book! I mean this in all sincerity, those two sentences are brilliant in a way most people can’t understand.

Thanks for contributing to my latest literary addiction.

I am not much into reading, but somehow I got to read lots of articles on your blog. Its amazing how interesting it is for me to visit you very often estetik

Thanks for the comments.

Muskrat, yeah, those Boris covers are great, much better than the original UK covers. I think my favorite one is for #2, Haesel the Slave. I've got them all and will continue to read them...thanks for letting me know that #3 at least isn't as tepid as this first one.

Mike, glad you got Phoenix #2...I tried to intimate in my review how far-out and gross it got in the final pages, with the Contams. None of the other books in the series get up to that level (down to that level?), though.

Army of Devils is also a great piece of action trash and I'm glad you are enjoying it as well. You might want to also check out the Gannon trilogy by Dean W. Ballenger...incredible amounts of lurid brutality in those. I'll have a review for the third volume posting next week.

very nice to read these summeries of the Slaves of the Empire serie:
I was alway fascinated by the Boris Vallejo covers of then not having the slightest idea what the pictures actually stood for.
And reading how drap ans shallow the novels actually are, sort of wathered down Gor novels, which I dislike very much, you spared me the trouble to purchase the books myself.
I have bought already enough crappy books with splendid covers.
Thank you for putting this on the net.