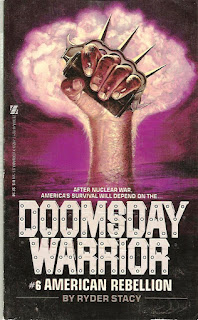 The Doomsday Warrior series storms on, picking up immediately after the events in #5: America's Last Declaration, with Rockson and Rona barely alive after a massive assault by 21st Century Nazis on the Freefighters’ home base of Century City. American Rebellion opens with Rockson knocked out cold, having been tossed like a ragdoll by a falling bomb – that imminent “Death itself” he must have felt, reaching out for him, on the last page of the previous installment.

So with American Rebellion authors Ryder Stacy finally deliver on that hoary old action-pulp cliché: the hero who suffers from amnesia. Yes, the bomb blast not only knocks Rockson unconscious (and Rona too), but when he wakes up he has no idea who he is. This makes him easy pickings for the roving bands of slavemasters who like vultures hunt and peck through the carnage of the just-ended battle; Rockson is pounced on as perfect material for the labor force being sold to newly-built Nazi city Goerringrad.

Rona meanwhile was knocked several yards away by the blast, and when she comes to Rockson is already gone, taken by the slavers. Not that Rona knows this. She has her own issues, though, captured by another group of slavers who know she’ll earn them quite a profit due to her beauty; Rona too is taken to Goerringrad, where she will be put on the auction block as a pleasure slave.

The back cover has it that this amnesia storyline will be the meat of the tale, and to tell the truth such stories have never done much for me. Luckily though Rockson has his memory back around a hundred pages into the tale. Before that though we must endure long stretches of Rockson being put in a squalid existence with the other slaves in Goerringrad, trying to foster their patriotic spirit while shovelling up corpses all day and tossing them into a toxic marshland along the outskirts of the Nazi-run city.

The action focus of previous books is lost here; Ryder Stacy focus more on Rockson’s inherent ability to lead and inspire. In a way the plot of this one’s sort of original because from the start we’ve been told that Rockson is regarded as “the Ultimate American;” here we see him still having the same charismatic effect on others, even when he just thinks he’s some anonymous slave.

Also, American Rebellion further plays out an element that has been featured in every novel in the series yet – namely, a group of American slaves “becoming men again” and turning on their Red captors. In previous books these have usually been little bits, usually having nothing to do with the larger storyline, and usually ending with the slaves dying as a result…that is, after killing a bunch of Russians. So then this novel pretty much plays out like one of those incidents, only in full, going on and on, with Rockson always on the cusp of remembering who he is.

Rona’s storyline is more entertaining. She’s sold to a high-ranking Nazi who takes her into Goerringrad’s Nazi palace. In a chuckle-inducing and bizarre scene the commandant of Goerringrad falls at Rona’s feet and begins licking them…turns out Rona is a dead ringer for the Nazi-worshipped Eva Braun!

Not the real Eva Braun, that is; in a goofy turn of the narrative Ryder Stacy explain that Rona looks like an idealized portrait of Eva…one where Eva has been given red hair and a killer bod…! Anyway the Nazis now worship Rona as Eva reborn, a goddess in flesh, and put her up in an ivory tower where no one may touch her or even look at her.

But guess what – Rockson has a perfect view of her while on his daily rounds of corpse-dumping. Of course, he can only see the gorgeous redhead gawking down at him, waving her arms frantically as if she recognizes him. Rockson can only suspect that he must know the woman, but meanwhile he has other issues, like the endless ringing of alien voices in his brain (turns out to be psychic messages being sent out to him but going unanswered) as well as the dark shape he sees skimming beneath the surface in that toxic marshland.

Anyway, before you can’t take much more Rockson has regained his memory (in true cliched fashion it’s only after some ruffian slave, jealous of Rockson’s power over the others, bashes him on the head during a sneak attack) and is leading the slaves in a riot. They manage to free Rona but Rockson and Rona are pulled away by an escape rocket sled or something, leaving the just-freed slaves to their fate.

Rockson wants to go back, but they’re pursued by Nazis and end up in the marshland, where Ryder Stacy get to unleash another family of monsters into their unfolding epic. Each volume of the series has had some new monster in it, and American Rebellion doesn’t disappoint. This time we have the Narga, Swamp Thing-like monsters who once were human but were killed by the Nazis and dumped into that toxic dump, which brought them back to life; Rockson is only able to keep them from eating him and Rona with his psychic skills. Soon enough he is friends with the leader.

The Narga are basically like the monsters in Where the Wild Things Are, only they like to eat people, even “smoking” their corpses over campfires to save for later. Ryder Stacy published a book on movie monsters in 1984 and you can tell that here they were indulging in all of their horror movie joys; the Narga are probably the most frightening and gorge-inducing creatures the authors have yet presented us. Plus their names are damn awesome: there’s the leader, Nitrogen Carnivore, and others like Sulphuric Death, Monoxide Blood, and even Methane Death. It’s surprising some ‘80s speed metal band didn’t lift one of these for an album title, or even a group name.

The novel’s only halfway through and Rockson has already launched a raid on Goerringrad, the Narga at his side; here the authors delight in giving us all sorts of gruesome detail about the monsters biting off heads and eating guts, all delivered in their patented clunky style. If I’m right in my estimation of who wrote what, then I’m betting Jan Stacy wrote the majority of American Rebellion, as it has little of the psychedelic/New Age flourish I suspect was the work of Ryder Syvertsen. (Though there is a cool scene where we see the bizarre cult rituals of the Narga, who, to quote the old Sho Kosugi film, pray for death – if there’s any scene in American Rebellion written by Syvertsen, this would be it.)

Unfortunately the novel sort of plods on after this. Having freed the slaves and bid farewell to the Narga, Rockson and Rona and a young slave Rockson has taking a liking to make their way to Century City, which when we last saw it in the previous book had been hit by an indirect thermonuclear blast. They arrive to find the place in a total shambles, a mere shadow of the underground paradise of previous books.

The novel takes on a Jules Verne feel as Rockson, back together with his pals “the Rock squad,” ventures into the pits of the earth, trying to discover and fix whatever has ruined Century City’s power supply. This section just kind of goes on and on, with the team in their asbestos suits making their way down into 200+ degree heat.

But what’s weird is that the authors seemingly tack on a finale that has nothing to do with anything; like a jump cut in a film, a missing frame or something, immediately after fixing the power supply Rockson is squared off by himself by some hidden explosives and suddenly must fight an entire team of martial arts masters! This goes on for about fifty pages, just one kung-fu fighter after another introducing himself to Rockson and then engaging him in a fight to the death. There are even a few ninjas.

I’ve always felt that martial arts fights don’t translate as well to fiction as gun-fights do…it gets very repetitive to read about someone throwing a punch or a kick. And here it gets very repetitive, just going on and on and on…not helped by Rockson’s sudden knack for delivering bad one-liners to his opponents, something even the assassins make note of. My assumption is the killers were sent by the Reds – in a brief scene earlier in the tale we witnessed the first meeting of Premier Vassily, President Zhabnov, and Colonel Killov, who united in their determination to kill Rockson, agreeing to send out “the best of the best” to assassinate him.

But our authors sort of leave this vague; only after the endless battle has ended does Rockson stop to ponder how the assassins got there, beneath the guts of Century City, and if they relayed its location back to the Reds. I mean, it’s pretty admirable that these dudes were able to so easily find the place that Killov has been fruitlessly searching for since before the series began!

We get another attempted assassination scene, this one better than all the others combined, as another ninja-type materializes in Rockson’s room and uses mental trickery on him, not to mention a flaming sword. But still, American Rebellion has lost steam long before, the entire last half coming off like padded wheel-spinning and padded endless fighting.

Interestingly though this volume does not end on a cliffhanger – unless, that is, you want to count the sex scene that’s brewing between Rockson and Rona on the very last sentence of the book. And speaking of which, this is the only book yet in the series that doesn’t feature one of Ryder Stacy’s trademark goofy-but-graphic sex scenes…dammit!!
Posted by Joe Kenney at 6:30 AM

Just found this blog while seeing if anyone else had reviewed this magnificent series - in case you're interested, I've been doing a more in-depth chapter-by-chapter snark through the books over at Westeros (latest thread here) - up to book 8 so far, so ware spoilers!