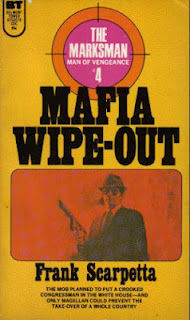 Without a doubt this is the strangest volume of the Marksman yet. Coming off like a Marx Brothers movie with gore, Mafia Wipe-Out combines the mob-wasting nihilism of previous books with a lowbrow sense of humor, one that bounds right over the limits of reality and into full-on fantasy. Only problem is, it’s not very funny. And it’s not very good.

As mentioned in my review of #3: Kill Them All, this volume falls outside of the mini-storyline that started in the third volume and continued in #5: Headhunter. But then, Mafia Wipe-Out doesn’t have much to do with any Marksman novel. “Hero” Philip Magellan in this one is a superhero, famed for his Mafia vanquishing, unable to be harmed or killed. Not only that, but he’s developed a penchant for (really bad) one-liners, ones that would even make James Bond shake his head.

There isn’t much of a plot here, just a series of madcap confrontations between Magellan and a revolving door of bizarro mobsters, a new villain each chapter, each chapter ending on a lame cliffhanger. Well, there’s sort of a plot – Magellan discovers that the Mafia plans a council meeting in Elgin, Ohio, and there they will have two points of discussion: the death of Philip “Marksman” Magellan and the installation of a Mafia puppet into the White House.

Magellan, who is spurred by the memories of his slain family in this novel more than any other I’ve yet read, burns with a desire to kill all of the mobsters in Elgin and prevent their “Mafia President” idea from happening. But the Elgin summit meeting doesn’t occur until toward the very end; instead, Mafia Wipe-Out concerns itself with playing up to its own title, with Magellan wiping out mobster after mobster.

One thing I can say is that the book goes by like a rocket. In fact it moves so quickly that little sticks with you; it’s just an endless series of Magellan coming upon the latest mobster, killing him, offering a lame one-liner, and then running into the next mobster. True to the series, Magellan is so superheroic that his victory is never in doubt, even in the few instances when the mobsters get the advantage on him. There are laughably-stupid scenes where Magellan is able to muscle his way out of his bonds or even recover from significant damage and just brush it all off – that is, after he’s killed the mobster who got the jump on him.

Let me give you an idea of how goofy and stupid this novel is by examing one particular sequence. Okay, Magellan has killed a bunch of mobsters unrelated to anything in New York, and then he comes upon the info about the Elgin meeting. After a quick gunfight in a funhouse and park, he’s briefly kidnapped by a Mafia don who takes Magellan away in his car. Magellan of course manages to not only kill the guy but his henchmen as well, in a big firefight along a turnpike. As the cops swarm in, Magellan tries to figure out how to get away from them and prevent the Mafia takeover of the White House.

Then a sportscar driven by a gorgeous blonde pulls up, and the girl, whom Magellan has never seen before, says she’s here to pick him up. All of this a show for the cops…who just let Magellan hop in the car and leave the crime scene. (This is just a taste of the lack of reality in the novel.) Magellan assumes the girl, who calls herself Tina, has picked him up due to his good looks – Magellan reminsces over all the women who have flocked to him over the years, so this isn’t all that new to him!

But no, Tina reveals that she knows who Magellan is, and in fact she needs his help. At that moment some heavy trucks bear in on them, blasting away. “I wish we had some grenades or something,” says Magellan. Then he looks in the glove compartment – only to find some grenades in there. Again, it’s all like a lame Duck Soup riff or something. After Magellan kills the pursuers, Tina reveals that they were actually Feds, and further Tina is the daughter of a Mafia don – in fact, the don Magellan just killed on the turnpike, though she doesn’t know Magellan has killed her dad.

Next Tina imprisons Magellan in metal straps that come out of the carseats, and tells him that not only is she into s&m, she also wants to screw Magellan before taking him to Elgin, where the Mafia has plans for him. Magellan goes on about how disgusted he would be to even touch a member of the Mafia, and there ensues an unsettling scene where Tina tries to rape Magellan, and he bites a huge gaping hole in her mouth (!). Finally he gets the upper hand, and then debases Tina in such a way that the reader is truly unsettled…making her crawl around like a dog and say how she’s no-good slime and etc.

But wait, it gets worse. Magellan doesn’t want to kill a woman (despite the fact that earlier in the book he had no qualms with killing a 300-lbs hitwoman or the fact that he just bit off a portion of Tina’s face), and tells Tina he’ll let her go, but she manages to grab his gun and blast at him as she runs into the woods. Magellan throws one of those grenades at her and in yet another unsettling moment blown-off pieces of Tina fly out of the woods and overtop Magellan: Tina’s arms, Tina’s head. Magellan says “Bye-bye” to the pieces, but as he turns Tina’s flying severed leg hits him in the ass, and Magellan mutters that it’s just like a woman to get in the last word.

Now, I’ve had my problems with women (who hasn’t?), but blowing them up with grenades just seems a little too much, especially when it’s all played for laughs. But that’s the other thing. As you’ve no doubt registered from my little rundown, this novel just ain’t funny. It’s just stupid, mean-spirited, and scatterbrained.

Unbelievably, it only proceeds to get more inane, as when Magellan arrives in Elgin he just sort of walks around the mansion where the meeting will take place, and takes on the occasional mobster who happens to walk by, all of whom know who Magellan is and who try to dispense with him quickly, to no avail.

Then there’s another character, a rogue scientist who creates chemical warfare, and there follows a long protracted sequence where Magellan is sprayed by an experimental gas which he just happens to have read about, so he knows how to overcome its effects, only to turn it around and use it on a bunch of other mobsters. (This isn’t even mentioning the other gas, one which gives people superhuman power.)

The “climax” in the Elgin mansion is also seriously stupid, with Magellan just walking in and making all of the mobsters lay down on the floor! There’s absolutely no tension or drama or anything, just superhero Magellan doling out glib and unfunny lines as he blows away various mobsters. And more unsettling stuff besides, as you actually start to feel bad for the mobsters, in particular one who wears a leather suit and comes at Magellan with a whip: Magellan figures the guy must be a “sado-masee” gay and calls him all sorts of names as a result, toying with him before killing him.

I was under the impression that this one had been written by series editor Peter McCurtin. But reading the book made it clear that someone else was behind it. After a little research I discovered here that Mafia Wipe-Out was in fact written by someone named Michael Harris. I have no idea who he is/was, or if he wrote more volumes of the Marksman. We can only hope he did not.

Despite the irreverent spirit and Keystone Cops mindset, Mafia Wipe-Out just comes off as being a stupid waste of time, churned out by an author not taking the story, series, or character at all seriously. And if the author doesn’t care, why should you?
Posted by Joe Kenney at 6:30 AM

I read this recently. Have read a few Sharpshooter/Marksman novels so was used to Phil Magellan suddenly becoming Johnny Rock in the next paragraph because the writer forgot where he was...but this one took the biscuit. Remember constantly shaking my head throughout. I live for this stuff though so greatly enjoyed it. You have to admire the blatant disrespect for the reader!

Of all I've read only 'Eat Them Alive' by Pierce Nace matches this one in terms of almost porn-levels of disdain for the reader! have you read that one Joe? I know you don't bother with horror much on here but I highly recommend it...

Thanks for the comments. N. Brown, "blatant disrespect for the reader" sums it up perfectly! You're right, I haven't reviewed much horror on here...I have several cheap '80s horror paperbacks, but just haven't read them. I don't have "Eat them Alive" but I'm familiar with it...I know at one point Justin Marriott wondered if it might've been Dean "Gannon" Ballenger under a psuedonym, but I think it turned out to be someone else. I'll be sure to read it someday, though. Thanks for the recommendation!

just like a woman to have the last word! Come on now, that's funny ...