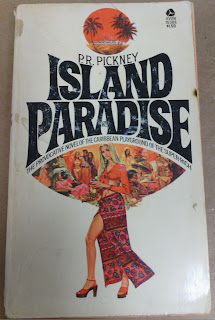 My definition of “pure” trash fiction is simple: glamorous people, exotic setting, lots of sex. Island Paradise falls firmly into this mold, a novel very much like Fire Island (a hallmark of pure trash fiction) in that it’s such a beach read that it’s about people going to the beach. Unlike Burt Hirschfeld’s classic, though, Island Paradise doesn’t appear to have had much impact on readers, so obscure that I couldn’t even find a cover scan online, and had to make do with taking a photo on my work-issued “smart phone” (a ZTE Anthem, for those taking notes).

As is expected, the cover painting and back cover copy oversell the novel’s “sizzling” elements. In fact, Island Paradise is a pretty tame read, never graphic, never going beyond the constraints of the average romance novel of the time. And worst of all, it derails from the expected (and desired) plot about jetsetters frolicking in a posh island resort and instead becomes embroiled in a banal storyline about island politics and a brewing native revolt.

The book starts off capturing the feel of the jetsetting elite, circa summer 1973, as a bevy of people descend upon the resort of Shalimar, located on a fictional island in the Caribbean, for a weekend of sun and fun. Newly opened, Shalimar is trying to get its name made, and the opulent resort is managed by Grov, a former tennis pro, and his wife Denise, a swinging and insatiable French beauty who you’ll not be surprised to know was my favorite character in the book. (Unfortunately her collected scenes don’t amount to much.)

But man there are a lot of characters here to keep track of. It would be one thing if they weren’t all so similar. And it would be another if the majority of them weren’t so damn boring. Unbelievably, Pickney chooses to focus on the bland characters of the huge cast, given more-compelling characters like Denise short narrative shrift.

Even having read all 300-some pages of this thick book, I don’t think I could give a complete rundown of the cast. But the standouts, bland as they are, would be David, a famous author firmly in the Norman Mailer mode, who has come to Shalimar with his alcoholic wife. David becomes such an annoyance that the reader cannot stand him; so immersed in his own ego as to be infantile, he ignores his wife and instead begins to obsess over Emily, a former paramour who just happens to be here in Shalimar, where she is having an affair with the island’s mayor. (That the mayor is black is a huge cause of concern for David.)

There’s also a New York senator and his wife, and their plot is by far the worst, with lots of backstory and worrying over the political climate back in New York…stuff which, I have to tell you, has absolutely no bearing on the plot, let alone any resolution. Then there’s the couple’s mousy friend, Margaret, who finds herself in Shalimar, deciding after a lot of introspection that she should cave in and marry the millionaire who has been pursuing her, after all. Her storyline especially seems cribbed from the most chaste Harlequin romance imaginable.

On a more interesting note there’s Pammy and Buffy, young and beautiful siblings who gallivant about the globe from one hotspot to another, their little dog in tow. Fresh out of finishing school, they have no care in the world other than when the next lavish meal is coming and if they should smoke dope or not. (They do.) They also engage in one of the only two sex scenes in the book, where they take turns with studly Shalimar employee Rod while skinnydipping in the ocean. But even this scene is so prudishly-rendered as to be bland.

There are others…Simon, a British photojournalist who appears to be trying to make for Pammy and Buffy, but instead spends a lot of time researching the island’s politcal climate. Then there’s Duke, a gay member of the elite whose mere word can make or break one’s public image. Another character who could steal away scenes, Duke too is relegated to third-class status and is instead mocked by the others…not to mention suffering a horrible fate which is all the more horrible for how little attention or care Pickney gives it.

And now let’s get to the island political tale, which unfortunately takes up way too much of the book. For one, Pickney pulls a fast one on us; we assume this novel is about the jetsetters, and that’s how things go for about 70 fun pages. Then Pickney introduces Sebastian, the aforementioned mayor of the island…and he becomes basically the major protagonist of the tale. So we go from a book about the wealthy elite sunning and sinning in paradise to a boring, boring storyline about Sebastian and his problems with the locals, all of whom take umbrage at having to serve “whitey.”

There are several scenes of the jetsetters, in particular David, trying to get to the root of this, even talking to the leader of the rebels, who happens to be Sebastian’s cousin. You keep wanting the story to get back to Denise, who we’re told likes to sun each morning practically nude, her nipples covered by nothing more than tiny sea shells which all the guys keep standing around and watching in the hopes that one of them might slip off, though they never do.

A bit of narrative relief comes with the late arrival of a makeup tycoon who shows up with his own mousy and subservient wife; this guy sort of tramples over everyone, emotionally and verbally at least, and he also manages to score with Denise on his yacht in the book’s only other sex scene – but it’s over in a second (literally), and that’s that. (Denise is even more disappointed than the reader, I’m sure.) But for the most part, these characters are sort of put on hold so Pickney can focus on the storyline about island politics and a brewing native revolt.

And what’s funny is, Sebastian and the jetsetters are so damn stupid that, even when they’re practically told by the locals that they’re planning to revolt that night, they still don’t know what’s going on when it happens! And the revolt itself is so hamfisted and poorly-conceived…the locals converging on Shalimar, depositing the beaten and bloody body of Duke, whom they’ve captured and even friggin’ emasculated, and after a talk between Sebastian and the rebel leader it’s all over!

Part of the appeal about these classic trash fiction novels is the long-simmer nature of the plots…like in the best of Hirschfeld, where he takes various characters and puts them together in one location and lets them brew. That’s what I wanted here, and that’s what seemingly was promised…until the derailment into the storyline about Sebastian and the natives. Even the end is sort of hamfisted, everyone just leaving and Sebastian welcoming the next round of guests to his island, the majority of the various storylines not even wrapped up.

P.R. Pickney is a psuedonym of Patricia Tierney and Rita Rothschild Picker, who out themselves on the copyright page. I don’t see any other novels published by the latter, but it looks like Tierney moved into nonfiction after this. Of course I have no idea who wrote what on this collaboration, but I can say that these authors POV-hop on the level of another writing duo, Ryder Stacy. Also they seem to enjoy inserting commas into sentences with no rhyme or reason.

And by the way, check out my copy of the book in the photo above. The top half of the cover is loose from the spine, there are multiple tears and creases, the book itself is about to fall apart in the middle, and there’s even what appear to be burn marks on the cover. I mean, what the hell did this book go through? In a way it’s more interesting than its actual contents…
Posted by Joe Kenney at 6:30 AM

Thanks for warning us. Again, love your review. I would also have bought the damn thing, had I seen it. And I'm sure I already own some other inferior novels. That's the price of being passionate about sleaze, isn't it? Anyway, good job, and keep them coming.