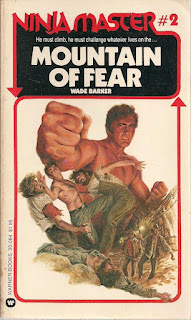 The Ninja Master series improves in a major way with this installment. After the tepid bore that was Vengeance Is His, Mountain Of Fear comes as a definite jolt and is great throughout. We have Ric Meyers to thank, making his debut here as “Wade Barker;” who knows whatever happened to the first dude who used the house name, but thankfully he’s gone, and he isn’t missed. Warner Books should’ve hired Meyers from the start.

As mentioned in my review of Vengeance Is His, Meyers was brought in after the original guy had already penned his second volume, but the publisher felt it wasn’t fit to print. The title and cover were already done, and it shows, as the cover for Mountain Of Fear doesn’t have much to do with the actual manuscript Meyers turned in. Which isn’t a complaint; take a look at that cover and you expect a tale of some bare-chested guy beating the shit out of pitchfork-wielding hicks in some mine shaft.

Instead, Meyers delivers a super lurid tale about a former Nazi concentration camp doctor who has bought out a town in rural Virginia, where he and his perverted son rule with complete control; wayward females and orphans are captured and brought here, where, after being raped by the town’s “police” (who are really just convicts in uniform), they are sent up the mountain which looms in the center of town, where they are further raped and tortured by the Nazi’s son…before moving on down the line to the doctor himself, who experiments on them.

So we have here, obviously, the making of some truly sick and warped stuff. Meyers doesn’t fail when it comes to making the villains thoroughly evil and deserving of grisly deaths, and then he sets our series hero, Brett Wallace, upon them, so that we actually cheer as he eviscerates cops and slices out their brains…even torturing some in such a fashion that they know they are dying, and who their killer is.

Brett is also changed to drastic effect. Meyers must’ve read Vengeance Is His and tossed it aside in anger (like I almost did), as he spends the first quarter of the novel quickly disposing of all of the characterizations and series set-up that the previous author introduced. For one, young martial artist Jeff Archer, who was geared toward being Brett’s acolyte in the final pages of Vengeance Is His, is basically removed from the narrative, as is Rhea, the Japanese-American beauty who served as Brett’s occasional girlfriend. They’re still there to aid Brett in his vow to protect the innocent, but in much reduced roles than what a reader of the previous volume might have expected.

Brett has no time for such niceties, given that Meyers has remolded him into a grim sort of killing machine who almost makes Richard Camellion look like Mister Rogers. In the opening of Mountain Of Fear, after Brett is already on the scene in Virginia, he flashes back to his recent re-training in the art of ninjutsu. Meyers obviously realized that the carefree Brett of Vengeance Is His was not suitable material for an action protagonist, and thus has Brett’s former ninja trainers realize the same thing. After calling him out on his apparent “desire for death,” they return him to Japan where Brett dives back into ninja training, emerging more deadly than ever.

But in addition to his new and refined deadliness he’s also cast aside any sort of humanity. Gone is the David Sanborn-listening, Absolut vodka-drinking rake of the previous book, always seen around town with the latest popular bimbo on his arm. Now Brett goes to extreme lengths to be “no man,” as he often refers to himself. A human shadow, melding into crowds, only seen when he wants to be seen.

All of which serves to recreate Brett Wallace into the most devestating and deadly protagonist I’ve yet encountered in a men’s adventure series. Anything he touches he can turn into a weapon, and his skill is such that he can even gain mental holds over his opponents. I guess the only problem then is the villains he fights throughout Mountain Of Fear are no match for him. Sure, they’re brawny thugs who have gone to prison for murders and rapes and etc, and they come bearing down on Brett with shotguns and Uzis, but still. It’s kind of like in Airwolf when that “high-tech helicopter” would go up against twenty year-old Hueys or whatever.

Meyers weaves in the lurid stuff by opening the novel from the perspectives of two young black ladies from New York who run into a roving patrol of “cops” here in Tylerville, Virginia. This is just the start of the degredations women endure throughout the novel…one of them is insantly raped and the other manages to run away, only to find the locals are just as sadistic as the police. The whole town is guilty, something Brett quicky deduces – he’s come here, by the way, after studying various data reports of rapes on the east coast, stumbling over the apparent fact that something strange is going on in Tylerville.

Mountain Of Fear is yet more proof that the shorter these books are, the better. At 156 pages, it moves at a steady clip, never once falling into repetition or dullness. This is the first Meyers novel I’ve read and I have to say I’m impressed. He has a definite knack for creating sordid atmospheres, warped villains, and gory action scenes; this book is more violent than most others of its ilk, up there with GH Frosts’s legendary Army Of Devils.

Meyers certainly knows his martial arts stuff. He namedrops various ninja moves and weapons with abandon, but unlike the execrable Mace series by Joseph Rosenberger, he actually bothers to explain each term. Brett is a living weapon, but he also uses a host of weaponry, ancient and modern; unlike the characters in most ninja pulp, Brett has no problem with picking up a dropped firearm and blowing away some thugs, but mostly he uses his katana sword and other exotic weaponry. There’s also a cool scene at the climax where he straps armor over his ninja costume.

Where Meyers really excels is the inventiveness of Brett’s many kills. In this novel he kills people with shards of an ice cube (!), a drumkit cymbal, and even the tripod that held up the cymbals. But he sows the most damage with his traditional weaponry, particularly in the climax, with an armored Brett infiltrating the Nazi’s mountain fortress and chopping the shit out of legions of armed goons -- another scene reminiscent of Army Of Darnkess, even complete with ankle-deep pools of blood and gore. It comes off like Die Hard if it had starred Sho Kosugi and been directed by Paul Verhoeven. (Now that would’ve been a movie…)

The action scenes, as mentioned, are plentiful and gory, but it bugged me a bit that Meyers would write a lot of them from the perspective of the cops as Brett was killing them. In other words, we're in the perspectives of these convict cops as they go about their latest atrocity, then suddenly they're being hit by something and not knowing what’s happening, and then they're seeing Brett’s masked face a second before they die. I prefer action scenes to be relayed from the protagonists’s point of view, so we see what he’s doing and to whom. To be fair, though, Meyers moves away from the thug-perspective as the novel continues, and the majority of the thrilling climax is solely from Brett’s point of view.

I really enjoyed the book, and it makes me happy that Meyers eventually became “the” Wade Barker, though there are a few more volumes in this initial series that he did not write. Meyers wrote the entirety of the ensuing Year of the Ninja Master and War of the Ninja Master series, but as for the Ninja Master series, he only wrote this volume, #4: Million Dollar Massacre, #6: Death’s Door, and #8: Only The Good Die. (Million Dollar Massacre was apparently another case where the author of the first volume had turned in a manuscript that was rejected, and Meyers had to fill in, catering to the title and the already-completed cover.)
Posted by Joe Kenney at 6:30 AM

This was the first Ninja Master I read, and, yeah, it's pretty cool. Did you talk to Meyers to find out which ones he wrote?

Marty, thanks for the comment. Meyers claims the 4 vols of Ninja Master he wrote on his website: http://ricmeyers.com/bibliographric/. I can't remember where I read about the art for #4 already being done and Meyers called in to pitch-hit on a new manuscript, but I know it was in an interview with him I found somewhere online.

But yeah, I've read your review of this volume on your blog and you and I are definitely on the same page...a pretty cool book, indeed!

It really is great to be able to find and learn about all these writers. When I started digging around and writing about these sorts of books a decade ago, I couldn't find ANYTHING on people like Joseph Rosenberger, Ric Meyers, and so forth.