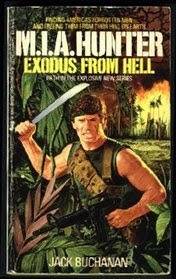 The MIA Hunter series gets another shot in the arm with its latest version of “Jack Buchanan,” who turns out to be none other than our old friend Chet Cunningham of the Penetrator series. Cunningham’s prose here is a little more polished than that earlier series, but make no mistake there’s still his patented sadism and characters who do bizarre things with little explanation.

As I’ve mentioned before this series is very repetitive. Each novel is basically the same as the one that came before, only the minor details are different. And what with the repetitive story angle and the revolving cast of journeyman ghostwriters (most of whom only stuck around for two novels or so), there’s no continuity or any sense of a building narrative. It’s just Mark “MIA Hunter” Stone once again sneaking into ‘Nam to break out some prisoners of war, along with a team of natives and his ersthwhile partners Hog Wiley and Terrance McLoughlin.

Actually that’s not fully true. This time Stone goes into Cambodia, not Vietnam. Already then the novel is worlds different from its predecessors. Okay, enough sarcasm. The country-change doesn’t make much difference at all. What’s funny though is that Stone and his team have freed the POWs within the first forty pages of the novel; Exodus From Hell is really about Stone and his team’s long journey back through Cambodia as they try to avoid enemy patrols, pick up a missionary (who is of course gorgeous) and her flock of orphans, and even encounter pygmies.

The reason they have to hoof it through Cambodia is because Stone’s helicopter is destroyed after they free the POWs. Speaking of which it’s here that Cunningham gets to unleash his trademark sadism, as one of the prisoners, Patterson, relishes the opportunity to mess up the camp commander pretty royally, basically butchering the guy. But after this pretty great opening scene the novel settles into more of an adventure-fiction flair, with the team trying to survive the elements.

Cunningham also indulges in his other trademark, the infrequent stream-of-consciousness material where he can jump into a character’s mind and go from topics A to Z in the course of a single sentence. He does so here with Patterson, who as we meet him is strung up in the camp for some minor infraction; he does so again later in the novel with Hillburton, the other freed POW, one who is close to losing his sanity.

Another constant with this series is the endless onslaught of action. Exodus From Hell is no exception. It starts off pretty well, with the expected skirmish as Stone frees the prisoners and then makes his escape, but gradually the book wears you down with nonstop scenes of Stone et al bumping into some Camodian (or Vietnamese) patrol and getting into yet another firefight. Stone by the way uses an SPAS-12 combat shotgun this time, newly introduced by Cunningham, as in the past Stone basically stuck with a CAR-15. However Cunningham plays it conservative with the many action scenes, not dwelling on the violence and gore as he did in say Bloody Boston.

One of the many goofy charms of Cunningham’s entries in the Penetrator series was hero Mark Hardin’s frequent encounters with nubile women, most of whom would throw themselves into his arms with almost a reckless abandon. It actually happens here as well, with Stone scoring with that missionary gal, an actual virgin named Mary Eve who has taught orphans in Cambodia for the past decade. The scene where she gives herself to Stone – while the rest of the team is apparently just a few feet away – is especially chuckle-inducing, mostly because it’s just so hamfisted and hard to believe. But at least Cunningham put some sex in the book, a rarity in the sterile, gung-ho world of ‘80s men’s adventure novels.

There’s a definite air of desperation as Stone and his men realize they’re up shit creek without a paddle. Cunningham works some tension into the narrative as they begin the dangerous journey back the way they came, and along the way they take a lot of damage. Loughlin gets hurt early on, but since he’s more cipher than man you quickly forget about it. But Hog really gets hurt, to such a point that they have to construct a rig to carry his massive frame – all of which adds to the futility of their plight.

The action scenes, while too frequent, are nevertheless well done, with Stone and team using their better equipment and training to take on much larger forces. Cunningham also jumps often into the POVs of the native guides, in particular Sen, a Cambodian woman who serves as interpreter before Mary Eve arrives on the scene. (Another hallmark of Cunningham’s is the sudden dropping of characters with no warning or reunion, as if he forgets about them before finishing the manuscript; Sen just drops out of the tale and we keep waiting for her to return but she never does.)

I think Cunningham also wrote Stone: MIA Hunter, ie the unnumbered volume of the series that was published after volume #6, but I’m not sure. Who all served as “Jack Buchanan” is something of a mystery, and it would be great if series honcho Stephen Mertz could someday shed light on it.
Posted by Joe Kenney at 6:30 AM