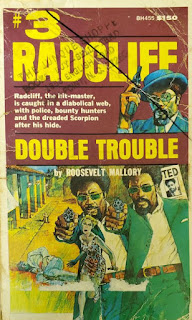 "Or if you get your news from the sort of people who capitalize the “b” but not the “w,” which pretty much amounts to the same thing as being brainwashed."
Perhaps it's getting to be time for you to finally review Mugger Blood(The Destroyer, #30)?
Good review of Double Trouble.

Interesting! Does anyone know who did the cover art for the Radcliff series?

Robert - According to the book "Sticking It To The Man" the artist was Monte Rogers, though a web search sadly turns up very little on him. I did find a cool b&w western illustration called "Mescalero" by him though.

There was a re-issue of the Radcliff books with different artwork later on, and the artist for those books was Corey Wolfe.

Napoleon, it's funny how these little changes are so pernicuous. In a bit of synchronicity I happened to be reading Norman Mailer's "Of A Fire On The Moon" this weekend, and saw that he wrote "White" and "Black" throughout, ie he capitalized both. This was in 1969, and Mailer certainly considered himself progressive (he pretentiously refers to himself as "Aquarius" throughout). Interesting how such little changes can be used to further divide us -- though judging from the grassroots movement at the local and state levels against Critical Race Theory being implemented in school districts, I'd say people have finally had enough of this race-baiting bullshit. So maybe there's hope for the future. I'm doing my part -- we don't drill it into our 4 year-old that he has an Asian mom and a white dad. He just knows he has two parents who love him.

Well anyway, none of that has anything to do with your comment. I have a ton of Destroyer books, but Muggers Blood isn't one of them! I've been told about it before, though, and I'm sure I'll get it one of these days. I've just never been too fond of that series. I prefer my men's adventure to be delivered straight.

Bob -- TrueAim beat me to it, but that Crime Scene article I link to has an interview with the artist. And also that article is/ from "Sticking It To The Man," something I neglected to mention above!

TrueAim -- Thanks for the email you recently sent, will be responding to you as soon as I can!

Thanks for the artist ID, folks!

Joe - Haha! No worries! You're probably the busiest hombre in all of Texas what with your job, your family, and this amazing site and all that it entails--tons of reading, writing and research. I don't know how you find the time, man! But since I'm back into reading my loads of unread paperbacks again, I'll shoot you an email from time to time if I find anything obscure that might pique your interest.

And thanks for reviewing some of these Holloway House/Blaxploitation PBOs. I think they're a super cool niche of the "glorious trash" (or is it "Glorious Trash"!?) that we all love so much. A lot of them are hard to find or cost a mint, but there's some real gems among them if you can find 'em--even outside the legendary Iceberg/Goines bibliographies. A few of the Holloway House authors I really like are: Charlie Avery Harris (great stuff!), J. Jason Grant, J. Lance Gilmer, James-Howard Readus and Omar Fletcher. Combined, they wrote lots of very gritty hardboiled "street thrillers" set in the 70s/80s. And J. Jason Grant even wrote a b/Black western set in Texas called "Coal." It's reached cult status and they're now rare and usually cost a boatload. Worthwhile though if you like westerns and can get a copy.

Surprisingly, I've never been able to find a comprehensive list of all the PBOs that Holloway House published. I've put together my own running list, but I'm pretty sure it's far from complete. If anyone has a complete list or a link to one, please share! Thanks.