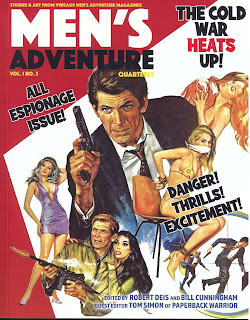 Men’s Adventure Quarterly #2, edited by Robert Deis, Bill Cunningham, and Tom Simon
April, 2021  Subtropic Productions
I really enjoyed Men's Adventure Quarterly #1 a lot, but as expected I enjoyed Men’s Adventure Quarterly #2 even more. The first one had great stories and wonderful production quality, but Westerns have never really been my thing, so I knew that this second volume, with its focus on Cold War spy stories from men's adventure magazines, would be more up my alley. Once again the issue comes off like a vintage men’s magazine, only with much higher print quality, complete with risque vintage ads, a gallery of beautiful women, and even letters to the editor to go along with the stories themselves.
As with the first volume we get a series of nice intros from each editor which are broad outlines of men’s mag spy stories and how they intersected with paperbacks. I thought this would’ve been a good opportunity to mention a few vintage paperbacks that actually had their origins as spy fiction in men’s adventure magazines: Spy In Black Lace, Assignment X (an Emille Schurmacher men’s mag spy anthology I keep meaning to read), Our Secret War Against Red China, and Six Graves To Munich. Well, the latter is really more of a post-WWII revenge thriller, but it operates very much like the Cold War tales presented here in MAQ #2, and also is one of the few (only?) men’s mag stories that got expanded into a novel. I still don’t understand why that didn’t happen with more men’s mag stories; I’d give anything to read a full novel of “Blood For The Love Slaves” (and still keep thinking about just writing the damn thing myself).
I’d read some men’s mag spy yarns in the past, but luckily the ones here were all new to me, and I was especially happy to see a few I’d looked for in the past. These stories reminded me of what I’d learned from the previous ones I read: the espionage yarns in the men’s adventure magazines were not really escapist fantasy in the mold of the James Bond movies; they weren’t even similar to the original Ian Fleming novels. For the most part they were much more “realistic” (comparatively speaking), with little in the way of exotic villains or sci-fi gadgets. For that, you’d need to look to the paperbacks of the day, particularly Nick Carter: Killmaster, Mark Hood, or Don Miles.
However that isn’t to say the stories here aren’t enjoyable. And indeed, two of them do have exotic villains and other Bond-esque trappings. But for the most part, the stories in MAQ #2 are similar to those in the vintage anthologies I mentioned above; Cold War thrillers with yank protagonists who go about their assignments with stone-cold professionalism. Speaking of paperbacks, the closest comparison I could think of would be the Sam Durell books; if you like those, you’ll certainly enjoy the spy yarns assembled here. Otherwise the stories follow the same template as most every other men’s adventure story I’ve ever read: a memorable opening (usually depicted on the splash page), followed by a flashback to how the characters got to this moment, followed by a hasty wrap-up. This is the template that the men’s mag editors stuck to, regardless of the genre. I mean seriously, they could’ve done a story on Jesus and it would’ve followed the same format.
As with Men’s Adventure Quarterly #1, the production quality of this issue is first-rate, with eye-popping visuals faithfully reproduced from the original covers and interiors throughout. Also the typeset is much easier to read than those original magazines, but one minor issue I had was that occasionally full-color art would be placed beneath the print on pages that were otherwise comprised solely of copy. This was never done in the original mags, at least none I’ve ever seen, and likely is a concession to our modern “more artsy” approach to printed materials. While it looks great, I personally found it made for difficult reading, like for example the cover of Colonel Sun (by Kingsley Amis) beneath the copy in the example below. But there are only a few instances where this happens; otherwise the print is nice and bold and, as mentioned, much more pleasant to the eyes than the original magazine layouts. 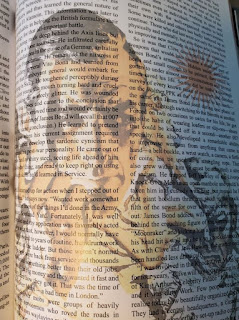 I've got both issues of this so far, and mostly the content's good. I think the layout's fer-shit, though. Too much fancying-around with it (such as the almost-unreadable page you mentioned) and too much commentary. I wish they'd just reprint more of the old stories and do a whole lot more shutting-up-already and spare us the "here's what we learned in magazine-design school" wankage. It's a lot of wasted space that could be filled with more stories. But, I'm glad to see this old stuff being made available in any way, so it's not even close to a deal-breaker, and they'll probably improve as they go.

Anyway, you might be interested in this, and it's cheap enough compared to a lot of these things - https://www.amazon.com/gp/product/B08FP45B1R/ref=ppx_yo_dt_b_asin_title_o04_s03?ie=UTF8&psc=1 It's from a company that reprints a lot of old comic books, monster mags, etc. They're basically photocopies, and mostly of stuff you could find PDFs of on the 'net, but they're bound nicely and it'd cost ya more to print them out yourself most of the time. Anyway, that has an old issue of Adam (not quite a "sweat" but the same ballpark, with fiction and a few bikini pin-ups), Front Page Detective, Hush Hush (which is more of a "gossip" mag than a real men's mag, but it's got Cassius Clay, "How I Got Nude Photos of Liz Taylor," etc. so it's not the usual women's-gossip mag), and a magazine called "The Girl Watcher" which is basically a how-to-be-a-creepy-stalker manual. It even mentions "stalker" as a "style" of girl-watching, and has an article on how to "collect" girls. Kinda creepy, mostly goofy. :) All full reprints with all the old ads in 'em. Wow, people were getting "ruptured" a lot back in those days. Half the ads are for some kind of truss. If you poke around you can find more tame-version-of-skin-mags and such. I've been buying a TON of old Eerie Publications super-gory comics from 'em (honestly, how can ya not? http://www.empire-of-the-claw.com/Eeriepubs_html/swampmonsters.htm ), but I figured you might wanna know about this one, and some of the others you can find in Amazon's "customers also viewed" section, if you hadn't seen them already.

(this is Zwolf, by the way -- for some reason ever since I swapped computers blog commenta aren't showing my handle, even though I signed in. Weird...)

Thanks, Joe! I appreciate your support and the detailed critique you always give to what you read. To Zwolf, all I can say is that we've received a lot of positive feedback on Bill Cunningham's creative layouts for the MEN'S ADVENTURE QUARTERLY and on my commentary in the intros to the stories, so you are in the minority on those things. But I appreciate that you both checked out the MAQ. So thanks and cheers! As Joe mentioned, MAQ #3 will focus on "Vigilante Justice" stories and will include two "Book Bonus" Executioner stories by Don Pendleton, intros by Don's wife Linda and Chuck Dixon and more.

Hi, Bob. I'm always VERRRRY comfortable being in the minority. :) Gotta call 'em like I see 'em! Take it as constructive criticism (which is how I intended it) or ignore it if you're satisfied as-is, it's okay. Either way, I'll still be buying the future volumes, and have almost all of y'all's books, so "could be better if you changed a few things" shouldn't be considered "it's bad." Just saying less would mean more, I think. For whatever my opinion's worth. :) Anyway, glad y'all are putting the mag out.

Zwolf - No worries! I appreciate your support for my labors of love -- and your constructive criticism. In this case I don't agree with your criticism, but I'm used to being in the minority myself. Hell, I publish books full of politically incorrect stories and artwork that most people are unaware of or dismiss as completely unworthy trash. ;-)

Hi guys - Just chiming in to echo Bob's comments. We appreciate the feedback. If anyone ever has any feedback on the MAQ, men's adventure fiction you'd like to see, or if you just want to ask a question you can always email us at MAQeditor@gmail.com.

As far as my "style" goes, I am going to refer to my Dad's advice, "if you aren't pissing someone off, you aren't doing it right."

Take care, and thanks for caring enough to weigh in... Bob & I appreciate it.

If you could, Bob & I would appreciate you posting a review on Amazon. An edited version of this is fine. You should also mention you're the man behind this blog.

Hey everyone, thanks for the comments, apologies for the delay in response. Zwolf, the craziest thing is that I was halfway through your comment and thinking to myself, "This sounds like Zwolf!" So you have a distinctive writing style...or I've just become familiar with it after all these years! Thanks for the note on those reprints. Bob and Bill, just to confirm what I wrote above, those were just my thoughts on the print slightly being obscured by the art, but doubtless many would disagree. Hell I'm having a hard enough time reading as-is with these new contacts my optometrist prescribed me with! Looking forward to #3! And I hope to have a review of The Exotic Adventures Of Robert Silverberg up within the next month or two!