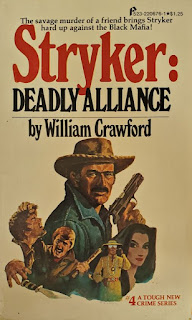 I'm surprised to discover you have reviewed only one (1) STAR TREK novel, Joe! Though I can understand your reticence to continue after enduring the horror of a Marshak/Culbreth book. Now I'm curious what other TREK books were in that stack you bought.

Hey Marty! You're right, I still haven't gotten back to any of those Star Trek novels, likely just put off by this one. The ones I got are: Fate of the Phoenix (the sequel to this one, and I recall I at least started to read it years ago...), Black Fire, Yesterday's Son, Spock Must Die, and also a Shatner bio by Marshak/Culbreth titled "Where No Man." That one sounds the most promising because it seems to be "very '70s." Per an Amazon reviewer, it's an "overly shallow attempt at Californian sexual pseudo-psychobabble." Sounds like a ringing endorsement to me! Thanks for the comment, good as always to hear from you!

Oh man, you really should read that Shatner "bio." You will hate it/love it (I'm sure you understand what I mean). It's perfect for this blog.