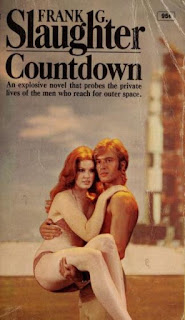 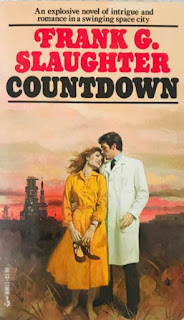 Interesting, I include it in my huge waiting room.

Hey Joe! This took me back to a time many years before Slaughter wrote ‘Countdown’. I was probably 7 years old and starting to get interested in the bookshelves in our basement. Lots of random books; many from my grandfathers’ apartment and many given to my dad by coworkers. There were 3 or 4 Frank Slaughter paperbacks; I remember “Air Surgeon’ and ‘The Scarlet Cord’. The covers would probably be described in the then late 1950’s as ‘lurid’. I leafed through them looking for some explanation of what the covers hinted at. I don’t believe that I read any cover-to-cover.
I also found a couple of Dale Van Every paperbacks about the American frontier. The covers on them were even better: nubile Indian maidens and lonely-looking frontier women hanging on to buckskin-clad mountain men. I read a few of them and wasn’t disappointed. One was titled ‘The Shining Mountains’. The main character was a trapper in the Rockies. I also read a couple of Harold Robbins’ books that were passed around in high school later on. Now those really qualified as Glorious Trash!

Thanks for the comments, guys -- and Lt. Zogg, really enjoyed your note! I'm not familiar with Dale Van Every, so thanks for the info.