Adrano For Hire #3: The Swiss Shot 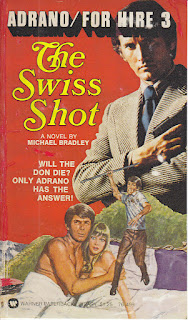 The Adriano covers are kinda funny. Steve Holland is the model for the main character in the painted scene at the bottom in #2 and #3, but he's not the guy with the corduroy jacket, which looks like a photo. I guess the Art Director figured nobody would notice.