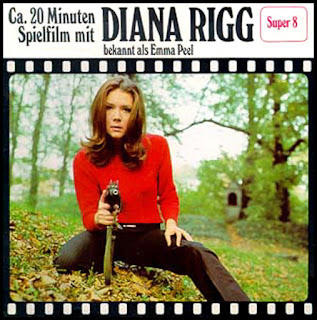 Great review, I finally understood what "minikillers" is.

Thanks for making me aware of these bizarre little films and for your very thorough descriptions.
These are all on YouTube. Search Minikillers.
I’d comment that these were definitely not shot on 8mm film, probably 35mm, perhaps 16mm, but they look a bit too good even for that.
If they’d been shot in 8mm they’d look very contrasty, low rez and mushy. They look just as good as any of The Avengers episodes made in the 60s.
Diana Rigg is gorgeous and riveting on screen in these. Climbing into the row boat in a flesh colored bikini is especially memorable.
Thanks again for the post!