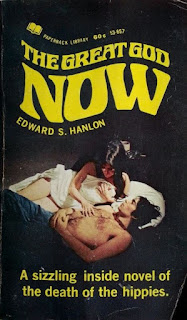 This slim paperback wins the award for most prescient novel of 1968; published over a year before Altamont and Manson, it predicts the end of the hippies, yet at the same time also predicts that they will have a greater impact on society than the Beatniks or earlier youth movements. But unlike Happening At San Remo there’s no sense of judgment or scorn; as the first page promises, The Great God Now is written by someone “inside the movement.”

I can’t find out much about Edward S. Hanlon, but judging from imdb.com he acted in two tv shows in 1960 and then published five novels between 1965 and 1970. His writing isn’t bad and the book is very much on the “literary” tip, with lots of images and metaphors and all that fancy jazz. He does however stuff too many characters into such a slim book, with the result that some get sort of lost in the shuffle. My assumption is he was writing to a strict word count per the publisher.

“Who killed the love generation?” asks the back cover, going on to list each character as a suspect, as if this were the novelization of the worst ABC Mystery Movie of all time. Humorously the back cover fails to mention the two most important characters: Leo, a guy in his 30s who writes for an underground paper and who serves to judge the hippies from a historical viewpoint, and Arion, handsome long-haired hippie “leader” who is seen by the others as almost the living embodiment of love, who himself turns out to be much older than suspected. Taking place in “New York’s ultra-chic East Village,” The Great God Now occurs over just a few days, save for a final chapter that shows where most of the characters end up some months later.

The main plot has to do with the temporary release of gorgeous actress Dana Hunt from a women’s detention center in New York; she’s been in jail for the past two weeks, having been arrested for fondling herself on camera for an underground film, and held without any other grounds all this time as a warning to other lawless hippie types. But she’s being let go for just a few days to visit her father, a famous poet who is on his deathbed. Dana’s friends, who turn out to be the cognoscenti of the East Village’s hippie community, debate what they should do about all this, as they’re certain it’s a trap and the Man expects Dana to jump bail so they can bust hippie heads.

They all live in the same mini-commune in the Village: in addition to Arion, there’s John and Vicki, a married couple who have a toddler son named Allen (named after Ginsburg); Carla, a “hippie social worker” who doesn’t get much narrative time but is revealed to be self-serving; Susan, a young hippie girl who ran away from home and laughs about all the desperate pleas her parents have published in papers, asking for details on their daughter’s whereabouts; and finally Christopher, a filmmaker who doesn’t give a damn about the hippie movement and just wants to exploit them – and Dana’s imprisonment – as his ticket to Hollywood stardoom.

Looming over them all is the spirit of Running Star, an American Indian folk singer who, we gradually learn, was beaten near to death by the cops in the Village several months ago when heroin was found in his guitar. Running Star’s arm was mangled beyond repair, his face destroyed, and he went nuts and is now locked up in the Bellevue asylum. We’ll soon learn that Christopher planted the heroin in Running Star’s guitar in the hopes of starting a riot – which he did – so he could capture it on film. Christopher hopes to create the same disturbance with Dana, and thus implores her to skip going to see her dad and stay here and finish the film; ie the film she was arrested for doing in the first place.

Not much actually happens per se in the novel; it’s mostly comprised of the various characters sitting around and plumbing their thoughts, or grappling with Weighty Issues with other characters. One of the chief concerns of the novel is the changing times, how the hippie movement will have a limited shelf life. I found this very prescient…I mean when I think “hippie” I think Woodstock, and that was well over a year after this book was published. So the hippie thing hadn’t even reached its peak yet, so to speak. Many of the charactes, Dana in particular, wonder where they will be in ten years – with the omniscience of reading this novel 50+ years after it was published, I naturally assumed that by the late ‘70s they would be snorting coke and following various self-help fads, a la The Serial.

There isn’t as much psychedelic or drug stuff as you might expect. I think the most that happens is Dana smokes a joint upon release from custody and then engages in a pages-long sex scene with Christopher. Here Hanlon skirts the line between “literary” and “sleaze,” in particular when Dana gives Christopher a b.j. that goes on for like pages and pages – and all of it filtered through Dana’s drug-altered thoughts. Perhaps the only book in history to compare a guy’s junk to a skinned rabbit, folks. There are also random mentions of an LSD trip Running Star took with Dana several months ago before they too had sex – actually the sex scenes are mostly all filtered through Dana’s thoughts and memories. (For fellow pervs taking notes, the only other dirty stuff is some makeup sex between John and Vicki, late in the novel.)

Hanlon occasionally gives us some of Running Star’s lyrics, but they’re just straight-up “poetry” with no rhymes, not even broken up into lines, so I can’t see how they would fit into any sort of music…he’s clearly in the early Dylan mold but augmented with some “Native American wisdom” attributes. We’re to understand he and his thoughts are dangerous to society, which is why the cops took such joy in stomping him to pieces. However Running Star himself never actually appears in the narrative, other than in flashbacks – but then, much of the book is comprised of flashbacks, of how such and such a character grew up in a stifling but privileged environment and then ran off to be with the freaks in the village. In some ways the novel can be seen as a counterpart to Father Pig, but here we’re given the reasons why the kids ran off in the first place.

While Dana and Christopher get busy, Arion heads up a discussion group downstairs to determine what needs to be done about the situation with Dana’s return. It seems certain that “the Man” expects Dana to jump bail, after which the pigs will storm in again and it will be like the mess with Running Star all over again. But here we learn that Arion suspects Christopher of having set up that fake drug bust with Running Star in the first place, and further he’s sure he again has something up his sleeve. Christopher, who of course is the villain of the piece, is given his own brief backstory, in which we learn his mother, a famous Hollywood costume designer, was fired in the McCarthy years for being a Commie. Christopher has vowed to take over Hollywood some day, no matter the cost, even if it takes a film of hippies getting their faces stomped in.

Dana by the way gives us the title: “The sixties were a now time,” we’re informed via her perspective as she walks through the Village upon her release from the pen at the novel’s start. And, “the past and the future bow before the great god Now.” I found this focus on the passage of time to be the most interesting facet of the book. Hanlon and his characters know beyond doubt that the hippie era has a limited lifespan, but again it’s not treated with a sort of condescending air; it’s more along the lines that all great societal trends are doomed to abrupt deaths. Leo is the character who gives this the most historical perspective, mostly due to his personal time with the Beatniks a decade before; he also notes that the hippie movement hasn’t had a literary great, like its own Kerouac or whatnot. Interestingly, no one seems to understand that the rock groups of the day will have the biggest impact on the arts.

The other characters have their own limited subplots; John and Vicki have the most focus, given that John’s father, who is planning to run for the Senate, announces to John over dinner that he is taking away young Allen. He accuses John of taking drugs and being a filthy hippie and bringing Allen up in a poor environment (indeed, Dana and Christopher smoke a joint and screw mere feet away from the sleeping boy…but at least they have a curtain around their bed). Foolishly he tells John he’s coming to take the kid tomorrow, so after much deliberation – John and Vicki are having marital troubles, due to Vicki’s need for John’s dependence, which has waned these past months since Runing Star stayed with them – the couple decides to high-tail it to Mexico with Allen. John too is gradually shorning his hippie image, and his character serves to represent what Hanlon suspects will happen to real-life hippies, soon enough: they’ll grow up.

The climax, such as it is, sees Arion getting confirmation that Christopher was behind the Running Star bust, and also that Carla assisted in the plot. So the two characters are outed before the others, and a late-introduced rocker named Devlin, singer for The Heavenly Bodies, takes justice into his own hands. His own hastily-sketched backstory has it that he was a streetfighting Chicago punk before he found peace and all that; another recurring theme is that, despite their hippie, peace-loving makeovers, none of these characters will escape their original makeup.

After this Hanlon cuts forward a few months, with the revelation that Arion and others have already left the Village, with John and Vicki being the trendsetters in the evacuation. Carla meanwhile is thriving, now running various shelters for the blacks and Puerto Ricans who are moving into the area. But then she was never true hippie to begin with. And Arion’s living out in the midwest under his original name, which is the true sign that the hippie thing is dead.

Overall I found The Great God Now mostly entertaining as I read it; Hanlon definitely has a skill with words, and he brings his characters to life to such an extent that you somewhat care about their troubles, no matter how insignificant they ultimately seem to be. If I’d read this one several years ago when I was on a “hippie literature” kick I probably would’ve dug it even more. But so far as that subgenre goes I’d still rank Lee Richmond’s High On Gold (1972) as the best.
Posted by Joe Kenney at 6:30 AM

Just discovered your blog, really enjoying it so far! I had a general question, what are your reading habits? Such as when do you read and for how long in a sitting? You seem to power through a mountain of books!