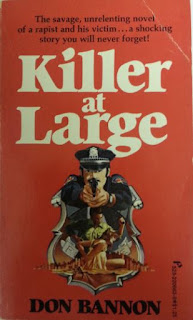 Back when I was collecting these BCI Crime Paperbacks I tried to find out who had written this one, but no info was available; “Don Bannon” wasn’t listed anywhere, even in Hawk’s Authors’ Pseudonyms. So I assumed it was written by William Crawford, given the similarity to Crawford’s BCI crime paperback The Rapist. Now, finally having read Killer At Large, I can say with complete certainty that it is the work of Manning Lee Stokes. It’s his style, with solid prose but padded plotting, ten-dollar words, recurring phrases and situations from previous novels, and even the trademark in-joke character names (“Doctor Engel,” ie book producer Lyle Kenyon Engel, and “Superintendent Stanton,” ie Stokes’s pseudonym “Ken Stanton” on The Aquanauts).

Trading on the same sleazy vibe as the other BCI crime paperbacks, this one’s about a serial rapist named Billy Starret who breaks out of prison and goes on the hunt for one of his previous victims, a policewoman named Marion McManus. She collared Starret five years ago, getting raped and her back broken in the process (it happened in the subway, and she fell down some stairs while trying to escape). Starret vowed revenge at the trial. Meanwhile, in the undisclosed city in which all this occurs (we learn at least it isn’t New York or Los Angeles), Marion heads up a newly-formed Sex Crimes Unit that’s intended to get a handle on the city’s increasing number of rape cases.

The main protagonist is 27 year-old Sgt-Detective Rick Preston of Vice, fairly new to the force but rising quickly in the ranks. We’re informed he’s a hunk of a man with tons of women at his disposal, and at novel’s beginning he’s wondering if he should give it to the clearly-willing new policewoman in his precinct, Priscilla Foxx. A pretty blonde with a small-but-shapely figure (we’re often reminded), Priscilla is the one who tells Rick about the new SCU team and also that she’s heard on the grapevine that Rick is going to be co-running it, which is news to our hero. She also begs him to transfer her to the unit, as she was raped as a teen and wants to help crack down on the rapists out there.

Preston brings along his current partner, grizzled Charles Kuttner, but argues with his captain when he’s ordered to also bring along Tom Varantz. New to this particular division, Varantz has a bad rep and is seen as a problem; he was basically kicked off his previous unit. Preston’s captain wants to get rid of Varantz by sending him along with Preston to the SCU. In addition there’s a towering, muscular policewoman named Cordellia who might be in love with little Priscilla Foxx, and who berates Preston for putting such a “green” female cop in the unit. And commanding the SCU is beautiful but icy cold Marion McManus, of the “stiff manner and even stiffer back.” Oh, and Marion’s partner that night she was raped five years ago was none other than…Tom Varantz, who sent her out to waltz along the subway as rape bait and then went off to get drunk, not providing the cover he’d promised her.

Yes friends, this motley crew of misfits is intended to reign in the rape epidemic; one gets the impression they’d spend most of their time fighting each other. SCU HQ is an old fire station, with the men on the first floor and the women up on second, with even the pole still there for them to slide downstairs. Surprisingly though, Stokes does very little with the actual SCU setup, as the novel quickly becomes more concerned with two intertwined elments: Rick Preston falling in love with Marion McManus upon first glimpse of her, and Billy Starret’s escape from prison and the gauntlet formed to protect Marion from him. There’s also an arbitrary subplot about Rick going out on a limb to help an old friend of his, a black high school teacher named Ray Foster who has been accused by a slutty white trash student of grabbing her boobs. This stuff is so incidental to anything that you wonder why Stokes didn’t fill those particular pages with more-appropriate material like, you know, the SCU handling rape cases. But then that’s Stokes for you. I was more impressed that this time he actually resolved this particular arbitrary subplot, even tying it into the main plot.

Killer At Large features all those typesetting tricks Stokes employed in his latter novels: bulletins, various memorandums, teletype twixes, transcripts. Some of it, as usual, is as egregious as can get, like when Rick reads a pages-consuming report on the objectives of the Sex Crimes Unit. But anyway I mention this here because the novel opens with a lengthy digression on Billy Starret’s past, all courtesy the prison psychiatrist who brefriends him. But again surprisingly Stokes actually works this stuff into the narrative, much later on, in particular the nugget of information that Starret has a security uniform stashed in his parents’ home. It by this novel means that Starret will be able to elude the police dragnet out looking for him; we’re informed many times that the average person develops a blindness to a man in uniform, automatically seeing him as a cop.

We find out Starret has escaped in the first quarter of the book, and initially I was surprised because it seemed as if Stokes left the event off page. “That’s not the Manning Lee Stokes I know,” I thought to myself. Sure enough, the next chapter reverted to Starret’s perspective and spent 31 whopping pages detailing his escape, step by step. Long story short, Starret makes a box kite and flies it off the prison in the middle of a blizzard, almost killing himself in the process. He kills a guard and later rapes and kills a woman whose house he breaks into, seeking refuge from the blizzard.

I always get the impression Stokes was chomping at the bit to get sleazy, back when he was writing in the ‘40s and ‘50s (like in The Lady Lost Her Head); here he goes Full-Bore Sleaze, because the unfortunate woman happens to be a hotstuff horny housewife whose husband is away for work, so she gets drunk, dresses up in garter belt and stockings, and screws herself with a cucumber in explicit detail…and Starret happens to come upon her house, sees the light inside through a window, and starts watching her. Stokes keeps the rape-murder off page, however, but word gets to the SCU and they know it’s the work of Starret.

Stokes doesn’t get lost in the details of police beauracracy, yet at the same time this isn’t an action-packed roller coaster like Crooked Cop. In fact, Rick doesn’t even pull out his gun until the final pages. We get a few brief summaries of some rape cases the SCU handles, but for the most part the focus is on Rick’s sudden love for Marion, a love he keeps to himself. When word gets out that Starret has escaped and Rick learns she was raped by him five years ago, he pulls strings to be put in charge of the case. At this point the subplot about Rick’s old friend, Ray Foster and the white trash girl who has accused him, sort of falls by the wayside. Here Rick also learns, again via Kuttner, that Varantz was Marion’s partner the night she was raped – and meanwhile Kuttner’s found out why Varantz is so hated by fellow cops. He’s a coward, as Kuttner found out first-hand during an off-page collaring of an armed rapist.

As with practically every other Stokes novel I’ve read, I realized over halfway through Killer At Large that hardly anything had happened in the narrative, yet regardless I was sufficiently caught up in it. I get the impression Stokes put a bit more of himself in this one. He certainly doles out some memorable lines: “Now let’s go see if we can find the character who likes to cornhole little boys,” “…a guy can’t chase freelance cunt all his life,” and this jawdropper: “So what’s it going to be, Lisa? Drop the charges and forget the whole thing? Or let your parents find out you suck cocks in a junkyard?” Special mention must also be made of this line, which is one of the greatest I’ve ever encountered, both silly and profound, both stupid and cool: “He was now less than a minute from his future.”

Things all come together during the climactic search of the aforementioned junkyard, where Stokes resolves both the Ray Foster and Tom Varantz subplots. The former via the deus ex machina discovery that white trash “victim” Lisa is such a frequent visitor to the junkyard, sucking off various guys, that the proprietor has started charging the guys who come see her; this elicits the unforgettable line above, as Rick successfully blackmails her into dropping the charges against his friend Ray. However Stokes leaves it a mystery whether Ray really did grab her, as Lisa sticks to her story despite being outed as a cheap whore. As for the Varantz subplot, Rick takes the opportunity to beat him up and tells him he’ll beat him up every day until Varantz quits the force!

Stokes dwells in more uber-sleaze in a later chapter which sees a member of the SCU making a heroic sacrifice, after which Starret’s uniform is ruined. We barrel right through the finale, with Rick and Marion racing to bring down Starret before he can rape Marion’s sister as a proxy for Marion herself, and to do it rogue before the rest of the force finds out this is what he plans to do. In other words they both want to kill him, not arrest him. However the climax is a bit too harried, and I would’ve preferred a slower payoff on Starret’s comeuppance.

This was an enjoyable one, better than some of the other BCI Crime Paperbacks I’ve read and certainly one of Stokes’s better novels. Here’s hoping he wrote some more of these for Engel – I still haven’t been able to figure out the authorship of all of them, so some of them might turn out to be more Stokes yarns.
Posted by Joe Kenney at 6:30 AM

Interesting review, that little detail about the 'generic American city' reminded me of a novel I'd once read entitled 'Siege of Superport' written by someone called J. Bradford Olesker. The novel was copyrighted 1978 and published by Sphere.

Plot involved terrorists taking control of an off shore oil unloading platform and demanding a huge ransom. What really stood out is that the city it was taking place off was totally de-identified, quite literally the story could have taken place off any major US port city.

As with most of these things the best part was the cover with a guy standing on the back of a WWII U-Boat blazing away with a sub-machine gun at police helicopters.

I've always wondered if it was a film script that didn't sell so it was turned into a novel to make a quick buck. Now I'm not so sure.

Graham, on a hunch I decided to check if “J. Bradford Olesker” could be “Jack Olesker,” writer of many cartoon episodes from my childhood, and yes he is! According to Jack Olesker’s official website, “Novels” section, he did write The Siege of Superport (1978).

Sounds like he’s a nice guy, too! From a profile by The Times of Northwest Indiana (where he now lives):

“When this girl said this to me, it touched my heart,” Olesker said. “To touch people’s lives is the most wonderful thing of all. My truism is we (writers) are all nothing without fans. So it’s the fans that we owe our gratitude.”