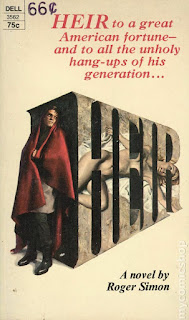 Roger Simon, who later in the ‘70s would have a hit with The Big Fix, the novel that introduced his dopesmoking PI Moses Gunn, here turns in more of a literary sort of affair – actually it storms right over the “literary” line and right on into the pretentious zone. I’ve never read the Moses Gunn books but they have to be written in a different style than the self-conscious, overly “artsy” vibe of Heir.

Purporting to be the journal of Marcus Bottner, the “heir” of the title, the novel is told in an almost stream-of-conscious style as Marcus, in his early 20s, informs us how he’s just accidentally killed his 18 year-old girlfriend, Jennifer. This happened because he gave her a shot of heroin to counteract an overdose of amphetimines. Now Jennifer’s corpse sits in a tub of ice in Marcus’s bathroom in his apartment overlooking the Hudson here in New Jersey. The “journal” takes place over a few days as Marcus deals with his new life as a criminal – an idea which attracts him – while trying to figure out how to dispose of the corpse.

The only problem is, Heir sort of comes off like it’s narrated by Niles Crane from Frasier. Marcus however doesn’t even have a single likable quality, so from the outset the reader is already annoyed with him. Luckily the book’s short, just barely over 150 pages, so we don’t have to put up with him too long. Marcus we’ll learn was born into vast wealth, mostly due to the inheritance left behind by his racketeering grandfather, Max. Marcus, a rich kid with literary aspirations, feels akin to William Burroughs, who similarly was born into wealth thanks to the Burroughs typewriter.

And there’s the other whammy – not only is Marcus an annoying effete, but he also wants to be an important author, and studied writing and all that jazz. So there’s this self-reflective, self-conscious vibe to the whole book, which again is mostly just comprised of Marcus’s journal, which he hopes to sell someday under a pseudonym, or perhaps move to another country and have it published there. But otherwise Heir is filled with pretentious stuff like Marcus writing about something and then stating “Excuse me a moment,” with the next sentence being written “later” and with an explanation of what disturbed him as he was writing.

To make it worse – hardly anything happens. Marcus (or should I say Simon) constantly stalls forward momentum with digressions about how he met Jennifer, his relationship with her over the past two years, his childhood, or various other incidents in his privileged past. Only occasionally do we cut back to the main plot of the tale, but even here it’s a slow-going affair – mostly talks with his cousin, Selma, who does PR for rock groups, and Ornstein, his childhood friend who similarly has literary aspirations and who is writing a play about a character modeled after Marcus.

Oh and Marcus keeps his room at near freezing levels, but when this proves unfeasible he hides Jennifer’s corpse in an antique harpsichord – he’s taken it apart, stashed the corpse in there (covered in a sheet and spritzed with perfume), tossed out the “guts” of the harpsichord with the trash, and re-assembled it, all off-page. This leads to the novel’s sole bit of humor when Selma and a psychiatrist she’s retained visit Marcus in his freezing apartment and he bluntly tells them he’s killed his girlfriend and hidden her body in the harspsichord; a confession that’s taken as delusional fantasy.

But as mentioned the meat of the book is more concerned with arbitrary, digressional flashbacks on Marcus’s time with Jennifer in Europe, his past experiences with her; turns out she was a bit of a bitch, hitting on guys and sometimes taking them home right in Marcus’s presence. There’s also a bit on their growing fondness for drugs, with Jennifer introducing Marcus to grass – more elaborate backstory on how he scored a big haul to impress her early in their relationship – and later to heroin. The drug stuff isn’t as prevalent as the cover implies, though Marcus does shoot up during yet another lunch date with his cousin Selma.

Marcus I guess is intended to represent his generation – something he ponders in his navel-gazing narrative – but it does get to be a bit wearying to accompany him throughout the novel. He puts on the expected show of judging the older generation, protesting the war (he even goes to an anti-Nam rally with Ornstein) and supporting all the new liberal ideas of his youthful generation, yet at the same time of course he’s a self-obsessed murderer and heroin junkie. Of course this is likely Simon’s intention, but as I say the schtick wears thin after a while. The novel too clumsily straddles the line of social commentary and crime thriller.

Eventually Marcus truly confesses to Ornstein (another important moment kept off-page) and gets his support in dumping the body; Ornstein’s suggestion is the Hudson. This leads to a comedy of errors as Marcus stashes the corpse in the trunk of his car and pulls up to an isolated spot, only to be confronted by a group of Hell’s Angels who try to rob him before a cop shows up. A panicked Marcus drives off on various interstates and is again stopped by the police for not paying a toll. This cop in particularly is almost humorously anal-retentive, going on about how important it is for motorists to pay tolls, but Marcus is eventually able to drive off, Jennifer’s corpse undiscovered in the trunk, which is where he decides to keep it.

Toward the end we learn all this takes place in June of 1967, and there is one part that taps into the cool stuff of the day – namely, a heroin-high Marcus finds himself in a bona fide “psychedelic discotheque!” Here he dances with a “Eurasian girl” while colored lights splash on the walls and floor and whatnot. Speaking of good-looking gals, Marcus is curiously asexual…there’s zero exploitation of the few female characters and his flashsbacks of Jennifer are all sexless. Otherwise Marcus has no interest in the modern era and doesn’t like rock music or anything; again, the image is more of a young but still stuffy Niles Crane.

To make it all even worse, even the climax is rendered off-page; the last entry of Marcus’s “journal” is an excruciating bit of stream-of-consciousness that comes off like Rudy Wurlitzer’s Nog or Brian Aldiss’s Barefoot In The Head; unfortunately, here all the “big” stuff happens, like Jennifer’s corpse finally being discovered and Marcus being arrested, yet the gibberish prose sucks out all the drama and suspense. After this we get an even more excruciating chapter, this time courtesy Ornstein who relates how Marcus’s trial goes down and whatnot, but it too is so self-conscious and intentionally “literary.” But basically Marcus is arrested and tried on grounds of manslaughter and will spend the next few years in prison and under psychiatric care.

Anyway, Heir I guess is promising so far as the author’s talent goes, but the novel itself is unsatisfying; perhaps this is why the book fell out of print after this paperback edition and has, apparently, stayed that way. And speaking of which, this is another one that seems to go for absurd prices these days – I don’t even see this paperback edition listed anywhere – but I’d say the high prices are not justified by the actual content. Just get the original hardcover via Interlibrary Loan if you really want to read it.
Posted by Joe Kenney at 6:30 AM