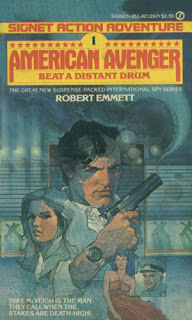 Signet Books got in on the early ‘80s men’s adventure boom with American Avenger, which ran for five volumes and sported nice cover artwork. Unfortunately the titular character does not wear a Captain America-type costume, operate under the codemane American Avenger, or hell even wear a “USA” t-shirt at any point in this first novel…my asssumption is the series title was all courtesy Signet books, because otherwise the author himself is content to dole out a Robert Ludlum-esque thriller. The cover slugline “suspense packed international spy series” is more applicable to the actual content of the book.

As ever a big thanks to the Spy Guys And Gals site for the info that “Robert Emmett” was the pseudonym of a writer named Robert L. Waters (this series is so obscure it doesn’t even get a mention in Brad Mengel’s Serial Vigilantes of Pulp Fiction). This explains the otherwise perplexing copyright of the book: “Waters Development Corporation of Broward County.” The book ends with a quick author bio which states that “Emmett” is the pseudonym of a former Air Force Intelligence officer who now lives in a small town in Florida…so then it’s Robert Waters of Broward County, Florida, hence the intentionally-goofy copyright.

Mike McVeigh is the hero of this series, a former Air Force Intelligence officer (hmmm…!) who has the usual studly looks of men’s adventure protagonists, only he has “shocks of white” in his black hair. But McVeigh’s nebbish cover guise has him hunching his shoulders and wearing thick glasses. He’s also an engineer, which means that his usual assignment has him going undercover and posing as such. So this setup alone is proof that this will not be a slam-bang sort of series. Oh, and McVeigh’s background, which turns out to be incidental to anything at all, has it that his mother was a Seminole princess. WTF? About the most we get out of this is McVeigh’s occasional condemnation of “the white man,” even though he himself is half-white…one of the curious prerequisites of these early men’s adventure series was that the protagonists had to have some American Indian blood or have been raised by Indians or whatever.

The plot of this first novel promises more of a sci-fi scenario than what is delivered; Walt Rosen, “dirty tricks” chief at the CIA, is given a report that a “particle beam” weapon has recently been fired at the moon. Who did it is a mystery, but Rosen suspects the Russians, of course (again, you can blame ‘em for anything…you don’t even need any evidence!). They’ve got some mining facility outside Berlin or something and that’s where Rosen figures the newfangled particle beam gizmo is. So Rosen does exactly what the reader expects…assigns Mike McVeigh to pose as an elevator designer at a Russian-owned company in Berlin!!

At this point the reader notices that the book runs to almost 190 pages of small and dense print, and wonders if perhaps there might be another novel to read instead. But there’s that promise of the moon-firing laser thing… But sadly the author is determined to turn out a “realistic” novel of spycraft, sprinkled with only the occasional bit of action – which by the way is mostly bloodless. There’s also some dirty stuff here and there, but even it is mostly handled in a conservative tone. Again the vibe is more of Ludlum or some other mainstream thriller. And by the way if you’ll notice, McVeigh isn’t even “avenging” anything in his assignment. It’s pretty sad when the first volume already puts the entire series concept in question.

McVeigh, who comes off in total cipher mode throughout, goes to Berlin under the cover name Dick Pelt. Seriously. Dick Pelt. There’s a lot of stuff about the East Berlin company “Pelt” is to construct an elevator for, as well as commentary and travelogue on Berlin. We also get a bit of sex action courtesy Lisel, hot secretary who is actually a spy for SSD, aka the Ministry for State Security. Her job entails screwing various bigwigs and secretly filming it, all under the comand of her Rosa Klebb-esque superior. Her expected sex scene with McVeigh is timid with the details and in fact happens off-page. The novel’s sole bit of humor has McVeigh feigning shock when, as “Dick Pelt,” he watches his sexual activities with Lisel onscreen, but secretly McVeigh wants to ask her for a copy of the tape!

One thing about McVeigh is that he keeps killing people without intending to; he takes out one of the BfV (aka German FBI) agents who jump Lisel and him one night. This all means that Lisel’s cover is blown, so the two escape on various planes and stay in airports and other page-filling banalities, only to return to Berlin…and for McVeigh to be promptly captured. At length he’s taken over to East Berlin and onto an expansive estate which we’re informed by egregious backstory was once owned by the Nazis. Here resides Marshal Kurkov, the Russian who wanted “Dick Pelt” to design his elevator. Kurkov has a sexy secretary of his own, Kebrina. This one we’ll learn is a KGB agent dubbed the “Golden Amazon” by her colleagues, due to her incredible looks and physical stamina, in particular in bed.

Kurkov is indeed the guy behind the particle beam weapon, which he’s dubbed the Devil’s Ray. But still the author denies us any pulpy stuff. Instead, the plot’s all about Kurkov wanting to defect to the US, hence his request for an American contractor, in particular Dick Pelt – for the real Dick Pelt is the son of a man with a lot of governmental clout in the US, and thus could help Kurkov defect. We get way too much arbitrary backstory about Kurkov, both in narrative and in dialog…even Kebrina fills in unecessary details on him for McVeigh. Also Kebrina is Kurkov’s daughter, even though she doesn’t know it, and Kurkov insists that McVeigh bring her over as well, even though she’s also unaware of this.

We also get the expected McVeigh-Kebrina conjugation, but this one too is kept off-page for the most part. We do at least get an actual knockdown, dragout fight to the death between McVeigh and Kebrina, something that usually doesn’t happen in the genre (usually another woman or some other quirk of fate takes out the female villain). This happens during a failed attempt at smuggling Kurkov over the Berlin Wall; it’s a setup, and McVeigh ends up fighting for his life against the “Golden Amazon.” Kurkov meanwhile is gone, which makes all that page-filling backstory on him so frustrating…honestly I hate it when authors waste time on backgrounds for minor characters in series fiction, ‘cause it’s a series, you know – we’re never going to see them again, so who cares??

The final quarter sees McVeigh reunited with Lisel, who turns out to be the member of an underground resistance movement. McVeigh’s got the blueprints for the Devil’s Ray, and Lisel promises to turn them over to the various media outlets so everyone will have them and one country won’t capitalize on the destructive technology. They spend some time at a members-only spa where they engage in more hot (off-page) lovin’, before we get to the overlong climax, which sees McVeigh, Lisel, and comrades escaping Berlin via train, which they take right through the Wall.

Overall Beat A Distant Drum (the title being a reference to the mission name McVeigh is tasked with) is just too bland and padded…if you’re into Ludlum or other writers who stick to realistic Cold War details, it might be more your thing than it was mine. I’ve only got one other volume of the series (the second one), and this first installment didn’t have me chomping at the bit to track down the remaining three.
Posted by Joe Kenney at 6:30 AM

Surprised to hear this series is obscure, because I've seen them several times in used book stores. I don't remember if I ever bought one (I usually stay away from '80s men's adventure), but I'm sure I haven't read any.

I recently traded this with another men's adventure paperback collector based on a suspicion that the time invested in reading it would be wasted. Looks like I made a good call. Thanks for the review!

The most interesting thing is that you can appreciate the influence that the work of Ludlum had in the 80s, like the one that Fleming had in the 60s or Forsyth in the 70s.