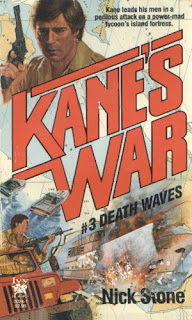 It’s been so long since I read the first volume of Kane’s War I had to go back and re-read my review. Good grief, I had to bail on it halfway through – I must’ve had a helluva lot more free time back then. Well anyway, I don’t have the second volume, but as John Lennon said, it’s “nothing to get hung about.” This doesn’t appear to be a series with multi-volume storylines; in fact, I’m not even certain the same author wrote this one. Even though it’s the same exorbitant page count as the last one (nearly 300 pages!), it’s got massive print, and also the “marinara mystery” vibe of the first volume isn’t as prevalent.

Also, hero Ben Kane fares slightly better. As we’ll recall, he spent the majority of that first volume getting knocked out and recuperating in the hospital, and even dropped his own gun in the climactic action scene. That being said, Kane still manages to get knocked out and captured in the very first action scene of this installment, but afterwards he handles himself much better. So who knows, maybe it is the same author, just with a lesser word count, so less of a need to pad pages; as it is, Death Waves sort of rolls along and is much pulpier than its predecessor, featuring mind-controlled soldiers and a Bond-esque super villain intent on world domination.

One thing I’m not sure about is if the second volume introduced Kane’s latest girlfriend, Karen, but I’m guessing not; even though she’s introduced to us cold, as if we’re to understand she’s Kane’s latest steady woman, later on it’s explained that she’s come down here to the Virgin Islands for a brief vacation before she starts work on Mica Island, a closed-off retreat owned by mega-wealthy Ted “Link” Mica. But when we meet Karen at the start of the book she’s about to become something else – the latest victim of white slavers who are operating here in the Caribbean and who have kidnapped several other lovely young ladies.

What itself could provide the main plot of the book instead becomes the obligatory “opening action scene,” as Kane tracks down the missing Karen to a desolate island and decides to go in alone, no weapons or anything. But it’s a return of the clumsly bufoon from the first volume, as he’s knocked out and captured posthaste. We don’t get too much info on these white slavers – they’re mostly just presented as modern pirates of Middle Eastern descent – because soon enough attack helicopters land and soldiers in black uniforms get out and decimate them. Our “hero” stands and watches as some newly-introduced group of characters come in and handle the job he was supposed to do himself.

What Kane finds most odd about the situation is that the black-uniformed soldiers operate almost like robots; there is no emotion, no reaction to getting shot, even. Even odder is the dude commanding them – Ted Mica himself. This, he casually explains to the freed Kane, Karen, and other hotstuff babes, is his security force, which he declares the greatest combat outfit in the world. He invites Kane and Karen to dine with him on his opulent yacht that night.

One thing retained from the first volume is the somewhat-explicit sex; Kane and Karen head back for Kane’s junk, the Wu-Li, and get busy posthaste (“One finger found her dewy crevice and he felt the warm slippery passage tightening, aching for him,” and the like). Later in the book Kane also scores with Jessica, the British beauty who figured so heavily in the first volume; as for his other casual bedmate, Michelle, she stays off-page for the duration, off on some trip for her dad’s business or somesuch. If you’ll recall, she was the one captured in the first volume, with Kane desperate to save her; this time Karen gets the honors, as of course it turns out Mica Island is a hellhole of brainwashed employees and, to quote the Eagles, “You can check out any time you like but you can never leave.”

The schtick is that Mica Island is where the rich and powerful go to get cured of their various hang-ups; in just a short time it has become known for curing any addictions or other undesirable behaviors. Mica’s got a world-class psychiatrist at his disposal, but soon Karen, herself a behavioral specialist, detects something is up, as even this guy has no idea how Mica is curing people so quickly. But as mentioned this installment’s a bit pulpy; it’s clear from the get-go that Mica, that depraved genius, is beaming subconscious signals onto the island. I mean good grief, there’s a sign over all the beds demanding that people wear the provided headphones while sleeping. Mica and his people insist the headphones just play harmless white noise to aid sleep.

Meanwhile back in the real world Kane learns that all kinds of mysterious stuff has been going on at Mica’s place; none of the natives hired to work there have returned. Kane’s buddy Ganja (good grief how I wish I had a buddy named Ganja) tells him of one particular guy who took a job on the island to pay for his wedding, but suddenly sent his fiance a terse note stating that he was staying on for several more months. We readers have already seen this guy get the forced brainwashing treatment employees receive for not wearing those damn headphones at night. Ganja of course is back from the previous volume, as is the rest of Kane’s network of buddies and colleagues, including cipher-like Miles, another ‘Nam pal who I don’t think even appeared in that first volume.

At least this time we get to see Miles at work; he and Kane scuba dive onto Mica Island and scope it out, leading to the first of several action scenes. The action is very much in the blockbuster movie mold, not overly gory or even bloody, with Kane using his customary Magnum revolver again. This I felt was the action highlight of the book, with the two here to save Ganja, who has gone undercover as a new recruit in Mica’s security force. Oh and the sadistic security force leader is named “Major Frank,” folks. Surprisingly Ganja doesn’t get brainwashed, as he foregoes the headphones (as any sensible friggin’ person would do) and is instantly outed as a spy.

Curiously though the book sort of runs out of steam, no doubt due to the still-unwieldy word count. By this point not only is Karen brainwashed, but Kane’s learned that Mica intends to brainwash all the bigwigs of the world in his insane quest to ban nuclear weapons. In a belabored setup Jessica goes undercover on Mica’s yacht, with Chief Bukowski (another recurring character) posing as her security guard, and here they learn the brainwashing mechanism is stashed on the yacht itself. However, and folks I kid you not, Mica has a notebook with the workings of the mechanism, including a section headlined “how to reverse the brainwashing process,” and the finale turns out to be a race to get hold of this particular Maguffin. Worse yet, Mica disappears in the finale and another character tells Kane what has supposedly happened to him.

I do like the beach read vibe of the series, though it wasn’t as heavy this time around. In fact, very rarely did I get the impression this was taking place in the Caribbean. But I also like the large cast of characters; even Kane’s old CIA boss-enemy, Weaver, makes an appearance, and late in the novel we meet one of his operatives, a black guy named Brock, who seems primed to appear again. Anyway, this one, despite being an insane 280 pages, was a fairly quick read – and hopefully so was this review.
Posted by Joe Kenney at 6:30 AM