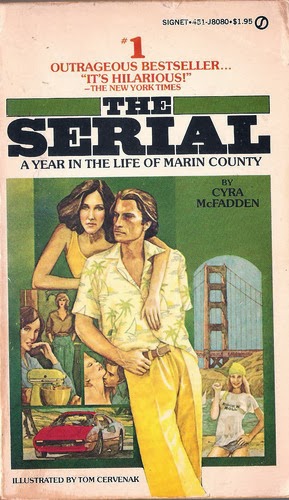 First published in weekly installments in an “alternative” Marin County newspaper in 1976 and then in hardcover the following year, Cyra McFadden’s The Serial lampoons one year in the New Age mid-1970s Marin County, California. The book was a bestseller, and even scored a film adaptation in 1980, but I’d never heard of it until coming across this great post on The Moderate Contrarian.

I’ve long been interested in the ‘70s self-help/New Age craze, from biofeedback to Pyramid Power. I never realized there was a novel out there that was all about those things, and specifically about the flaky people who’d jump from one fad to the next, and so was very excited to discover it. However “flake” turns out to be the operative word here, as the characters in The Serial are such self-involved narcissists that they rob the tale of much impact.

The novel also lives up to its name in that it’s a serialized, soap operatic satire about a large cast of goofy characters, made up of 52 short chapters which each end on a punchline (which sometimes are a little too forced). The focus is on comedy rather than character or plot, and indeed the characters really stay the same throughout the book, despite jumping from one mid-‘70s “self-improvement” fad to the next.

But again this serialized nature just robs the novel of impact, as McFadden is more concerned with setting up the latest chapter’s mini-plot, doling out a few jokes, and then wrapping it up so she can move on. In other words, there’s no grand plot for the novel to build toward. But then, one could also argue that the book is moreso a collection of short stories rather than a novel per se.

Anyway our two main protagonists are Kate and Harvey Holroyd, a couple married for over a decade and who have gone through the vast societal changes of the ‘60s and ‘70s. Whereas ten years before they were the average middle class, meat and potatoes type of American family, they’re now (well, Kate is at least) into meditation, female empowerment courses, human potential development, and etc, etc. They talk to their teenaged daughter Joan like she’s a fellow adult (sorry, “fellow human being”) and don’t play “the parent game.”

However, given McFadden’s satiric theme, there’s absolutely no love in this little family. Kate and Joan treat Harvey like an enemy throughout the novel, and after the various trials and tribulations they all go through, very rarely sticking together, you have a hard time buying McFadden’s eleventh-hour “family back together again” resolution in the final chapter.

In fact, emotional content doesn’t exist in this novel. Which normally I’d be fine with, as I’m a pretty emotionless guy, but still. Kate and Harvey are the core of the novel, and a major part of the story is the changes they go through, with Harvey often going off and Kate pulling him back…and you start to wonder why he returns to her, given that McFadden never once gives us a single moment in which the two characters show even a modicum of warmth for one another.

The cover compares The Serial to Mark Twain and other American works of satire, and given that, I guess one should judge the novel moreso as a spoof or comedy. Documenting one harried year in Marin County, the novel has the Holroyds going through several new fads and beliefs, from Kate’s tentative attempt at lesbianism to Harvey’s brief tenure as Marin County’s #1 stud. As mentioned the stories were first published in a newspaper, so there’s nothing very outrageous about The Serial, ie no explicit sex or anything, however the odd curse word does show up – it was an “alternative” newspaper, after all.

The story opens at a wedding – the fifth marriage for Kate’s friend Martha, this time to a guy named Bill, who Brady Bunch style combines his kids from previous marriages with Martha’s; their liberal approach to “parenting” serves up several laughs in the novel. Martha and Bill factor occasionally into the story; McFadden juggles a fairly large cast, with Kate and Martha at the center of it all. However you do sort of confuse the many characters after a while.

From the opening marriage we move on into a scattershot story in which Kate and Harvey go through even more changes. Some of it’s funny, some of it’s padded, McFadden obviously trying to come up with enough material to fit the 52-chapter template. And for that matter, the print is friggin’ huge in this mass market paperback edition, which by the way retains the funky black and white illustrations which also accompanied the original newspaper and hardcover publications.

One thing I noticed is that McFadden doesn’t much elaborate on the various fads. For example we learn that one minor character has been through “Gurdjieff, Silva Mind Control, actualism, Human Life Styling, orgonomy,” and etc, but McFadden never tells us what those things are. That being said, McFadden does occasionally namedrop various persons/beliefs that I’d never heard of, which lead me straight onto Google (for example Leonard Orr, whose anti-dying teachings are mentioned by a character). But then, I’m lucky enough to have a search engine at my disposal; I’d imagine a lot of this material was lost on the average ‘70s reader, who had no avenue to find out more of what McFadden was writing about.

Harvey and Kate aren’t the best protagonists; Harvey at first comes off as cynical and sarcastic, and I figured through him McFadden would mock the whole Marin County New Age movement. But this comes and goes, and in the long run Harvey’s too spineless a character to do much of anything. Kate however is much worse. She’s such a self-involved shrew that you have little empathy for her. Certainly one of the jokes of The Serial is that these characters, despite their insistent wish to “be open” with one another, are so self-involved and narcissistic that ultimately they could care less what the other person has to say. But the joke grows thin over 300-some pages.

The serialized, soap opera storyline covers a lot of ground, from Harvey getting kicked out of the house and hooking up with a younger woman (who’s even more New Age-focused than Kate), to Kate trying to start a few affairs, with zero luck (the funniest being the dog groomer who turns out to be gay), to Joan joining a few communes, to Kate herself joining a commune (and of course, her fellow communers are a bunch of backstabbing bastards). Groupsex, that other ‘70s hot topic, even gets a mention when Harvey ends up with his secretary, Ms. Murphy, who soon enough has Harvey attending orgies with her – and Harvey’s moreso concerned that his back is going to go out on him.

One of the contemporary industry reviews stated that The Serial would best be read one chapter a week. I think that might be a good idea, as reading it like a “regular” novel no doubt dillutes the impact; some of the jokes are too similar, and you start to get sick of the lack of emotional content or characterization. Another problem is how forgettable the novel is; writing this review a little over a week after finishing the novel, I can barely remember any of it.

A film version of The Serial was produced in 1980, with Tuesday Weld as Kate and Martin Mull as Harvey, but I’d wager there’s no way it captured the full ‘70s flavor of the source material. However it was recently released on DVD, so maybe someday I’ll check it out.
Posted by Joe Kenney at 6:30 AM

That cover makes it look like the world's worst Choose Your Own Adventure.

Isn't there a comical guru character in it? I've seen ads for the movie, with Tommy Smothers (!) playing the part.

Fake or ridiculous gurus, and similar things (like communes that are really full of "back-stabbing bastards" that you mention), got overdone by comedians so early on, that they were already a sort of comedy cliché IN the late ' 60s, let alone when this was written. So I have a built-in problem with the jokes about that kind of subject, except once in a great while.

Thanks for the comments, guys -- Nick, now that's all I can think of when I look at the cover! And Grant, you are correct, the whole "commune people turn out to be just as back-stabbing as regular people" cliche was already stale by the time of the novel. In fact I was hoping McFadden would go an unexpected route and have the commune folks actually be with it, but it didn't happen.

Speaking of the "unexpected route" when it comes to such characters, that's why I usually prefer ones like the hippie in THE PRESIDENT'S ANALYST (played by the singer Barry McGuire) - he's both comical AND "the real thing."

The movie is hilarious. How can you not love a movie which has Christopher Lee playing a gay leather biker?

Why the 1970's? The term goes back to something like 1908, and if you look a Crowley and the Golden Dawn are more or less the same mindset.