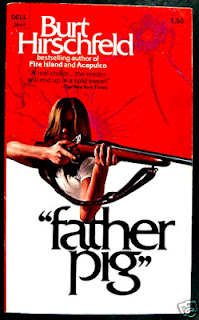 This novel is very unlike any other I've yet read by Burt Hirschfeld. Here he tackles the generation gap, turning it into an actual war, with hippie kids plotting the deaths of their parents. I also get the feeling that Hirschfeld had a tough time writing Father Pig, as the novel seems to lack a certain something...for one, it's very short, and something about it just feels too rushed. Also, Hirschfeld states on the acknowledgement page: "Only the continuous encouragement, the editorial help, the faith of my wife, Terry, made it possible for me to write this book."

Hirschfeld makes little mystery of which side of the gap he's on. The hippies in this novel are murdering scum, and the saddest thing is Hirschfeld never bothers to explain to us what makes them tick, why exactly they want to kill their parents. It's only learned, late in the book, that they're part of a Weathermen cell, but beyond that...how did they come up with this exact plan? It's inferred -- by the parents themselves -- that the kids are just killing their parents as an obvious statement of their hatred of the older generation, but still, something just doesn't gibe. Reading this novel, you get the feeling that every longhaired kid is a parent-hating psycho, just biding their time until they can hack mom and dad to death with a machete.

The heroes of the tale are Charles Livingston and Floyd Breed. Livingston is a typical Hirschfeld protagonist, a successful middle-ager who has come into a vast fortune as a talent agent. He lives in a posh NYC penthouse suite and is currently busy mollifying his Jerry Lewis-esque client, who's throwing tantrums in Vegas. Breed is a different sort of Hirschfeld protagonist, a salt of the earth type who lives in a hamlet in North Carolina and provides his services as a hunting and fishing guide. Throughout the first half of the novel, Hirschfeld plays on the similarities and differences of the two men: both are WWII vets, both are parents of college-age kids, but both went on to vastly different lives.

Again, Hirschfeld makes his bias easily known, as the Gary Cooper-esque Breed comes off as the stronger of the two, with Livingston constantly comparing himself to the man, and finding himself weaker. What brings them together is when Breed is attacked in his house by a knife-wielding hippie. Breed fights off the kid and then, instead of calling the cops, travels up to New York City, because he's sure the hippie who attacked him was a friend of Breed's daughter, Eva.

Breed hasn't heard from Eva in a year or so, and the two aren't the closest. Breed raised the girl alone after his wife was killed in a car wreck, and he and his daughter have little in common. So he goes up to New York, finds out that Eva hasn't attended college in months, and also discovers that the girl has disappeared. Breed then tracks down Eva's associates, and finds out that she was dating a boy named Kenneth Livingston, another long-haired student who has also dropped out of college.

Kenneth is of course Livingston's son, and Livingston too hasn't been in touch with his kid for a long time. But Livingston could care less; he raised his son to be independent, and figures he can take care of himself. He is also certain that Kenneth and Eva are just off having a good time, and thinks Breed is a fool for suspecting them of being involved with murderers -- in a subplot, we see yet another hippie kill a redneck-type couple, but this time the killer is caught, and sure enough Breed recognizes another of Eva's friends.

The first half of Father Pig appropriates the feel of The Searchers, with Breed and Livingston going about NYC in search of their kids, looking into stores and coffee shops and etc. Psychedelic-era New York City comes to life here, but Hirschfeld moreso uses the scene to further play on the gaping differences between Breed and Livingston. Throughout, Livingston still believes Breed is nuts and won't harbor the idea that his own son is plotting his murder.

Anyway, Breed is right -- the kids are plotting their deaths. We only get minimal insight into the workings of Eva and Kenneth; Eva seems to be the mastermind, working as a sort of operations command center. The various hippies call in to report to her on their status, and Eva pushes them on, insisting that they see the job through. There are a few other hippie-terrorists besides, including the son of a prominent author who begins to have second thoughts about murdering his folks.

As Breed and Livingston search on, more murders occur, and in each case the killers scrawl "Father Pig" in red ink on the walls, in true Manson Family fashion. Breed and Livingston part ways after failing to find their kids, but not before Hirschfeld gets to throw in a mod-psychedelic party that the two attend, Livingston of course picking up a hippie chick. After which Hirschfeld focuses on Livingston, who becomes the main protagonist, traveling around for work, picking up various starlets-to-be, wondering if Breed is correct in that his son is a murderer.

The last quarter of the novel again shows a different side of Hirschfeld; after various murders and surprises, Livingston finally realizes that his son is trying to kill him, and so lures the boy up to his cabin in the New York woods. Here Hirschfeld plays out a suspenseful scene of father and son trying to kill one another in the dense forest, laying traps, shooting at each other, even fighting hand to hand.

Father Pig isn't the best Hirschfeld I've read, but it isn't a bad novel by any means. It just isn't as sleazy as it wants to be, nor as horrific. I really wanted more insight into the workings of the Weathermen cell, more action from the hippie-terrorist point of view. On the plus side, Hirschfeld does reign in his writing here, delivering a taut narrative with no fat. He does still dole out the occasional goofy bit where he, as is his custom, tries to plumb the psychological depths of his characters, like here when Livingston sits in his Vegas suite and wonders over the chaos he has made of his life:

No clear image remained when Livingston woke. The girl was gone and only the female scent of her lingered. After a hot tub, Livingston sat naked in a deep chair near the sliding glass doors that opened onto the generous patio.

Desert heat washed over his chest and legs; and on his back and shoulders the cool bite of conditioned air. He felt divided between two opposing worlds, responsive to each but in control of neither.

"In control of neither?" All he has to do is shut the door or turn off the A/C! Hirschfeld also works in his customary sex scenes, though the majority of the women in question are young bimbos, either brain-fried hippie girls or actresses desperate to become famous. But then I figure this is another of Hirschfeld's gambits, showing the dichotomy between the generations.

So, a different side of Burt Hirschfeld. Not a better side by any means, just different. Finally, it seems that Father Pig is one of the more obscure books in the Hirschfeld catalog; I've never seen a copy in a used bookstore and had to get mine online.
Posted by Joe Kenney at 6:30 AM

Great review, as always. I have yet to read this novel. You should have told me, I would have sent you a copy. Relatively easy to get here in Montreal.

Martin, where have you been?? Thanks for the comment, good to hear from you. Someone posted on my Fire Island review that they discovered somwhere on line that Hirschfeld passed away in 2004. Not sure where they found that, but at least it gives us a date...hard to believe the guy is so forgotten today.

I'm good. Hope you are as well. 2004, huh? Finally a bit--if sad--news. I think Hirschfeld would have loved it knowing he's remembered by fans like us. Keep up the good work.

Great post. Sent you a couple of e-mails re a little pulp related project I and another Melbourne writer are working on, not sure if you have received them. If you have, then maybe you can drop me a line at andrewnette@gmail.com
Cheers,
Andrew Nette
www.pulpcurry.com